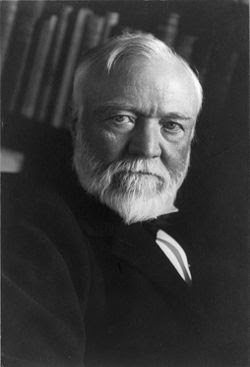 Andrew Carnegie built libraries as pharaohs built tombs, to last. So they do, the Carnegie Libraries, here, there and everywhere, from his native place in Scotland to towns and cities, large and small, across America. Monuments all to sound construction, economy of purpose, and the civic benefits of quiet study, Presbyterian thrift and laissez-faire rapacity. What better legacy for the author of The Gospel of Wealth and Other Timely Essays? True, as then Senator Harry S. Truman once said, Carnegie’s libraries are “steeped in the blood of the Homestead steelworkers,” but what pyramid was ever built but by sweated labor, or raised but on the bones of men who built it? The Carnegie library I most recently visited is a handsome, if hardly pharaonic example. Built in 1910, in imposing red brick and white wood trim, the building perfectly expresses something of its benefactor’s pious self-regard; showing a bright, dignified front, with a dim and largely vacant interior.

Recently renovated to within an inch of its original purpose, this public library now boasts a new “meeting room,” sixteen computers, expanded telecommunications systems, DVDs, plush furniture, and, on my last visit, not one patron reading a book. It seems books are now the least of the library's many amenities. Such as survived improvement, tend, naturally enough, to be of an improving kind: how to do one’s own taxes, learn karate, buy and sell real estate, achieve a healthy pregnancy, fix plumbing, lose weight, save a troubled marriage, find God, make a fortune.

Carnegie, I do not doubt, would have approved of the improvements. He was an eminently practical man, his gospel heuristic, his libraries, however ornate the architecture, factories, the books therein tools for the shaping, crafting and machining of keen new Americans on the Carnegie model: materialists every day but Sunday, and Devil take the hindmost.

The Old Boy would be shocked, nonetheless, I think, to find so little of Shakespeare, of Milton, of Burns, of literature on the shelves of his bequest. Here a sad Austen and there a stray and ugly Thackeray, a Twain or two, a Dante, but no attempt at making a representative showing of the" works," nothing to recommend what is best, no undemocratic preference shown, nothing to suggest any book might be better than its neighbors. Meanwhile, whole yards of case were devoted to the lowest kind of entertainments; yesteryear's bestsellers, insipid romance, vulgar shockers, the violent, reactionary nonsense of military thrillers; the undifferentiated detritus of past popularity, lazy acquisition, forgetful donation. What a gloomy prospect for the graduate of the overstuffed children's corner! But then, there likewise, Seuss is swamped in a sea of pap, Alcott lost amidst improving fables of first menstruation, Sendak and Stevenson and Baum no better represented than bugs, boogers or the banalities of movie-star moms turned picture-book makers.

Any public building, in an English speaking country, with more books by Anne River Siddons than Charles Dickens is not a library, but a hotel lobby. "Access," that shibboleth of contemporary Library Science, via the Internet and the inter-library-loan, is meant to explain away the pathetic selection on the all too empty shelves of a mere branch library. One would have to know to ask, of course... But the fundamental purpose of any public library, of whatever size, whatever budget, whatever history, is not to just to make information accessible, (to that end, why bother stocking any books at all, in this, our miraculous computer age? With the click of a mouse, a child of five can find the whole of the Encyclopedia Britannica.) A public library represents a public trust. Within its walls, on its shelves, a reader ought to find something of the best of our literature, history, philosophy, wisdom and art, and not just a stray volume, but a representative collection of our best books. The expectation that superior taste, education and experience ought to have if not the only, then at least an apparent influence on the selection and preservation of a public library's books is neither snobbish, old fashioned nor unreasonable. Else why the required degrees to sit behind those handsome new desks? Is the modern librarian really no better than a gatekeeper for Google? A drugstore clerk, maintaining order in the magazine racks? A Salvation Army volunteer?

I've seen books better weeded, and better books, in a garage-sale than I found in this public library.

I do not begrudge any library its improvements. I will vote every bond on every ballot. The work of librarians is hard, often thankless, more often than not accomplished with more enthusiasm than money, so any resource that might make their task easier, their operation more efficient, their environment more inviting, is money and enthusiasm well spent. Would that a little more of both had been spent on books.
Posted by usedbuyer 2.0 at 8:44 PM