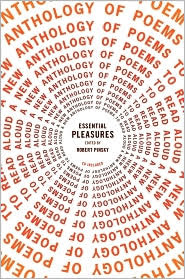 I've heard that before, from booksellers even, even on the committee of booksellers I joined last year to, among other things, award a prize in poetry, if we wished (we were not obliged to do so.) I understand. I do. If one's education was no better than mine, and mine now has at least the charm of some antiquity, poetry was taught, if taught at all, badly. In elementary school we memorized simple rhymes to help us spell, tie our shoes, remember rules of grammar and good conduct. Later, we might have learned a little poem here or there, to recite. Civic minded youngsters, lacking better entertainments then, in a town with one movie house, three channels of TV and two radio stations, joined The Grange, as I did, or The Scouts or some such institutional recreation, and might, when called on to entertain the elders, come the Fourth of July, stand and let fly with a trebled toot of John Greenleaf Whittier or Emma Lazarus, but even in my day, such occasions were becoming rare. Later still, in junior high and high school, the real damage was done. When a poem happened in our texts, there was usually a groan, not at the poem, or poetry, of which we knew next to nothing, but in anticipation of the "teaching" of it. No lyric ever sung, no light or heavy matter, no joke or rhyme ever made, survived the dunning monotony of dull analysis; graphing "schemes," detailing "themes,"the picking to bits of a beautiful living thing into so many scraps of dead gut, dry bone and snapped sinew. Woe to the poet still living who consents to be anthologized in a literature text. Woe likewise to the shade so memorialized. You will be taught. Is it any wonder then that "This Is Just to Say" has lost more readers for William Carlos Williams by being in a textbook than he might ever have hoped to gain had he lived to write as well for another hundred years? How much "mud-luscious" and "puddle-wonderful" poetry by Ezra Pound can survive the average Education Major's "classroom discussion" of the Imagist Movement?

The average, American, English teacher, having had no better education than my own, only more of it, is no better qualified to "teach" a poem than the average gym teacher is to conduct a ballet class. Just as gym and ballet both move bodies but to different ends, namely exercise and art, the two activities, teaching English and reading poetry, share some vocabulary and some ancestral urge to say, but in my experience, there the resemblance largely ends.

And that's a pity, because generations now have lost the knack of reading aloud and reading aloud is how poetry is best learned. How language comes to us; in sound and inflection and tone and gesture and expression and rhythm and rhyme, is what poetry is made of. Poetry, literature, is our language shaped by skillful minds, made better by practice, tempered, expanded, refined, transformed, exploded, bent, made beautiful by craft, made art. That's it. If the craft can be taught, then let those inclined to learn it, study, but one does not need to teach a child composition, or even a scale on the piano before he hears or sings a song, listens to a symphony or owns an ipod.

Who, in this, our thunderously musical age, would even think to require music theory as a prerequisite for lullabies?

Many of my fellow committee members, as traumatized as I by the good Masters & Doctors of Education, as disinclined as I once was to put a poem in their mouths for pleasure, having only had them given in school as punishments or pills, balked at reading poetry. But to read a poem aloud is to remember how good words can taste. Declamation is reclamation! One needs no degree to read aloud Leigh Hunt. Try it. Try this, read this poem this way: take a breath before the title and then let it all out after. Take another, then read the lines and leave a beat at the end of each. Emphasize the verbs, and follow the punctuation.

Jenny kissed me when we met,
Jumping up from the chair she sat in;
Time, you thief, who love to get
Sweets into your list, put that in;
Say I'm weary, say I'm sad,
Say that health and wealth have missed me,
Say I'm growing old, but add,
Jenny kissed me.

Now do it again, out loud.

The American poet, Robert Pinsky, has a new anthology, in which this poem appears, on page 371. The title is Essential Pleasures: A New Anthology of Poems to Read Aloud. It is published in hardcover for $29.95, by W. W. Norton and includes a CD of poems being read aloud. The selection is wide and good, the introductions sometimes more technical than may be good for his purpose, but as the editor himself says, "Analysis can refine and enrich understanding of the feeling and the ideas, but the fact of the actual words is primary and essential: you can hear it."

And how else or better to "hear it" then to say it, out loud?

Do try. If one is shy, one might slip behind a locked door, in an empty house, or read aloud to the cat -- though be prepared for the cat's indifference. But do it. Open this book to any brief poem, any title that takes your fancy. Read the thing once, but without too much analysis, just to let the words go by, to find the commas and the verbs, and then, take a breath...

and say the poem.

One doesn't need to know what a "rondeau" is to know the pleasure in Jenny's kiss. Trust me. Better, trust the poet. Trust the words, their ours. Trust the voice, say the poem.
Posted by usedbuyer 2.0 at 12:47 AM