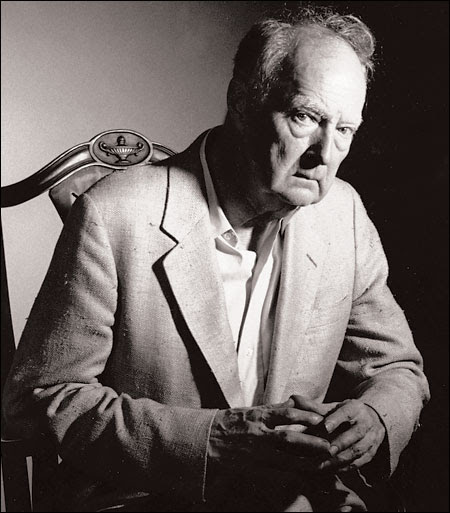 The last great American literary failure is finished, the second law of thermodynamics biographically illustrated yet again in the final coming to cold rest of an isolated, much agitated old body. James Purdy is finally dead, at 94. How he would have howled at his much anticipated obituaries! The New York Times yesterday summarized him as a "darkly comic writer," going on to describe his work as "wayward and unclassifiable." A few of his periodic champions are mentioned: Gore Vidal, Edith Sitwell, Angus Wilson and John Cowper Powys, but too few, he might have said had he seen the list, and these, by his lights, predictably dismissed as having admired his work "extravagantly." To that brief list of admirers, they might have added Dorothy Parker, Thom Gunn, Paul Bowles, Tennessee Williams, Marianne Moore, Katherine Anne Porter, Edward Albee, and even, occasionally, The Times. Not that it much mattered who praised him, at least to his sales, his critical reputation, or his singular sense of grievance.

From his first submission of short stories, to the forthcoming publication of his collected plays this coming June, James Purdy spent his writing life in anticipation of rejection and in opposition to commercial and critical success. He had, from the beginning, patrons -- his first two books were printed privately, at the expense of gentlemen friends, and sent to literary celebrities, like Sitwell, who then declared him a genius. He always found publishers, friends, admirers, readers, but the success he wanted, that he felt his writing deserved, was denied him, actively denied him, he was convinced, by a cabal of reviewers, homophobes, prudes and villains, knuckleheads who failed to do him justice; publish his words as written, promote his work, recognize his place in American letters, make him famous, make him rich. The regular endorsement of the famous, the periodic revival of his reputation by writers like Vidal, Purdy relished, referencing Sitwell's early and genuine praise, for example, decades after her death, and after her own reputation had long since dimmed, but his long obscurity, as he continued to see it, and his very real poverty, could only have been the result of the machinations of his many enemies, real and imagined. They had kept him down, denied him. How else explain his failure? That he wrote well, he knew from the beginning. That his writing was provocative, he understood, acknowledged, and defiantly refused to alter, as if he might have done, had he but condescended. He wrote about rough, inarticulate, marginal people with strangely exotic, yet entirely possible American names, about drag queens and unpublishable poets, panderers and scissors-men, old maids and murderers, damaged veterans, queer seducers and rapists, real people, or so he regularly claimed, and true stories, however bizarre, about race and violence and bloody revenge, stories he'd witnessed himself, read about in the papers, been told by his grandmothers. He told his strange fables in a style recognizable as part of a long American tradition, claiming direct descent from Hawthorne and Melville, conceding cousinage with Faulkner, and O'Connor, and was frustrated not to have known more of their respectability and success. His characters thought and spoke in the demotic, but his own language was spiced with arcane words and weird, biblical locutions, encumbered by a sometimes painful aestheticism, a frank pedantry, a fussy insistence on the significance of everything he wrote being art, being beautiful, being true, damn it. His self-importance was off-putting, his sense of injury and entitlement reminiscent of Frederick Rolfe, who thought if he was to be a Catholic convert, he ought at least be made Pope in the bargain. Purdy's humor was black indeed, more so for being at times, like Rolfe's, unintentional, always furious and coming, unlike the romantic Catholic Rolfe's, from a bleak Calvinist theology, where enlightenment was hubris, love the only salvation but impossible, grace unlikely but tantalizingly real. His Jacobean plots he insisted, were no stranger than the day's news, than American history, than his own failure to be widely appreciated. When he laughed, it was bitter, long before he lived to be so old and wise.

I saw him read once. He was being feted by an organization of gay publishers, writers and booksellers, given an award for a lifetime's work, and that was twenty years ago! He looked already, to my young eyes, like an ancient, the last survivor of a unregreted yet gilded, pre-Stonewall incivility when to be obviously, defiantly queer was to be shockingly, dangerously individual. When he stood to read after a fulsome introduction, and sustained applause, he seemed less pleased than pissed, his large tired eyes surveying the crowded audience with something like disdain for so small an audience, and so minor an occasion, such a minority endorsement. He was gracious to his hosts, but did not seem to know or much care just who they might have been. He expressed himself much moved by his kind reception, but in a voice weighted to weariness, reduced to a dry monotone, in which he then proceeded to read, and read, and read aloud, from what I no longer remember. The reading, presumably unscheduled, certainly unexpected at such length, went on and on and on. Twice, myself and a table-mate, slipped as quietly as we could to the open bar, to renew our fortitude. By the time he'd finally droned to the end, our shoes were off, my companion's stockings rolled to her dimpled knees, our feet up. The applause this time, when it came, came late, only after we'd had his concluding called to our attention by the mistress of ceremonies returning to the microphone, where she made a quick joke about the lateness of the hour. Purdy by this time was already seated again on the dais. I remember noticing that now, having brought the celebration to a grinding pause, he was smiling at last.

As Oscar said, "experience is simply the name we give our mistakes," and Purdy's experience was long. If his achievement was not all to which he felt himself entitled, it looks to be lasting, his status as a minority classic secure. Perhaps his greatest mistake, and his self-conscious triumph, lies in refusing the place to which he is likely to be assigned. He did not relish, it seems to me, being a favorite of the coterie, yet could apparently write, and live, no way other than he did. He refused his fate for 94 years. That is admirable, if appalling when one considers the personal consequences of his choice, the cost of his integrity. There seems to have been for him no particular happiness, even in creation, no prelapsarian moment, even as he wrote and wrote and wrote. He had no muse to comfort him, only harpies. Inspiration pestered him. He agonized over his writing, making it as perfect as he could, always knowing, as I said above, that it was good, but not so good, or as he saw it, so bad as to ever be popular. He worked towards Heaven, convinced he was worthy, but sure of failure, unsure of admittance, of grace, of God. In a rare interview late in his life, he described something of his working life as a writer, where he drew his stories from, how he loved his characters even as he followed them into Hell, how his inspiration carried him but only so far, "... I only see myself as a receptacle up to a point, as sometimes the story comes out partially formed. Then the really muscular work begins. The sledgehammer work."

The reader of James Purdy is fortunate to have the work, when he or she can find it, that came of all that embittered labor.
Posted by usedbuyer 2.0 at 1:50 AM