A Bit of Mournful Rustling 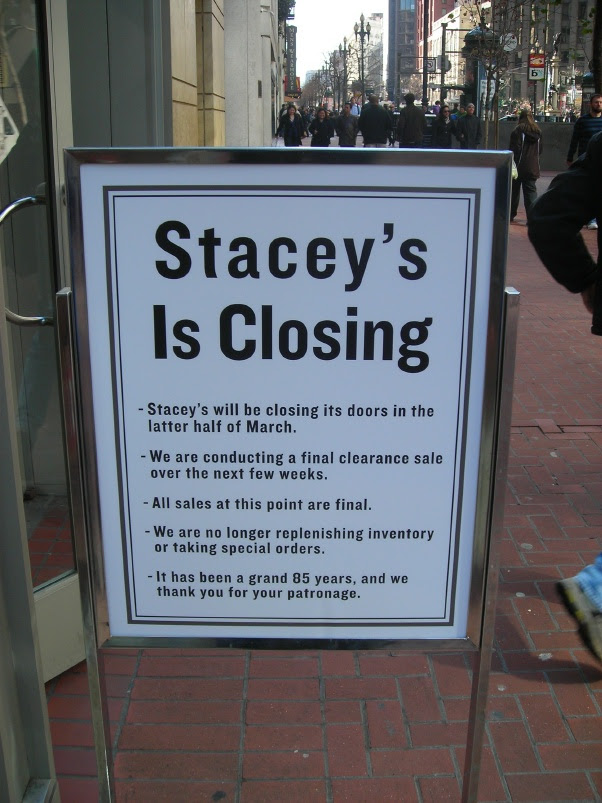 Stacey's Bookstore, in San Francisco is soon to be closed. My oldest friends there are there no more, already gone before the doors close. The bookstore's hardworking events staff held their last noontime reading, just today. My old friend, C. wrote a brief history of the events at Stacey's, from her time forward, at The Swivet.

But I am older still, and turning "the leaves of memory" tonight, I am reminded that "in my youth," before the innovation of coordinated events, the bookstore hosted many authors, celebrities and the like; business and technical lectures, as C. noted, but also sports figures, local and national, movie and television stars, past their best days, peddling memoirs, regional authors, cookbook chefs, infamous lawyers and celebrated activists. I remember lighting Audrey Meadows' cigarettes, fetching chair after chair for the many fragile fans of Mickey Rooney, Catfish Hunter signing a caricature I'd drawn -- though I could never draw a proper baseball-cap on him. I remember the astronauts, the politicians, the cartoonists from Disney or Warner Brothers, each book signed with an iconic mouse or rabbit. Al Franken stood on a table to address the unexpectedly huge crowd. Mohamed Ali, having spent weeks carefully signing book-plates in anticipation of his appearance at the store, posed for endless photos and performed card-tricks in my office to entertain the staff because he could no longer speak above a whisper. Alistair Cook, a regular visitor to San Francisco and to Stacey's, affably chatted with me about Charlie Chaplin and H. L. Mencken, both of whom he'd know well. The line for Shirley Temple Black stretched the length of the city block or more. Barry Manilow refused to get out of his limo because of an earlier bomb threat, despite the assurances offered by the San Francisco police and B., the then manager of the store, who crawled into his car to try and fetch him out. So many names come back to me: Eartha Kitt, Bette Midler, John Glenn, Michael York -- an idol of my youth and still so dreamy in middle-age I stand obviously tongue-tied and idiotically beaming in the photo someone snapped of us.

Novelists of national reputation tended to read from their work in the evenings and elsewhere, as befitted their dignity as serious artists, but their walkers often brought them to us first, to sign stock and kill time, many times after a liberally liquored lunch. One particularly stewed star of the post-war literary firmament spent so long in the WC, I was sent in, as the only responsible boy present, to see if he intended ever to come back out. He was none too amused, when I woke him. Other, more amiable writers happily chatted with even the likes of me as they signed away half an hour: the dazzling Richard Ford, A. S. Byatt, Ward Just, William Styron, so many others. Stephen Dixon was shocked to be recognized, unaccompanied and unintroduced, likewise David McCullough and Richard Bausch. Susan Cheever, I remember, was not amused at being asked about an unauthorized collection of her father's stories. Nabokov's biographer, hearing my pronunciation, all but patted my head as he corrected me. So many great writers I met in those moments, just "drop ins" but all the dearer to me for the personal time I got to spend with them.

Book signings and the like were managed, to the extent they were, by the buyers then, and hosted by the buyers or the floor managers or anyone else that happened to be available, clean and presentable enough. Because of Stacey's unique location in the heart of San Francisco's downtown financial district, the store's hours tended to limit most such festivities to the early afternoons. (After six o'clock, the neighborhood emptied into the underground trains, onto the buses and the bridges.) The bookstore was not, as a result, often the first choice for publishers with new books to push, at least when it came to books outside the store's business and technical specialties, and yet working there, I was able to meet an amazing array of talented and accomplished men and women. Just one more thing for which I am grateful to that grand old place.
Posted by usedbuyer 2.0 at 7:43 PM