A Brief Introduction to an Old Friend 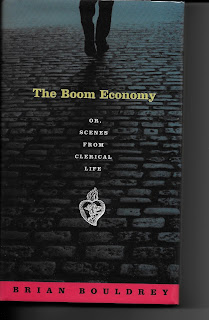 Some of us didn't die. That's obvious now, but it wasn't at the time. Far too many people -- a generation -- did die as a result of acquired immunodeficiency syndrome: friends, family, lovers, strangers, artists, innocent babies and villains like Roy Cohen. People still do die of it, but for gay men of our generation, there was an agonizingly long stretch when it felt like we all would sooner than later. Then a lucky few lived long enough to just survive. New medicines, new hope. New lives? Well, sorta. Pleasantly surprised doesn't do it justice, but calling it a miracle still sounds unseemly when we think of all those for whom it came too late. As Browning said, “how sad and bad and mad it was - but then, how it was sweet.”

Brian Bouldrey's novel is that rarest of fictions that tells the ever-after. I can't really think of another in this context. There were tragedies of course, tributes, valedictories, memorials, memoirs, politics, yards and yards of poetry, and fiction long and short. Much of it was good, all of it was necessary and some of it should last. But who tells us the story after the surprise party, the days, weeks, and years after the happy ending? And who on earth would read it?

Well, not nearly enough did. By the time The Boom Economy, Scenes from Clerical Life was originally published in 2003, the fashion had changed, the news had cycled on, and the market for gay fiction was not what it had been, or so we were being told all the damned time. And this story?

It's 1999, in Vancouver, BC, and three unlikely friends, Isabelle, Jimmy, and Dennis are sitting in a most unlikely bar, and no-one is having a very good time, except us:

"They studied the menus, full of too many choices that tried to span the cuisines: chop suey, burritos, spaghetti, hamburgers. Dennis felt queasy around such icky heterodoxies, common along the Pacific Rim. In San Francisco there were at least four shops called 'Chinese Food and Donuts,' and other stores sold Indian Food and Pizza,' 'Deli, Ice, Bait, and Liquor.' Was there nothing pure left in the world? Sex and food, both nice ideas, but not together. Even if he were his old self, unvested."

Come on. That's delicious because nothing sounds good together except those sentences. And did you catch that last word? Sneaky.

Our hero Dennis Bacchus has not died and neither has his best friend, Jimmy but that is not the story, though it would seem to be the point. Seem. Dennis has decided to become a priest. Of all things. The world is new. And yet, old friends and old habits -- made with every expectation of mortality -- carry on. And maybe that's the point? Remains to be seen.

Meanwhile, the ride is starting again, so hang on. Bouldrey is a traveler of the best kind; excitable, brave, peripatetic and genuinely good company even when or specially when things are not altogether as they should be. Life happens in his fiction and as in life, real life, some of its pretty ghastly but even the worst of it can be entertaining and the best of it quite moving when it is written this well. Even the simplest thing can be beautiful and funny, as when we first meet dear Isabelle, very French, on a train six years earlier:

"Out on the platform, he saw a girl get on, maybe twenty years old at most, in a short skirt that was pink with white polka dots. She had no hat, but she should have had one, to match her little brown suitcase. She was not sacking Europe."

As George Eliot says, "Nice distinctions are troublesome." I would just add that here is another writer who knows how to make the most of trouble. Dennis, our hero, the survivor and would-be priest, is trouble -- also troubled, troubling, and distinctly unsuited for either sainthood or Hell. Asceticism seems to suit him, but then so did being a bit of a sybarite, back in the day.

"He'd been trying to get away from all his stuff for years now, the things, the friends, the sex, the freedom burdens all. But oh, the pleasures (...) Dennis loved the pleasure and its attending pain: the bee's sting that is the price of honeycomb, tickling, the rose and its thorns, attempting to tell a joke to Isabelle in French, buttfucking, a productive cough, horror films, cracking walnuts to get their meat, the goofy, funny last words of a dying friend, the spectacular crash to the floor of an ornate dish."

Perhaps that's another reason this particular novel was denied a proper audience back in the day. Perhaps we were all still a bit too tender? Maybe we weren't quite ready yet to have our assumptions about romance and death and the nobility of our poetic cliches mixed quite so barbarously and brilliantly up and dropped like a sack of angry cats on our doorstep?

Why we should want to read it or reread it now. The spiritual journey of a man redeemed from death would be about as interesting as it sounds. It happens. Meh. But this isn't that novel. Yes, it's about a man in search of all sorts, from assignations to abjuration, from God to guide-books. And yes, Dennis is in flight from his past, from the jokes and the friends and fun that may not have been (poor Jimmy), but that isn't the point of reading it now. It's the voice. That's the point of it now. There hadn't frankly been anything quite like it then and there hasn't really been since, alas.

And the times described, and the characters met, can now be read without the burden of our aching self importance then. Sad but true. Surely the world would note? But, no. There were very few writers of Bouldrey's generation who entirely escaped that rather formal, almost Cornelian hauteur and nobility of profile in the face of you know what. For all his generosity of heart, and the accuracy of his time-keeping, Brian Bouldrey takes everything so seriously that he can't help but occasionally laugh. It is redeeming. Poor, dear, benighted Dennis! Perhaps if he got a decent haircut?

"When Christ calls a man, he bids him come and die." So said the very lamentably long late Dietrich Bonhoeffer in The Cost of Discipleship. I wouldn't know. Theology is not my subject. Maybe Brian could explain that to me, though I wouldn't dream of asking. Questions are better than answers anyway, particularly and perhaps peculiarly in novels. For me, having read my friend's novel again after nearly twenty years, the question he asks is better than the theologian's mystery because the paradox makes me smile. What happens when a man is called to live? No less profound, I should think.  The answer, if there is one, is up to you, dear reader, to find or not herein.

I can't think of better company on the way.