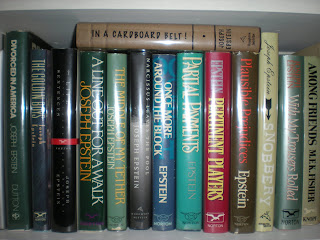 As I've entered what I flatter myself in thinking will be but my middle years, I've found my patience with and or interest in most contemporary writers growing thin. With so many great books yet to be read, so many great authors as yet barely begun, I increasingly feel the sand running and look back now with some amazement at how cavalierly I used to adopt new writers after a single book, collecting and reading as if I had all the time in the world to, say, read my way through Balzac some later day. In the meanwhile I would read every new book, as they were published, by Reynolds Price or Richard Ford or A. N. Wilson. Why not? I would read backward from the point of adoption too, so that I might "catch up with" Colm Toibin or Richard Bausch or Kenzaburo Oe. Then the day came, around roughly my fortieth birthday I would guess, when my response to a new novel by Ann Tyler ceased to be "Look! A new Ann Tyler!" and instead became something like "Look. Yet another new Ann Tyler." Nothing to do, you understand, with the quality of Ann Tyler's work, as consistently, mildly entertaining as it ever was or is likely ever to be, nothing even to do with her prodigious output, though in her case I did have pause when she began to require more than one wide shelf to herself. I might still read each new book, but I became likelier to buy it, add it to the shelf and buy the next with the last still unread. Eventually a new rule was adopted: three "new" books unread, and the next could wait until it was remaindered. Thus, I fell behind but had the possibility still to one day "catch up" all over again, at a more affordable pace. The day came though when, for example, Richard Ford wrote a novel for which I simply did not much care. Reynolds Price started reading the Bible too closely. A. N. Wilson stopped reading the Bible, or going to Mass I suppose, and, while I liked him all the better for it, I let three, then four, then five books go by. Colm Toibin I've kept up with, but I could not go back to gather his Irish nonfiction after finding his book about Lady Gregory, the Irish National Heroine and bore. Oe, by the publication of Somersault, ceased for me to be bearable. Again, no fault of the author, but because I lost patience with my own incapacity to read anything else while reading him, and simply could not read Oe at such unbroken length without breaking up. (Coming up at last for air from that book made me understand something of what the bends must do to divers.)

The day came when I sold off all my Ann Tyler, read and unread, without regret, when I might read a Margaret Drabble or not without assuming I had missed something vital, when a short story in the New Yorker was enough Richard Bausch to last me for months or more. I felt bad about all of this, until I bought my first set of Scott, until I'd taken up Balzac at last, until I owned almost all of Fielding. As I said, I might still read Ann Tyler, and did when she wrote a pleasant novel called Digging to America a few years back, but my sense of obligation was gone. I doubt her feelings would be much hurt if she knew I'd determined instead to read through Mrs. Gaskell. (Though perhaps she might, in which case, on the off chance, my apologies, Ann.)

There are few enough living writers I feel obliged to follow now, but Joseph Epstein is one. He is about my favorite living essayist. He is a delightfully fussy writer, yet hilariously, intentionally and sometimes clumsily common, an enthusiast and a complainer, a snob and a democrat (little "d,") a frequently insightful and occasionally bruising critic, a bully and a pal, a man of examined and embraced contradictions. I have never met him, but he has been to me, over the years, a wonderful, avuncular presence. If I was as happy as a relative looking for a loan when he achieved bestseller-status with Snobbery and Friendship, I confess, I prefer him at a less oratorical, more conversational length, in his casual or critical essays, in preference to his more thematically grand recent books. When In a Cardboard Belt! Essays Personal, Literary, and Savage came out two years ago, it was as if he'd decided to sit back down and talk after a tour of the Chautaquas. The greatest charm for me of so consistently delightful, voluble an essayist is that he never exhausts his subjects. At book length, be it about Divorce or either of the two mentioned above, I rather wanted him to digress even further than he did and felt, uniquely in my reading of him, the none too gentle tug now and again, of his awkwardly important theme. But rumbling again with his old snappy, pugnacious ease from gastronomy to Beerbohm to a devastating slap at the late, very late, Mortimer Adler, I was as tickled by what he had to say again as I was the first time I read him.

His latest book is, again, an extended essay, but this time Epstein's subject is charm, as embodied in a single and singularly American artist, a sometimes small but supremely elegant man, a great if unlikely movie star, Fred Astaire. Epstein's is a critical appreciation and his curiosity extends beyond the screen to the man, about whom he can be unsurprisingly, unflatteringly blunt; detailing the weird attractiveness of Astaire's big face, sneering at his toupees and his tight fist, rather coldly dissecting the artistic disappointment of his partners after Ginger, to whom Epstein means to be kind, but isn't really. It is all wonderfully punchy and slangy and awestruck. Epstein can't help but be a little irked at finding a man no bigger or better than himself, yet possessed of exactly the kind of elegance and ease he both envies and distrusts as slightly sissy. (I've often thought, reading his essays over the years, how much happier Epstein might have been had he been taller, or at least a little less defensively small.) The pleasure in this portrait is in the author's incapacity to keep from forgetfully grinning at his pure, if obviously slightly embarrassed delight in watching a man dancing beautifully -- with and without the reassuring presence of various pretty ladies.

As it turns out, Epstein's book is part of a series, Icons of America, from Yale University Press. Today I had a copy of another book, newly out, from the same, Molly Haskell's Frankly , My Dear: Gone With the Wind Revisited. I was pleased to see it, certainly more than I was to see that the rest of the series seems to range from hamburgers to architecture. Sigh. (How I hate series distinguished by no better, less haphazard a rubric than this flabby word "icons." It smells of "American Studies" and suchlike interdisciplinary academic boondoggles.)

Still, I must be grateful to Yale for what it's given me in giving Epstein an excuse, and a fee, for writing such a grudgingly gay little book. At under two hundred pages, it flew by as light and fast as his subject's Swing Time. Joseph Epstein's Fred Astaire is a love letter from a resolutely, determinedly butch, dead-end-kid aesthete to his elegantly sexless, even slightly fey movie-star-crush, and the occasion of a happy hour for a fan of both. It also reminded me how right I was to love and keep ol' Joe Epstein around. He's a good sort, really, is Joe.
Posted by usedbuyer 2.0 at 8:19 AM