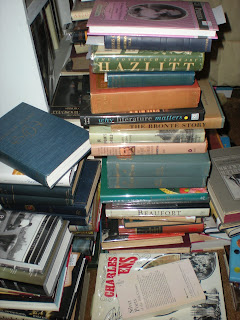 When I was all of fourteen, as I remember it, I experience my first earthquake. It wasn't an actual earthquake, as were the ones through which I lived in California later, but my first taught me something of the shock and confusion I was always to feel thereafter when the world jerked as if by a sudden tug, displacing objects at rest the moment before, knocking some over and, more magically, leaving others still upright but slightly off center. I was asleep that first time, at home, in my room and in my own narrow bed. At the foot of my bed stood my first bookcase: a cabinet of great antiquity, given over from years as a storage place for home-canned-goods to the newer purpose of housing my books. It was a humble piece of furniture, old and well made, but it was never intended to carry such weight as I'd put in and on it. It stood about three feet high and half again as wide and was no deeper than my hand. Into it's shelves I'd crammed perhaps a hundred books or more, and on top of it stood not one, but two cardboard cases rescued for me from... a dump? Appropriately enough if so, as, though I didn't know it at the time, these were the temporary display cases for mass market paperbacks, sent out with sometimes elaborate, three-dimensional decoration and a stand, to be assembled and attached, and called in the business, "dumps." To me, they seemed perfectly utilitarian, accommodating as they did perhaps as many as five paperbacks to a square, three squares to a "shelf," four shelves to a dump, the whole then a solid box of books. Being cardboard, these could be secured to the wall of my room with just tacks. They made something like a proper bookcase, tacked up this way. But having even then more books than I had places to store them, the old jelly-jar-cabinet was burdened not just with these solid-seeming boxes, but piled right up to the low ceiling of my room with more books, stacked, and crammed, and piled so tight as to require considerable effort to pull one from the whole, even if nearly the whole was carefully disassembled to get at a particular book. (You see now, where this story is going, don't you?) The night of my first earthquake, the household all asleep, there was a sudden rumble and a tumbling as off bricks from the walls of Jericho and I was awake in the dark and buried. We lived then, as my parents still do, just off the Interstate Highway, our house passed at all hours by coal trucks, and my father said, more than once that night, he "thought a truck hit us." My parents slept in the room next to mine and the thin common wall we shared was the wall on my side hidden behind books, or was until the old cabinet gave out, the dumps came away and nearly the whole of my library fell into my bed and onto me. When my poor father forced the door, turned on the light and found me, I wasn't to be found, until a good number of books had been pulled off me. My poor mother, thinking I was hurt, rushed to examine me for concussion, for broken bones, but other than a black eye, I was unhurt. My terrified look was not the result of pain, but of the thought that my father, in his angry concern, might have tossed a book too hard in clearing my bed, that some paperback, already injured in the collapse, might be pinned and cocked, broken under the weight of its fellows, like an innocent fan at a soccer riot. It took some very stern words and a cold compress held forcefully to my eye to keep me from spending the rest of that night searching for damaged books. It took some days to reorganize and assess the damage. Surprisingly few books were actually lost, paperbacks being, like small children, surprisingly tough little items. The cabinet and the dumps were a total loss though. Thereafter, I made do with second-hand metal shelves and the pine desk and bookcase my grandmother's last beau, being something of a carpenter, had made for me from scrap pine. (I have it still, filled now with some, though not all of my Library of America books.)

My husband jokes, should we ever have a house-fire, that he knows to save the first editions of Beerbohm before he thinks of saving himself, or me. And I did set our house alight, a few years ago, putting a cigarette out in a box of fireplace ashes in the garage, losing in the process quite a few of my CDs stored there. I like to think, when I put that fire out with a bucket filled in the laundry-room sink, that my first concern was our lives, then our home, then the cars, but I would be lying if I did not admit that the thought of my library, just down the hall, didn't flash through the smoke and the heat.

My dear friend R. had an apartment fire years ago, not long before I met him, and whenever some grim happenstance has befallen either of us since, he has slyly kept perspective for us both by saying, again and again, "I don't know that I've ever told you, but I lost everything in a fire." (My role is to feign ignorance each and every time the subject arises.) Poor R. did in fact lose nearly all his worldly goods that night, fleeing the flames just in time to survive, and, I believe, in just his shorts. Later he was able to fish a few photographs and trinkets from the ashes, but among the things he lost in that fire were all his books. When he and I became good friends, he was determined to remain detached from material possessions, refusing, at first, to replace the books he'd lost. Over the length of our friendship though, I have worn down his resolve and his apartment, once again is all but impassible in places for books -- though nowadays his fascination with fish means that the many aquariums he keeps not only make the place prettier, but seem at least to provide something of a potential fire protection system, if not for himself and his precious fish, then for the old building as a whole or at least the tenant directly below.

In my experience of actual earthquakes, my old oak cases, acquired one by grudging one for me by my husband, weirdly never fell, in even the worst quake I experienced, in 1989. Some standing as high as eight feet, and weighted even then with hardcover books, often as not shelved two deep, these never fell but merely skipped, as if rocked out to the middle of the floor by poltergeists, shedding and shattering picture-frames and mementos, but very few books.

I was managing the branch store on Sacramento Street in San Francisco, for Stacey's, when that same quake hit in the afternoon, and there likewise, while we lost a window and power, very little stock so much as fell off the shelves. I remember books displayed on wire book stands on the tables jigging but staying upright almost every one. (The main store was not so lucky and the structural damage there revealed greater problems, necessitating the renovation that led to the store's expansion into the whole of that building, and, in a way, to the store's eventually recent demise, being too big to scale down when the economics of selling books offered the owners too few other choices.)

Now my shelves at home are all bolted to my walls, so unless our house comes down, the shelves are likely to stay put. But as the photo I include here shows, my shelves are not enough for the books I own. When the house is cleaned, the strays are congregated in a heap such as that shown. It is a sorry and undignified fate for so many good books, particularly as the pile on the floor usually represents my most recent reading, particularly for the purposes of writing this blog. But barring natural disaster, or a sudden urge to organize and divest -- an urge not unknown to me, but rare -- these good books will have to be content to be as they are. The room is warm and dry, at least, and the stacks not nearly so likely to collapse as they might look. And at least from the standpoint of our personal safety, I've learned not to build such unstable structures at the foot of the bed. The only black-eye I'm likely to get as a result of book collecting hereafter would be from my exasperated spouse. Luckily for me, he has a merry heart.
Posted by usedbuyer 2.0 at 12:05 PM