My husband's birthday approaches, and so a book or two, to begin celebrating. These would be "special orders" of course, as such books tend to be dirty and not carried in so proper and upright a venue as that in which I am presently, (permanently?) employed. I do love ordering in smut -- possibly shocking the good people in the receiving and tagging department, certainly raising a few carefully composed eyebrows on the sales floor when the books make their way down to the hold shelves. As I was in the mood for something naughty my own damn self, I ordered something in for me as well.

I've always loved comix, from Little Lulu to Batman, and I've collected gay comics for years, at least when they've been reprinted as books. When I worked at A Different Light Bookstore, in West Hollywood -- soon to be just a memory -- I suddenly had full and happy access to all kinds of inventive and amusing, often quite explicit comic books; the wonderfully sleazy Meatmen series, foreign imports, for a time, before the money grew slim, for the store and for me, wonderful zines, even Japanese gay manga I bought without being able to read (could understand most of the pictures easily enough.)

Reading gay comics, I came to appreciate the power of graphic story telling. I hesitated then to call it literature, and still do. It is an art form, if a minor one, but usually, as written, it does not approach literature, nor does it need to. I find the adoption of the word "novel," for instance, maddening. Most of what are fashionably called "graphic novels," at the level of language, do not rise above, and often rest well below, children's books. Some of the more celebrated writers in this genre would not, without the superior visuals, be writers as such at all. Most write captions with a bit of dialogue, and all of it so tiresomely derivative, hackneyed and politically, intellectually and morally crude as to shame a bathroom-wall. I can think of few categories in publishing today that have produced and promoted more self important bores, bullies, self-indulgent adolescents and lazy fascists than the "graphic novel."

So when something exceptional has come along, particularly from a Queer artist, I've been more pleasantly surprised than not. To my mind, gay graphic artists have, to date produced two books of such rare depth and style as to rise above, or rather raise up the standards of their class. Alison Bechdel has produced for years, in her strip "Dykes to Watch Out For," the most consistently satisfying visual and verbal humor of anyone working in a GLBTQ context. Her book, Fun Home: A Family Tragicomic, Houghton Mifflin, 2006, is not simply an illustrated memoir, or a comic strip. With a beautiful, simple line for character that manages to be both roundly familiar, genuinely funny, and even poignant, her characters have always been the best kind of cartoons. Likewise their surroundings and context have always been satisfying, both for their reality, and their observation of traditional, and in Bechdel's handling, witty, conventions; amusing titles on the spines of the books in the bookstore where many of her regulars have worked, clever jokes made with common objects, quick if telling details. Her writing style, when confined to a strip, managed to carry considerable weight for so slight an enterprise, by allowing not only for jokes and character, but extended story-lines, realistically complicated relationships, even the growth of her characters over something like real time. But in Fun Home,finally free from from the constraints of telling jokes at all, and from the limits imposed by standard length and a set "cast," Bechdel went further. Her drawings here are richer in detail, if still sweetly comic, her writing still straightforward, but more considered, even lyrical in places, and the overall effectiveness of her storytelling, visual and verbal, of a sophistication, and emotional force seldom approached in her previous work, or in the genre. 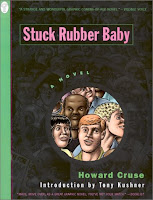 Howard Cruse, creator of the long running "Wendel" comic strip, wrote the only other GLBTQ graphic book, to date, of equal weight and accomplishment, Stuck Rubber Baby, Paradox, 1995. Like Bechdel, a decade later, Cruse created a complex and compelling story, again largely from his own experience of childhood and coming of age, that takes the words as seriously as the pictures, while still delighting in the fundamentally comic spirit traditionally associated with the form. Where Bechdel focuses in her book on her childhood and the conflicts within her family, and within her father, Cruse's story quickly moves out into a wider social and political world, eventually encompassing not only the Civil Rights Movement, but also Gay Liberation. It is a dizzying achievement.

The dirty book I ordered for myself is a humbler order of art than either of the two I've already mentioned. Side by Side: The Journal of a Small Town Boy, by Mioki, from Bruno Gmunder, 2008, is a rather sweet little love story, a predictable faerie story at heart, of two boys in love. The writing, such as it is, is little better than greeting cards, and the plot all but summarized in the title -- small town boys love, separate, and come gayly back together again in the Big City. The visual style will be familiar to anyone with an eye for anatomical and architectural rendering. But I really like this overpriced little book. In it's way, it is a radical departure from the tradition of gay skin comix, in so far as it remains throughout a gently romantic story, but told with an unusually realistic appreciation of the genuine fun to be had from sex. No one is made to suffer for having sex with more than one partner, or with more than one partner at a time, or even for money. There are no tragedies in this romance, no monsters in this faerie tale. That, of itself, suggests progress, without sacrificing the very real pleasure to be had from seeing beautiful, if rather dull and interchangeable boys doing beautifully exciting things with one another, their friends and strangers, in various and carefully, even lovingly delineated -- if impossibly sustained -- athletic positions. If this is rather soppy smut, it is well intentioned and handsomely produced smut, and just the thing for a bit of over-priced eye-candy.
Posted by usedbuyer 2.0 at 8:11 AM