The Better Part of Biography 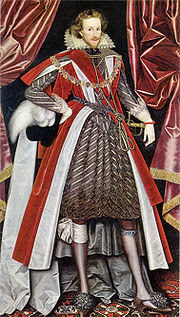 Reading Adam Nicolson's new book, Quarrel With the King: The Story of an English Family on the High Road to Civil War, I had the unexpected pleasure of discovering a wonderful portrait of a favorite. I'm partial to favorites, royal. James the 1st of England was, for the most part, about as bad a character as was ever produced by a very spotty family. It is hard to find much in him that wasn't reprehensible, but I can't help being tickled at the way the old boy had with the boys, and how many. James Stuart had favorites as few had before or after him; promotions, fortunes, titles and lands, pearls, gems, suites and kisses rained down on each lucky, comely lad in turn, including, as it turns out, an Earl or two from the clan storied in Nicolson's book. There is a rather fabulous portrait, included in the photo-insert, of Philip Herbert, made Earl of Montgomery not long after, as Nicolson says "the royal eyes alighted on him." Philip is described, rather charitably, as having been "less complex" than his more accomplished older brother William, the Earl of Pembroke, herein described in no uncertain terms as no less than Shakespeare's "Mr. W. H.," but the kid brother did okay for himself, and looking at the painting of this pretty peacock, one understands the king's interest. He looks good. His elaborate costume and elongated figure can't distract from his obvious charms. Old King Goat had good taste.

I've always enjoyed the stories of favorites and mistresses, secret marriages, bastards made dukes, boyfriends made noble. One of the few advantages of the monarchical system, at least until the advent of constitutions and nosy parliamentary inquiries, would seem to have been in the chance for beauties to work their way up on their backs, without undue embarrassment to, indeed to the great enrichment of their friends and families. I've always enjoyed the history of successful gold-diggers.

Today, too lazy to roll out of bed and do better, I watched again John Madden's 1997 movie, Mrs. Brown, starring Judi Dench and Billy Connolly, as the widowed Queen Victoria and her all too faithful "ghillie" John Brown. Dench was, as ever, a wonder. With her rather small eyes and pert face, she looks nothing like the famously bug-eyed and beaky Queen, and yet she manages to make the formidable, even forbidding little reactionary come very much, and very sympathetically alive on screen. One not only pities Dench's Victoria, one actually comes to like her, and fairly quickly too, as soon, in fact, as Billy Connolly's delightful Brown arrives to enliven things with a wink and a bit of smart insolence. He looks quite fine in and briefly out of his kilt too, offering further visual evidence of John Brown's attractiveness, which seemed so to flummox the rest of the rest of the Queen's faithful.

The movie is a surprisingly moving, and chaste telling of the rise and fall of The Widow's favorite, and I've watched it more than once since it's release, each time with no less pleasure than the first. It is that good. It also proves a theory about the strange power of that odd little person, Queen Victoria, namely that whatever one may find distasteful in either monarchy or her personality, everyone writing about her sooner or later seems to love her. Biographers and cabinet ministers, historians and playwrights, for whatever reason, it seems even her harshest critics, on greater acquaintance, come to find her strangely sympathetic, not just pitiable for her unfortunate and neglected childhood, or the untimely end of her obsessively happy marriage and her long and wearisome widowhood, but genuinely likeable.

Lytton Strachey, perhaps the greatest and most famously acid historian of the great Victorians, on coming to Victoria herself, wrote another masterpiece, as unlike in it's way to his Eminent Victorians as day is to night. He may well have set out, in his Queen Victoria, as he had in his earlier book, to put all that was, by Bloomsbury's lights, awful in that earlier age, and as personified in the queen, down, for good and all. But, like so many before and since him, and even as he undid some of the stays in her stout myth, Strachey, by the end of his researches, and in the book he finally wrote, found a woman he truly respected, however violently he disapproved of her politics and piety, her temper and her empire, a woman in fact he seems to have ultimately found himself writing of as he did almost no one else: as a good example, in her weird way, as something of a heroine, at least in her own long and often unhappy life.

Every time I find myself, as I did today, distracted by a movie or television show featuring Victoria Regina, I take down Strachey's book and dip in here or there. My edition is wonderfully illustrated, with a brief introduction by Strachey's own great biographer, Michael Holroyd, and I inevitably read the whole last chapter, "The End," and stare at the last photos of the fat, sad little Queen in her pony-cart. Strachey closes his biography with a beautifully sentimental speculation, allowing the dying old lady to drift back, and back through her happy moments, ending where she began, in innocence. It is one of the most stunningly unlikely, and kindest, tributes in modern biography.

Strachey is, of course a favorite of mine, in a very different sense from that I was discussing when I started, and so, thanks to him, is old V. R. herself. Else, why would I watch her and read about her again and again, when there is so much I would rather and ought to do? Inexplicably, I find I like her. Go figure.
Posted by usedbuyer 2.0 at 10:13 PM