"It is good to rub and polish one's brain against that of others." - from The Essays of Michel de Montaigne 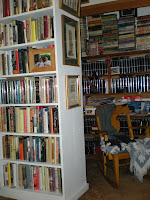 "When I am attacked by gloomy thoughts, nothing helps me so much as running to my books. They quickly absorb me and banish the clouds from my mind." - ibid

Where now are Michel de Montaigne's books? Where is his library? I've watched two videos online, touring his chateau and in neither was there so much as a Bible on his desk. His study is still a beautiful room; round and bright, the beams lined with favorite quotes. Much has be preserved or restored. The bed in his bedroom may be his bed for all I know. There is the sense, looking through the windows that we might see just what he saw. But where are his books?!

I imagine that those books that survived him he was anxious to preserve. Books in his day were more precious for being rare, and I can not imagine he would have left them in any other than a safe place, though I likewise can not imagine him parting with any of them before he died. I like to think his books still exist, that his Cicero sits somewhere, if under glass, still to be read, or at the very least seen. I could no more read his Latin and Greek than I can read his own French, I haven't his languages anymore than I have his library, his leisure or his wisdom. But still, I like to think that his library not only survived him but survives, if not intact then at least in individual volumes, acknowledged as having been once his and whole.

I expect no such conservation of my own collection. My books may go, en masse, after me, to anyone who will haul them out. When I am dead, my library as such dies with me. A. may want to keep this room as it is now, for awhile, but it will be more a burden, should he survive me, than a sanctuary to him. I would not want him here alone, in the room to which I so often retreat, even from him. Better he remembers me, if it comes to that, in our bed, the big bed we bought together and where we've slept together night upon night, the bed we've moulded to our own forms, his side and mine and the space in the middle where we've shared so much of our life together; taken our meals, watched our shows, told our secrets, exchanged dreams, affection, wind. (Montaigne would not approve of that last prudish euphemism, by the way.) Yes, better my lover remember me, or I him, in our bed than in our books, not every book in this house being mine, whatever the numerical imbalance. So when I die*, any friend may take from among my books any he or she may want. I tell you now, in the hope somebody will. Ask A., if he's here, and he will understand. Any he doesn't want, any left unclaimed, he can sell, I'll leave him little else.

But I've strayed from Montaigne's library here, and into my own, and apologize, to you, the reader, though not to Montaigne's shade as I feel sure he'd understand. Michel Eyquem de Montaigne, aristocrat, diplomat, traveller, advisor to Kings, Mayor of Bordeaux, born February 28, 1533, died September 13, 1592, owned a library of some 1,500 books, into which, at 38 he withdrew from public life. There, in his tower, he wrote his Essays, if not inventing then perfecting a form that answered better to his subject, himself, than any he might otherwise have mastered. In his Essays, one may meet him as one might meet a friend and know him better than most of us will ever know ourselves. In his Essays are his books as well, that other self, external to his mind but made to furnish it as handsomely as his books must once have filled his tower.

Quoting from my books is, or began at least, as something of an affectation, a way, like smoking cigarettes in a holder, of assuming a sophistication I desperately hoped one day to have. I don't know but what the habit, to some small extent, fulfilled the hope. I am smarter for remembering, when I do, what I have read. "I quote others only in order the better to express myself." said Montaigne. I should like to think I do the same, or at least intend as much. But reading the Essays, I am gobsmacked by the breadth and resonance of the author's quotation, by the subtlety of use, by his delight, sometimes unbridled in all he read, in anecdote and history, in poetry, philosophy, in nature, in himself.

If, as Montaigne wrote, the most certain sign of wisdom is cheerfulness, then Montaigne is the wisest of writers. I turn to his Essays, from among all my books, not only for example, or for the pleasure of his erudition, but for his company. If he is occasionally long-winded, or he tells more stories than required to make his point, if he assumes too much of his reader's education, and more of his reader's good sense, if he can not resist a joke, or a quote, or keep his thumb from pulling down yet another book, how does that make him anything but the best possible friend on a cold night like this, here, in my own little library, the shadow of his?

And so, yet again, he answers my question for me. Montaigne's library survives, if not intact, then at its best, in Montaigne Essays, just as he does. Where are his books? Here.