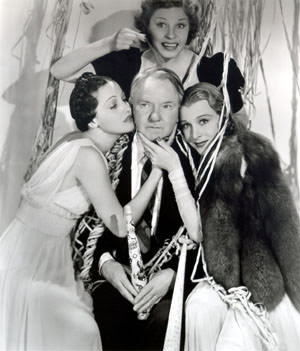 From To Wit: Skin and Bones of Comedy, by Penelope Gilliatt

"There is a myth that women don't really like W. C. Fields, the most prejudiced, unruly and sloshed comedian in cinema history. It arises, I suppose, because he loathed brats and felt genial to mayhem; and the male sex, which chiefly invents myths, along with slang, war, symphonic music and obscenities, obviously has an interest in assuming that women love children come what may, and that they will always elect to make life work. Once start admitting that women frequently cherish quite urgent desires to thwack infants on the head, and that they may have the same fellow feeling as any other human being for W. C. Fields' dogged anarchy, and I suppose that civilization as we know it would come to an end."