No Furniture So Charming 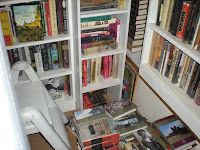 Own enough of anything, and the one thing wanted won't be where it ought to be when it's wanted. I've mentioned here before the disorder in my library. Witness. I have managed somehow to put my Shakespeare away in such a way as to make getting at him if not impossible, shall we say, complicated?
I've recorded the PBS broadcast of Sir Ian McKellen'sKing Lear and planned to watch it, text in hand. Wanting particularly to have the text ready when Lear begins his "blow, winds, and crack your cheeks! Rage! Blow!" I was determined to have my own King Lear from the complete set of The Guild Shakespeare.I've seen, maybe, five Lears and even the best of these tends to get lost in the storm. Good to have the score, as it were, for such an aria. And there are other bits, Edgar's two-faced speeches, dialogue with Gloucester, with Edmund, the thread of which I tend to lose without a text to hand. Now the Guild set is far and
away the best Shakespeare I own for such purposes; stout little volumes of the individual plays, at five by seven, small enough to carry around, even to a theater, but printed in a big enough type to be read in even dim light. Good notes too. 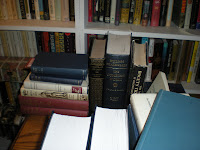 On my desk, with other books kept for quick reference, I keep a handsome, one-volume, Oxford of The Complete Works. It's the best edition in one volume I've ever owned; heavy but not impossible, well made, printed in two columns, but not impossible in a good light. But to sit with the thing in my lap and watch television? It would be like relaxing with five pound sack of flour on one's knee.

No. It's the Guild, or it's nothing. So, where is the damned thing? I don't have a proper shelf for the set, so they're kept in as neat and straight a stack as possible in the dark corner. There was an order to the stacking when it was done, but that happened quite some time ago. And since then... Most recently, reading Chaucer's Troilus & Criseyde, I found I was curious to have a go at Shakespeare's Troilus & Cressida. Simple enough sort of whim for an idle, rather than an ideal reader of such things. You may guess where
that neglected product of Shakespeare's pen lived in the stack. Now, digging for Lear, I had to displace the lot, piling them out onto the crowded floor, only to find the one play not present... 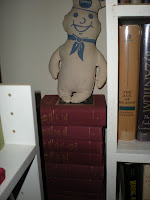 I'd forgot getting a similar urge to read the play, some months back, when the Peter Brooks/Paul Scofield version ran on Turner Classic Movies.

The question tonight then remains, where the hell did I put the damned book when I was done with it the last time? I know this is of no particular moment to anyone but me, and some clever dick is likely to point out that one does work in a bookstore still, with multiple editions of the play to be borrowed or bought inexpensively, yes? Well, I don't want those books, or the book on my desk, I want the other one. I planned the evening with the other one in mind. True, at this point I'll have to wait until Saturday night to watch the play anyway, (and yes, that will constitute for me an exciting Saturday,) but none of that matters. I want the book I want. Excuse me if I can't think of anything else for the next few minutes, hours or days, depending on just how long it takes me to tear the joint apart until I find it. Ah, books do furnish a room, don't they? (Stop looking at me that way, Ian.)