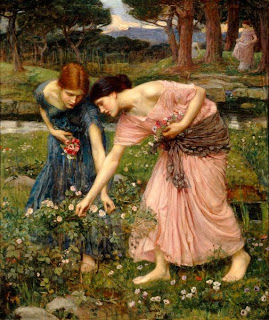 Like most, most of my assumptions about just what constitutes a canonical work of English literature have been based, not so much on what I've read, but what I haven't. There seems no way, short of perpetual, leisured study, to ever read all that might matter, or even, according to the best available authorities, all that ought. I've known and worked with and befriended enough true scholars to know that higher education, even at its best, can do but so much. The opportunities to survey open ground, end, or are expected to, in what I assume is still called a "concentration," which, in the course of things, then settles into some specialty, which in turn, if one is clever and academically successful enough, then narrows to a tillable patch, fertile enough to sustain, and if one is very lucky, even nourish, in some rare cases, even produce salable goods. But what's required for such husbandry, beyond the tools provided, and an instinct for the arable, is a predisposition to the work I never had. I can not think or work that hard, or sweat so much, just to root a cutting or see a graft bear fruit. I haven't the patience required. Perhaps I haven't the smarts either. Entirely possible, even likely, I am just too lazy. I'll be honest, I'd rather wander. There may well still be a place there for the wanderer as well, in a kind of hired work, but I don't know any now employed in these fields who do not bitch about both the resulting neglect of their private holdings, of the duties and distractions they owe their landlords, and of the remembered pleasure of a doze with a useless book under a tree.

As I'd rather just work, as it were, in the market stalls, I've no one to blame but myself for all I've yet to see by just selling, and sampling. To one of my indolent disposition, until it is on offer where I work, and by that means, all but dropped in my lap, there's little chance I'll ever pick up what others, presumably, already know the value of. Mine is a tradesman's eye for quality.

Like anyone in trade, I've learned a little of the look of a good book. Curiosity and predisposition, as well as pride, have led me to study something of the origins of what I sell, to recognize a like virtue between two books, to know not only what I might sell, but what would be a pleasure to move. What I put out to tempt the passing buyer, I need not always taste to know the nature of, but I do try as much as may be stomached, even of the cheap stuff. And so I know my lines; the perennials and seasonal goods, the quick to wilt, the curiosities and hybrids, the rich and the thin, and so I've come to recognize both what might be the best of what's on offer, and what is likely to sell. I'm not ashamed to recommend anything, for what it is.

But my preference is naturally for the better stuff, not just the high-end, but the best, and ripest in the shop. And for that, one does not so much need money -- though more of that, as always, would help, -- but expertise, and as mine is of a sorry, grubbing sort, I've come to trust certain brands, specific producers, for their imprint. Pure snobbish faith, I know, but there it is. One does with what one has, and I have, where classic English poetry is concerned, the Oxford Book of English Verse, and the Oxford Standard Authors.

Dear Helene Hanff, in her book, Q's Legacy, detailed how the great anthologist became her teacher, if only through his books. From Arthur Quiller-Couch, Hanff, unable to afford a higher education, learned how and what to read. Both she and he have been among my own most beloved teachers. I trust them, and from them I have come to trust Oxford University Press, at least as it used to be, to help me to the books and poets I ought to know.

After all, that is what the canon is, or was, the invention, and a pretty recent one at that, of Dons. Who better then, to teach the likes of me?

And so I've just bought and added good, used copies to my library, of Richard Lovelace, and Robert Herrick, and even Sir Thomas Malory, though nothing ever bored me more than noble knights in pursuit of virtue. Of Lovelace I know only what everyone does:

"Stone walls do not a prison make,
Nor iron bars a cage;
Minds innocent and quiet take
That for an hermitage."

Of Herrick, perhaps I know a dozen lines, beyond, “Gather ye rosebuds while ye may, old Time is still a-flying. And this same flower that smiles today, tomorrow will be dying,” and those only because of repeated quotation and, again, anthologies.

But when such rarities as these happen across the desk, in good dustjackets, unspoiled by pencil or pen, I indeed must gather them while I may. Time is indeed "a-flying," and there is still so much I've yet to read, even just among what falls in my lap.
Posted by usedbuyer 2.0 at 10:13 PM