And Then There's... Bill Macy 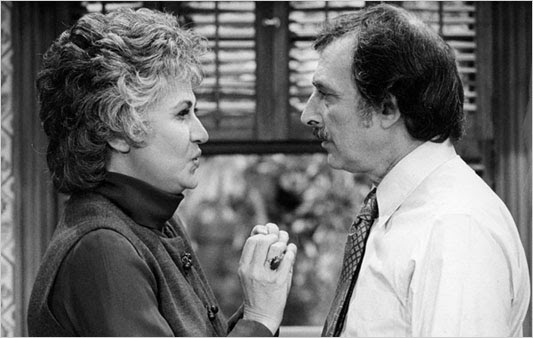 One of the more enjoyable aspects of renting entertainment via the mails has been having little or no idea what, in the way of movies and television shows, will be in the mailbox. I've been very lax in reviewing our rental lists online. Dear A. signed us up for Netflix, after I refused all further business to Hollywood Video, whose rental policy recently went from being exceptionally good to impossibly bad. The afternoon we canceled our membership with the rental place, we spent quite a long time together at A.'s desk, making lists, reviewing these, and looking at every GLBTQ listing on the Netflix website. It was fun. Haven't really thought much about it since. Movies come in the mail, we watch some of them together, others, A. watches on his own. If anything, A. rather loves movies even more than I do. He has the added advantage of age and so, not quite remembering that he's already seen a particular film, he often watches things again, for the first time, as it were. He also has an affection, that I don't entirely share, for television shows long off the air and only now appearing on DVD. Many's the weekend morning, while I'm still abed, snoring away, or reading, or some combination thereof, that he has already come down to his desk, where he sits, contentedly watching what used to be called reruns, on his big, new computer screen, either on DVDs or online. He's specially fond of westerns, more often than not, because he still finds the sight of a youthful Clint Eastwood in tight blue jeans, and the like, awfully exciting, even in black and white. He watches old episodes of the Alfred Hitchcock show, "The Outer Limits," and who knows what all.

A.'s affection for old television is usually something I leave him to explore on his own. Coming home rather late from my book club the other night, and finding him dozing, as always, with the television on, I happened to notice a familiar theme song. I got no further than taking off my shoes before I found myself sitting in the chair, laughing merrily along with the "live studio audience." I'd assumed the television was tuned to one of his nostalgic broadcasts, but actually, he had rented the whole first season of Norman Lear's "Maude." No idea just how many episodes he'd already watched before he'd drifted off. Eventually he woke up, to the sound of me laughing out loud, and then we watched, I don't really know how many more episodes, until the end of one of the three DVDs. It was great fun.

I should, just here, review all the innovations and culturally significant moments from Lear's sitcoms. I grew up with these shows, benefited from the changes in society that they not only reflected, but to which they contributed. Among others the other night, we watched the two-part episode, "Maude's Dilemma," in which, at 47, she decides to have an abortion, which had, in 1972, only just become legal in the state of New York. It was remarkable, seeing that again, and seeing the unapologetic way in which the subject was treated as a decision ultimately to be taken without the interference of mobs, fanatics and without even once mentioning Bronze Age theology.

Whatever the decline in both liberalism and the sitcom in my lifetime, I really don't want to use this space to revisit the controversies of thirty seven years ago. Should be fairly obvious from my comments above what I think of the progress we have and have not made since. Instead, I just wanted to pay brief tribute here to the late Bea Arthur, and to Bill Macy, her costar. Arthur starred on two of the best American sitcoms, the other being "The Golden Girls," and with her recent death has come much belated recognition of her truly amazing talent. No one in the whole history of television had a better "take" than Bea Arthur. However funny she could make the best joke or even the least inspired line, it was her magical gift for the perfect pause that made her so dazzling. Watching "Maude" again for the first time in years, if not decades, I was struck by how unlike her two most famous television characters were: Maude Findlay all furious, pompous liberality and surprisingly fragile self assertion, very much a woman of her time, but bigger than either her surroundings or her role, and then, on "The Golden Girls," Dorothy Zbornak, the butt of endless wallflower jokes, a divorced substitute teacher dependent on an unstable income to see to herself and her elderly mother, sarcastically self defensive, but easily deflated. What both characters had in common, of course, was the actress who played them so distinctly, and so well, between the spoken words, who understood not only all the possibilities of the unexpected inflections of a sharp line and a dropped octave, of speed and tempo, and the full physicalities of comic reaction; often throwing her whole, tall, rather surprisingly graceful form into motion, arms flailing, back bent as if by the resulting resistance of wind as she sailed across a room, but, more rare in a comic performer even of her caliber, Bea Arthur knew exactly when to stop. Watching her in either show, it is actually her economy of reaction that is so satisfying. Having established the volatility and power of both her amazing voice, -- surprisingly, hilariously shrill in "Maude," then more consistently contralto, if no less capable of trumpeting outrage or pain in "The Golden Girls," -- and her commanding physical presence as the biggest dame in the room, the great fun in watching Bea Arthur is in the control with which she reserved this explosive power. Not a clown or a comic, but an actress is what she so superbly shows herself to be in such moments. She does not play the jokes, she plays the scenes, and rather than milking the laughs she seems so easily to get, she builds them, in character, by letting every emotion play out as written, allowing the audience time -- her absolute slave -- to work each thought out through her reactions as much or more than the words, she makes every moment funnier by making nearly every beat honest, plausible, true. She's funniest when she is most recognizably vulnerable, most human, her face rigid with disdain or dismay, her body arching with tension or bluntly incapable of any effort but staying upright. When Bea Arthur lets loose, she is a comedic hurricane; all whirling, destructive confusion and belligerent indifference to dignity, but when she is still, she is so intensely so as to be a perfect study in shock, resistance, resentment and defeat, even emptiness. Those long takes: the hooded looks and slow turns, the tight mouth, all express a weary resignation which, unlike the power let loose the moment before, a power one might only wish one had, is instantly recognizable, almost embarrassingly familiar. One knows, just then, exactly how she feels.

I could not write about watching "Maude" again after all these years, without a word, in closing, about Bill Macy. In a role that was doubtlessly written as just a foil; the fourth husband, a little man married to a big woman, a suburban nebbish, a little randy, but far from equal to the task at hand, Macy made of Walter an equal to Bea Arthur's Maude. How? I can't help but think, watching them play together, that Macy, being an established character actor himself, rather refused to be intimidated by the star. I know nothing of the personal relationship between the two actors, if they were friends or not, but within the context of the show, their affection seems absolutely genuine, and that would seem to have been something the actor played no matter how the scene was written, choosing to play not just the husband, but the lover. It is a brilliant choice. No matter how broadly their scenes together are written, no matter how much yelling and fighting and storming off, Macy uses every every opportunity to reinforce his equality in the partnership by beaming at Bea Arthur. It is irresistible, for her and for the viewer. Even when he is most ridiculous, even when she is most impossible, Bill Macy refuses to concede romantic defeat. It is equal parts Rock Hudson and Groucho Marx, this comic male egotism. His Walter may not be the world's greatest lover, but Walter doesn't know that, or if he does, he's convinced, with Maude, to never be less than the leading man. This choice makes even the scenes of Walter's ridiculous and, already in 1972, anachronistic assertions of male privilege not just funny, but touching; the man wants to be "the man" because he wants this woman to want him. It is a fascinating and unlikely expansion of what could have been an embarrassingly dated cliche, the adjunct husband, into a star turn. Macy earns every laugh, even the ones he had no right to expect, even the ones he picks up from where Bea Arthur left them, and he does it with a twinkling wit that can't have come from the page. His is as much a masterful performance as hers, and in a less obviously funny part! It is reminiscent of the old saw about Ginger Rogers and Astaire; Bill Macy did everything Bea Arthur did, only backwards, and in Florsheims. Again, this is a lesson in acting that any of the subsequent generations of hen-pecked sitcom husbands ought to have studied more closely and for which they should be grateful.

Bill Macy, whenever confronted by the full force of both Bea Arthur's outrageousness and her reserve, matches her, point for point, in volume and kinetic recklessness, and in deadpan. Their scenes together are unmatched, in my experience as an observer, in the kind of sustained, delightfully extended interplay, of play, between two true professionals, two truly exceptional actors, neither willing to be the first to blink or break. It is a contest of equals. When their respective characters make the inevitable and necessary concessions to the format; making up after a fight, admitting at last a weakness in argument or failure, it is never a forgone conclusion that he will fold, and that makes Bill Macy one of the best, most inventive, and least appreciated comic actors in the genre. One of the delights of "The Golden Girls" was watching such superb actresses playing off one another, clearly enjoying the fun of working with such knowing partners. I'd forgotten just how lucky Bea Arthur had been, in having had just such an experience before with the great Bill Macy. No wonder she knew exactly when to stand still. She might have been lost in admiration. I was. She must have understood how good her costars were. I can see it now, myself. Lucky woman. Lucky us.
Posted by usedbuyer 2.0 at 10:22 AM