A Box Without Hinges, Key, or Lid 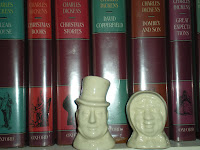 I've mentioned before, my father's retirement career, reselling collectibles, junk and the like in a kind of perpetual yard-sale, is not so much a hobby as a sadly necessary feature of my parents' Golden Years. It pays for my parents' prescriptions when their paltry insurance fails them and their coverage, under the Republican prescription plan, leaves them to fend for themselves for weeks or months at a time. ("Compassionate conservatism" and pure market capitalism in practice, that. Lest we forget, lest we forget.) As neither of my parents is eager to die just yet, they have had to improvise a supplementary income from auctions, estate sales and the like. Dad's good at selling things, and at finding things to sell among the stuff other people discard. This is not something that will ever do much more for him than pay for some of his blood-pressure medication, but at least it can do that.

A trip home for me now would not then be complete without an hour or so spent poking among the bits of chipped crockery and repaired furniture, looking for small treasures to take away as keepsakes of my visit. This isn't as ghoulish as it might sound. I'm not grabbing up family heirlooms or stuffing my luggage with swag. A review of my father's "finds" has become an established ritual when a guest stays over. And to admire anything in my parents' possession is to risk being given it on the spot. It's just their way, and may explain, in part, my father's failure to become a millionaire. Therefore, one has to be cautious about complementing my father's choice of tie, or admiring my mother's collection of ice-box storage containers, unless one wants to see these things in a Christmas box, or find them carefully wrapped in reused tissue papers, and secreted in one's suitcase, under the socks, with a loving note attached. I've learned to scope out some small thing, suitable for carrying through the airport. Having studied the the thing carefully, and having speculated on its relative value, after noting the actual price tag my father has put on it, and having expressed a delighted surprise in finding just such a long-desired item in, of all places, a box in my father's garage, the object is then put back where it was found. Returning to admire it again, just before leaving, clinches the deal. The transaction invariably concludes like this:

In this way, I've been able to leave after a week's visit, without a collection of men's sports coats in various, unsuitably bright colors and patterns, complete sets of china service for twelve, and or a selection of antique kitchen tools, including a twenty pound, cast-iron meat-grinder, standing three foot high, still in its original box, unused. As you might imagine, I have made a few mistakes over the years, and ended up hauling all sorts of good stuff I didn't really need, three thousand miles across the country. These days, I have the sense to confine my comments to portable goods, preferably small enough to fit in a rolled sock. Live and learn. Material expressions of affection are best when they don't require additional fees or postage.

This time, Wilkins Mcawber caught my eye. That's not a name my father would be likely to recognize. Neither's Sairey Gamp. I saw them both, together nestled amidst a whole host of salt & pepper shakers on a shelf in my father's shed. I recognized old friends. There's nothing to show that these little stoppered busts are officially sanctioned reproductions from the estate of the great man. There are no maker's marks or inscriptions. Nothing about them suggests anything but mass production and the unlicensed use of likeness. I knew them though, as soon as I saw them, for who they were. An unlikely pair, may I say, but I thought them handsome, and familiar enough, to think they might look well on a bookcase in my library. I told my father a bit of the history of either character, even made so bold as to comment that he might find he had no little in common with Mr. Mcawber, should he happen on him. My father took this all in without much curiosity. Having put them back and picked them up a second time, according to the established ritual, as expected, I heard my Dad behind me:

And so now Wilkins and Sairey now sit, each not quite before the appropriate volume, yet smiling benignly down on me as I write. Like most of the other small, decorative touches in my library, they represent more than just a bit of bright fancy on my bookshelves. There, for instance, is a miniature teapot, made from old English penny pieces, that I got in London on our only trip abroad to date. And there's the broken pipe I pretended to smoke in a high school play of The Hobbit. There, just above my desk, is the beautiful box that my dearest friend R. made for me one Christmas. On a shelf behind me sits a little brass Korean gentleman, smoking a long pipe. This is actually an incense burner that my father dug out of a foxhole in Korea, during his service in the "conflict." I asked for that. And now, just in front of Dickens, are two old friends, just recently had from the hand of my father as well. This room is full of such things, gifts, stuff. The value of most of it, no one, just looking at it, would ever guess.
Posted by usedbuyer 2.0 at 4:14 PM