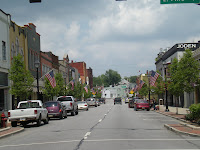 "In a small town, past and present stand side by side, almost too close to tell the difference." - Terry Teachout

They've painted Broad Street. When the first little mall opened on the edge of town, and a Kmart came in, there was a sense of progress and expansion, not unlike the excitement I remember in my childhood when my hometown got our first fast food restaurant, a Burger King, was it? Just up the street from the feed store, anyway, easy walking distance from the high school. I remember people lining up in their Sunday clothes for the grand opening, eating burgers in the parking lot, the ladies trying not to get ketchup on their gloves. (It was summer, but yes, ladies still wore gloves then. That's how long ago this was.) When, some years later, after I was long gone, "the Walmart" opened in town, and the the giant outlet mall opened just up the road from where my parents live, spreading out over acres of what had been disused farmland, wetlands, and scrub, the little main street that had constituted nearly my whole experience of "town" in childhood, ceased to be anything much but an anachronism. Such is the fate of small towns in America.

But, it seems, they have embraced their fate, back home. An anachronism, should it survive just long enough, can become quaint, it seems, even historic. All the storefronts in my hometown are, as I said, now freshly painted. Some of the accumulated "improvements" of my childhood have been taken off: false fronts, drop-ceilings, modern doors, and the original details restored. There are curbstones running the length of the street and affixed to three of the four sides of each are brass plaques, each commemorating some local connection to history: a planned but never built streetcar system, a soldier killed in the Civil War, the broom factory founded in the mid 19th Century, eventually inherited and operated by my grandmother's last beau. The whole town now looks much as it might have down in my grandmother's day, though with cross-walks, modern traffic lights, etc. The effort is admirable, at least in so far as making the place considerably prettier. Clearly, a great deal of hard work went into this renovation, a very real concern to retain something of small town charm and a lively diversity of working businesses has motivated a major effort. And if the fierce insistence on period authenticity -- though what period, or periods are meant to be invoked is a fair question -- has resulted in new layers of anachronisms: tattoo parlors in 19th Century storefronts, a bar in what was a dry town, etc., on the whole, the effect is heartwarming.

The place is much as I remember it, just not terribly real. Everywhere there is evidence of a much cleaner, more harmonious, more uniformly dainty sensibility than ever truly occupied this ground. Historically, it was a town of shopkeepers, true, but also of mine and mill workers, farmers, hired-hands, and ditch-diggers. True, there is still a Presbyterian college that has dominated the place for most of a century, and a pretty campus it still is. But the Klan was here in the twenties, if not before. Those good Presbyterians and the Methodists and the rest, once excluded Catholics wherever and whenever they could. Blacks were once all but unknown here, even down to the days of my own childhood, but now stops on the underground railway are commemorated as if the place had been Quaker. I understand the urge to prettify the place, but it is important too to remember just what a narrow, bigoted, Babbitty place this little corner of Pennsylvania once was, and, sadly, all too evidently still may be, behind the pretty painted doors.

Witness one of the houses my mother grew up in. Her parents were poor. It was the Great Depression. Her father rented an old wreck of a house; no plumbing, no heat but fireplaces and a wood-stove, the windows patched with blankets. They lived there because the rent was ten dollars a month. The house was not in town, but out the road, in the country. Town was too expensive then. When I was home, my parents & I went to dinner at a restaurant that sits just next door to the stone house my mother lived in through some very cold, uncharitable winters. Now this house is a registered historical location. It has been, since it was built in the 18th Century, a tavern and coach house, a stop on the old pike frequented by traders, soldiers, migrants west. It was a hotel. Later, it was a roadhouse, with all the usual dancing, drunks, violence and whores. And for a while, it was a rented home of last resort for a poor miner and his cold family.

It is only the quaint condition of the 18th Century tavern to which it has been restored, it is only the clean, respectable past that is memorialized in the gift shop full of faux colonial pieces, Amish quilts and Taiwanese brickabrack. Now maybe that's as it should be, and maybe it isn't, but that's how it is. The past is what we make of it, I suppose. I can't help looking at that old stone house, pretty as it now is, pretty as my hometown now is, without at least a thought for what's been painted over, restored away, intentionally forgotten. 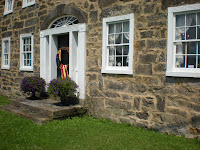