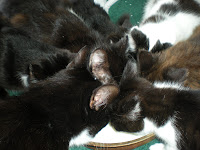 My father has a peculiar affection for strays. I grew up surrounded by animals that probably ought not have been where they were. Yes, we had horses and ponies, but usually too old, too blind, too unsuited to work any harder than carrying a girl around a hay-field on a summer afternoon, but, for all that, fed, and brushed and faithfully maintained. Likewise our dogs, the majority, anyway, were the kind of crossbred mutts made for nothing much but fun. Nearly all the animals with which I grew up, other than the chickens, three pigs and my father's hunting dogs, were strays. The elderly raccoon my father kept as a pet was actually rescued as a baby, and carried home in the pocket of his hunting coat. Cats wandered on and off the little property at will, expecting to be fed. Still do. 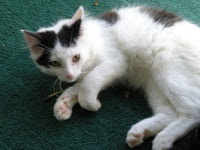 Animals that stayed on the place usually had some function. The chickens gave eggs, of course, and often as not, ended being our Sunday supper. The horses, however blind, took a saddle. The dogs, however old, were meant to hunt, or at least go for the kind of walk justified by the pretense of hunting. (There's but one such now, a very old, all but bark-less beagle named Baby. She can't be trusted to come home from chasing rabbits anymore, as she gets too easily lost, so her outings are now largely on a leash and confined to the yard. She is my father's last dog.) The cats were expected to hunt as well, albeit unsupervised. 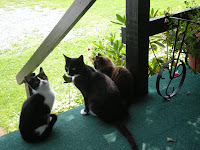 As an unfortunate consequence of an acrimonious separation, my brother has lost all contact with his step-daughters, and with them went the grandbabies on which he and my parents so doted. The loss has been sore. For my parents, the absence of children about the place has left them in an unnatural quiet. Both rather enjoy a bit of hubbub. Both have spent their whole lives caring for things, people, animals, plants. Their own grandsons live far away. Left largely now with just flowers, grass and trees, they can seem a little lost. 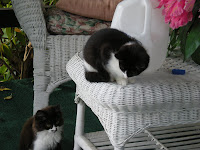 What my 78 year old mother still thinks of as "old ladies" are now all but extinct. The last of her really elderly friends up and died on her, a couple of years ago. The lady I'm thinking of, being then in her late nineties, had every right, of course, but still, it is a loss. My mother's still bereft. My father, the younger at 75, still has an elder friend or two he checks on periodically, like old Nick, who sits in his own yard, unable to do much else nowadays, and watches the world turn and eats soup from a can and misses his late wife Bea, an excellent cook with whom he fought for forty years or more. My father goes to sit with Nick now and again, to talk about Bea, and the dogs both hunters once had, and times gone by.

The biggest surprise of my trip home was in finding my mother's porch covered in cats. This would never have been allowed, in my time. One old cat kept a house on this porch when she became too old and infirm to live elsewhere, but generally all our animals have lived outside, in houses of their own my father built, or in the barn. Now I come home to find a virtual riot of cats and kittens, all of them largely feral, none willing to be petted, or captured, as cats used to be, to be taken to the vet's to be "fixed." My father explained that all these were direct descendants of a rather unpleasant, wild tom adopted, years ago by the boys up at the used car lot where my father sold some cars. That venerable ancestor's name was Bootsie, and the rough affection he inspired among the salesmen and mechanics there, and Bootsie's amusingly aggressive nature, inspired his title as "Bootsie, the Attack Cat." Seems he was, for the price of a warm shelter in the salesmen's trailer and regular meals, willing to learn tricks, not the least entertaining to his hosts, jumping, on command, one poor soul named Dean who worked about the place. Poor Dean was nearly always the butt of this particular routine. Told to "get 'im," Bootsie would find Dean wherever he happened to be and just smack the poor bastard around a little, before retiring, still the triumphant champion, to his usual corner. All these new cats on my mother's porch, or so my father claims, are progeny of the very late Bootsie. 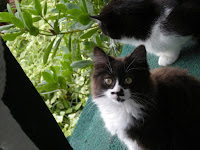 My father's intention, in filling an old tin pie-plate every morning with milk, and a dish by the barn with cat food every afternoon, when he takes dear old Baby her dinner, was originally to trap all these cats, have them "seen to," and then give them to one of the local Amish, for his barn. My parents certainly have no need of six or seven cats. But my father is not fast enough, his legs are not to be much trusted anymore, and catch them he can't. Still, he comes out each morning with his coffee and his wife and they sit and watch the cats and kittens eat. He tries, every day, to pet one or another of them. He's given them all names. (My favorite kitten being Groucho, who seems to be made up of the parts of no less than three separate cats, and who sports a cockeyed, greasepaint mustache.) My mother clucks disapprovingly at all the cats scrambling over her clean porch, but still she sits each morning with her coffee and my father, and they laugh, watching this one getting dunked in the milk by his greedy sister, and that one caught napping in the middle of my mother's flower basket, "ruining" the arrangement, though I wish I'd managed a snapshot of that, but the kittens always scrambled too fast at the sight of me.

I must say, I am glad of these latest, perhaps last strays. It was good, sitting on the porch, watching little things play, and eat and nap. It was good watching my father with such young devils, even if they won't quite let him love them. It was good.
Posted by usedbuyer 2.0 at 11:53 PM