Gypsy in My Soul

After my trip to the country, I admit, I was anxious to be back among books, new books and old, but that was not so high-minded an impulse as it may sound. Working in a bookstore affords me access not only to literature and scholarship and art, but to the entertaining, empty calories of junk. I will not here treat all the trash I've read in the past couple of weeks as if I was a reviewer -- no one pays me to write seriously about the books I read in an hour -- and neither will I waste this space recommending all the slipshod, wide-margined, celebrations of celebrity ego that passed guiltily through my hands in recent days, when I might have been reading Murdoch for Book Club. The kind of books I'm on about just now do not require or deserve any promotion in addition to the moneys already spent by their publishers on ads, television appearances, and the rest. Obviously, I found and read these things just wandering the Biography and True Crime aisles in the bookstore. I read them because I knew the names, admired the actors, remembered a headline, or was titillated by the subject. I read this kind of thing just as I read the magazines each week; not because I want or expect anything much from them, but because it is just good, mindless fun. If the reader is a fan of a particular actress, or wants the cozy chill of a senseless murder or two, such may be found without any assistance from me -- unless as a customer in the bookstore, where I will be obliged, and as happy to pass along the ephemeral as I am to sell the rest.

The phrase, "guilty pleasures," comes here to mind, but what makes a pleasurable reading experience a sin -- for such is the origin of guilt -- is not to my mind sex, celebrity, or voyeuristic violence, but bad writing. Knowing a book to be bad, and reading it anyway, is and ought to be embarrassing. I am then disinclined to list the bad books I read, one after another, in just these few days. Better they should slip unrecorded, as they have already from my memory. Why should anyone have to have my thoughts on these things? Enough to admit I read a bunch, just as I watch "Big Brother," and "Wipe-Out," without suggesting that anyone else need go and do likewise.

I ask only that we all admit our own low amusements, that I might blush less at mine.

That said, there was a little book in the pile of quick pleasures that made more than a passing impression, because, as a musical theater queen, third class, I can recommend it to my fellows without shame. Such fun! (The classification system for musical theater queens, for any who might be wondering, is actually pretty simple. If one actually makes professional musical theater; singin', dancin', performing, producing, promoting, even if only on a cruise ship, or even if just washing out the jocks of bus-and-truck, road-company gypsies, that makes the maker a first class queen. If one could restock the Library of Congress with recordings from one's own collection of original cast recordings, or if you bought Ethel Merman's wig at a charity auction, and, horrified of the idea of anyone else's head ever sporting it again, thus potentially diluting the juju and or muddling the Merman DNA, instead keeping the ratty old red relic, tastefully lit, under glass, in your Merman Shrine, etc., that earns a 2nd class stripe. If you know all the words to "Gypsy," say, and have watched every version of "Rose's Turn" on Youtube, even the amateurs, and always cry a little, then we're sisters in musical theater steerage. Anyone other, and you're really just a fellow traveler, darling; welcome to come along to a revival or to the piano bar after, but not quite of the party. See? Simple.) What made this slim coda to his already published memoirs such fun, is that the writer, besides being a very good writer, and director, etc., is something of a sonofabitch. Not just any sonofabitch, either, but one of the great sonsofbitches in musical theater, or theatre, as he seems to prefer, history.

Arthur Laurents is old. With age has come not only wisdom, but further justification, beyond achievement and talent, for just not giving a shit about anything much but his art, the work, as theatre types call it, and the memory of his beloved partner of more than fifty years. (I was reminded of Thomas Carlyle's sanctification, after death, of old Jane. Don't know that Arthur was so difficult to love and live with, but it can't have been all quiet afternoons in the garden, either.) Old friends, famous actresses, composers, producers, none need now be spared a kind word unless, in the author's settled opinion, they've earned it. Besides the usual villains in theatrical memoirs, like David Merrick and Jerome Robbins, both here given their due as having been touched with genius, if also having been first class shits, the pair of 'em, there are lots of talented people in the author's life who, it seems, he doesn't nowadays feel the slightest hesitation in rating, professionally and personally, and many, many are found wanting either artistically or as people, or both. In one's nineties, it would appear, there simply isn't time for bullshit. Understandable. What then makes for such breathtaking fun in both his memoirs, Original Story by Arthur Laurents: a Memoir of Broadway and Hollywood, and now in the more modest, if that's the word, sequel, Mainly on Directing: Gypsy, West Side Story and Other Musicals, is Laurents' genuine insight into what does and does not contribute to a successful musical, and his attitude to life. That seems just the right word for it, as attitude is as much a part of Laurents' considerable charm, on the page, as his talent. His premise in this latest book, that musical theatre is something bred in the bones, something that can be neither taught nor learned, that this is something that, as the lyrics in his greatest show once put it, though actually in the words of Stephen Sondheim, "You either got it, or you've had it," would not really be a defensible position, in a book at least in part meant to be instructive, were this position occupied by any other than so enduring a master of the form as Arthur Laurents. If anyone has earned the right to be both right, and ruthlessly, unreservedly confident that he and often he alone is right, both brilliantly analytical, and frankly cranky, even a little crass, it's this guy. He isn't, necessarily, very nice, and he may not have much to contribute to the deeper meditations of art, but he knows what he's talking about, and he would seem to know more about what does and does not work in making a musical than almost any living soul. He certainly seems to think so. Who am I to disagree? I believed every word. In truth, he's a little scary, but in a very good way; he's dead serious about how to rehearse strippers, for instance, and that is just a blast to read, if you're into musical comedy strippers -- pardon me, musical theatre strippers, with back-stories, and good motivations, yet. 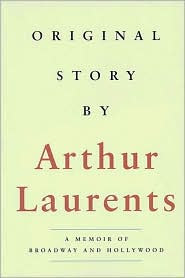 It is his very seriousness that makes him endearing. Arthur Laurents is an artist, and at ninety-whatever, he doesn't have a damned thing to prove. Doubt that? Check the man's credits. Unbelievably good stuff. If his theatrical vocabulary can't quite accommodate Samuel Beckett, so what? The man understands how to get the best out of Patti Lupone. That, my friends, is a rare gift. What's more, he can describe the process in such thrilling detail as to make yet another revival of "Gypsy" sound every bit as important as he seems to think it ought to be. I'm convinced. Working with him must be terribly exciting and rewarding, if, again, a little terrifying. Reading him less so, but only just.

That Arthur Laurents exists is, for a fan, a wonderful thing. That he's written another book, likewise. Bless 'im. Now I have to go get the bilingual cast album of "West Side Story." (It's important, trust me.)
Posted by usedbuyer 2.0 at 4:41 PM