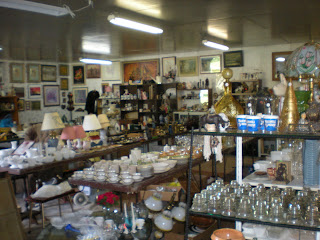 I'm thinking about things tonight. A writer-friend taught a seminar the other day on objects in literature and the uses to which writers put such things: Ahab's leg, for example, or the fishing-line from The Old Man and the Sea. These were two he mentioned, but many others come quickly enough to mind: the candlesticks the good Bishop gives to Jean Valjean, the Wooden Midshipman, "on the look-out" in Dombey & Son, The Moonstone...

The significance of objects has all to do with possession, I suppose, and attribution, which is rather the point, I should think, of my friend's seminar. But working at the Used Books Buying Desk, I regularly see the insignificant object, those things which people have lost, or to which they have lost their attachment, not just books mind you, but other, smaller, sometimes more personal things, letters for instance, but also the less obviously personal things, like a cigarette lighter, or keys to unknown doors, small things like that, things that have been forgotten, or abandoned, or left behind; the inanimate yet strangely intimate detritus of life. It is amazing how many stray things, not books, end up in the bags of books people bring: postcards, photographs, diaries, hair-ribbons, toys, even money. These I return to the person that brought them. Usually, I simply drop such stuff back into the bags with the books we did not want. The money, obviously, I give back. The photographs, the more obviously individual items, I also always draw to the seller's attention. Usually this sort of thing is met with some mild exclamation of surprise, with genuine pleasure at the unexpected recovery, but I am not infrequently amazed at how little these things seem to mean. I can't tell you how often a postcard, signed "with love" or what is obviously a family photograph have been dropped back into a box with hardly a glance.

When people sell their books, the books that have meant something to them, or to someone they have loved, often as not it is because of some major change in circumstance: the completion of a degree, a divorce, children leaving home, moving house, or illness, or death, has necessitated some simplification, the elimination of these books at least, perhaps as a first or a last step in a process of letting something, or someone, go. Such moments can be exhilarating, or painful, sometimes both in almost equal measure. One tries to be sensitive to the possibility that not everything lost will make the owner happy in having been found, but that is the assumption best made in the circumstances. 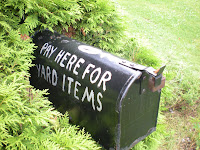 My father,forced to stop working in the mill by a bad heart -- ironic in a man with so good a heart, but let that pass just now -- and at loose ends with how best to supplement his insulting pensions from the job and the government, has made a kind of living since from auction houses and estate sales, selling on in yard-sales and the like some of the things other people found they no longer had any need of; imperfect furniture, dinnerware, trinkets, toys, junk. These stray objects eventually came to fill up a whole building. The first camper we had, my father rebuilt from scrap. Likewise our garage. He has hands trained in the Great Depression to "make do," and a working man's distrust of waste. Some of the first books I owned, he rescued for me from a dump. He offered these shyly, unsure of their value. (Whatever they were, I wish I had them still.) I drew before I talked, and I drew constantly as a child. White paper was a treasure. I drew, not always, you understand, but quite happily, on the white cardboards people threw away, when they unfolded their laundered shirts from the dry-cleaners where, I think, my grandmother sometime worked. This is then an inevitability, in a way, that my father should buy and sell the things that have drifted out of their first or second usefulness. The value of what he sells, he seldom knows, and most of what he sells, he sells for a small enough profit, and most of it to people who can not afford better than what they can buy from my dad. True, there are people, come up from the city, who spot the things of greater value: the antiques and clay jugs, the good china service, or the genuine silver amidst the plate. I don't think my father begrudges anyone the profit they find in his shed. As he makes no more from these things than he understands of their worth, he doesn't doubt there are those who might know better and deserve what their better educations and or instincts distinguish.

There is an obvious irony here, that even as I fled as soon as was possible from the home-place, and yes, from my father, and into a new and very different life, I ended being like him not only in the luck of finding love that has lasted, but a job dependent for success on the willingness of strangers to part with things I then sell on. I buy and sell only books, but what I do is just what he does. To an extent I might never have imagined, though I might have known it sooner, I am very like the man who raised me.

Like my father, I feel a genuine and strange tenderness for all the objects that pass through my hands as a dealer in the used. Even the most dog-eared and unlovely book goes back in the box it came from with some measure of regret, some filament of curiosity left behind for it having passed through my hands, however briefly.

Who read this book? Who needed this information, or was comforted by these memories or moved or amused by this story?

My friend, in teaching his class, quite rightly was focused exclusively on those objects the meaning of which is forever fixed by having been put into narrative by an author, but my job, and my recent trip home, remind me that every object made, every object owned and handled, used, possibly even loved or fought over, saved for, replaced, left unknowingly the last time a familiar hand put it back on a shelf or into a cupboard, every object, in short, that is of us, carries something of us on, if only into silence, if only into dust. This does not make our things any more valuable of themselves, perhaps, but it does make those of us who can see the use of them still, who see in the second-hand as much or more value than in the new, more optimistic than not that the past is present, and that utility, and beauty, do not always end when we do.

I will try to remember that. It is a good thing to know, one more thing I brought back with me, one more gift from my father.
Posted by usedbuyer 2.0 at 11:24 PM