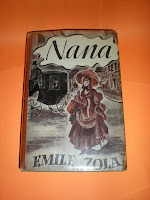 Modern Library made a mistake, back in the 70s, when it was decided that what was needed to really sell the series was a major make-over. The format got bigger. The jacket design went to grocery bag brown without decoration, and the bindings just went all to hell. An old Modern Library edition will, in all likelihood, outlast a new hardcover published this year. The dustjackets don't tend to survive, which is a pity, because they were often quite handsomely illustrated. Finding an old Modern Library, with it's dustjacket intact, is still a pleasure. Finding a box full, now that it cause for genuine celebration.

I started collecting Modern Library editions in the eighties, when the publisher rather came to their senses, and started reprinting the books with better production values again, this time in a uniform gray-green, but with the author's likeness at the top of the spine, and usually the same covering the front jacket. And the binding got better. I still think the books were better in their original, smaller format, 7 by 4 1/2, with Modern Library Giants, some of the clumsiest classic volumes ever produced, at 8 by 5, and usually inches thick. Still, even the Giants had their charms. One of my first editions of Charles Lamb was just such a bulky one. Still have that.

Nowadays, I've noticed that the publisher is reprinting some of their titles in reproductions of their original jackets, if in bindings not quite so sturdy. Additionally, as new titles and translations are added, these all seem to be coming out in bright, colorful new designs, clearly meant to evoke the glorious past, and that go a long way toward correcting the memory of the muddy seventies and eighties.

I do like a uniform edition on a shelf, but it doesn't sell books by disparate authors quite the way it once did, not without a less loose theme than that which covers the, shall we say, eclectic? range of the Modern Library. The Library of America, the unofficial canon of American letters, in either their collector's editions in slipcases, or with the uniform black dustjackets I like and collect, are printed in a ranger of cloth covers; blue, buff, green and wine, on good acid free paper, and stitched. They are the model of how best now to do this sort of thing.

My affection for the older Modern Library books has grown. It's true, they have reprinted lots of forgettable books, but they did a pretty good job overall of predicting what would survive. To hold an original, Modern Library of Zola's Nana, with the handsome jacket still on it, is to be seduced, which seems the right word, into thinking one really ought to give Zola another try.

Everyman's Library has likewise begun to undue some of the damage they did themselves when they decided to first, put all their books out with just a clear plastic cover and a kind of title card on the front cover, and then with no dustjacket at all. This only looks good so long as the books themselves have never been touched. Sooner rather than later, the gilded lettering on the spines wore away, and the whole series looks shabby before anyone had read a single book. Stupid, stupid design economy resulting in unsalable, unattractive stock. The buyer had to already know not only the title and author, but why to read it. Everyman's Library provided few clues. Now they begun adding good titles with thoughtful, uniform jackets, not unlike, but brighter than the middle Modern Library books I collect. Sadly, some of the Everyman's feature movie tie-in covers that look dated within a year of the movie or television broadcast, but even these, it is to be hoped, will eventually be replaced.

I'm nattering away about this because we recently did in fact buy quite a haul of good old Modern Library books, all or nearly all with original dustjackets in very good shape. I priced them quite reasonably -- there are booksellers who simply charge ridiculous prices for these little books, even the most common titles -- and I've had the satisfaction of seeing most of what I bought and priced already sell. This, to my mind, is a vindication of the original premise of the Modern Library, Everyman's Library, and the other, hardcover reprints of classic literature. If the publishers make attractive, well made and inexpensive hardcover editions of the great books, there will always be an audience looking to buy them. Changes in technology, or the culture or the economy be damned. So long as publishers resist the urge to be either greedy or lazy in their designs, readers will want their best books.

Those who live in fear of the gray, gray Kindle, please take note.

And just look at that copy of Nana! Wouldn't you read such an attractive little book? I couldn't resist it.
Posted by usedbuyer 2.0 at 10:43 PM