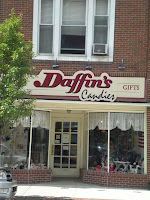 Dinner home, a day or two ago, or thereabouts, being so much among my favorites, I've kept the scraps too long. Spare ribs and sauerkraut, served with mashed potatoes, green beans and cornbread, how could that have been bettered?! Now of course the last sad rib sits in the casserole with too much sauerkraut, and no sign of a potato by, mashed or otherwise to soak up the remaining juices. I can't quite bring myself to let the leftovers go, but neither have I yet been bothered making them up into so much as a serviceable lunch. Instead, I eat saltine crackers, and drink black tea, and don't budge from my bed.

Some sorry kind of cold, or nasal infection, has felled me again. I am not usually so concerned with my health as to do anything much in the way of its maintenance. When I am sick, I wonder at the occasion, rather like some superstitious farmer, undone by unseasonable weather he hasn't the sense to remember coming as sure as it did so often before. I ascribe illness then to bad magic, a neighborly grudge, the wrath of the Gods, the mysterious workings of Fate. I might know better, but I don't. No point in arguing with me then. I will not be harassed, as I'm ill and not up just now to a fight, and I won't like you any better for waiting to correct me when I am again in rude health. (It's called so for a reason, so be warned.)

What I choose to do then is sit in bed and dream of better feelings, better moods, better meals. I refuse reality today. I close my eyes and remember... chocolate.

In my home town, there was a candy shop, called Costello's. This was an old fashioned sort of place, where chocolates were still hand-dipped and where the brittle in the jar was made from butter that came not so long since from a cow one might have passed on the way into town. Everything about my memories of Costello's Candy is sweet with nostalgia, and so not now to be questioned too closely. To my mind, the counter inside was marble, the cases impossibly long, each shelf segmented, dark chocolate and milk, in infinite variation from creams to nuts to fudge and taffies. This was no ordinary store, the sweets packaged in foil and wrappers and arrayed on common racks. This was a place reserved for celebratory occasions, where splurges were made, where one felt proud to take away a dozen of something as otherwise common as carmels, each imperfect cube, dipped and dipped and dipped again in such velvety chocolate as to be, of itself, an example of confectionery art and the perfect expression of love.

As a child, I did not have access to the like of Costello's more than once or twice a year -- say Easter and Christmas -- and had to content myself with more common sweets, had from home or the grocery. But now and then, either of my good grandmothers might have a box, as ladies then saw nothing wrong in giving such treats as gifts among themselves, or receiving such from husbands or admirers. But men tended to eat what they bought, as I remember it, whereas ladies, at least the ones I knew, displayed what they received, and left themselves thus open to the decimating visits of greedy grandchildren, neighborhood playmates of same and, yes, the unthinking men who happened in after supper, with room yet for another sweet.

Oh the rapture of finding any but either the detested maple or coffee flavored creams, unprotected on a coffee table or a sideboard! The luck of such a thing! And to find a butter cream, the best of any variety box, still nested in it's brown cup, unclaimed, that was heaven.

Costello's is gone. In it's place though there is still a candy shop, though with goods manufactured from the far off county seat, some few miles away. Happily, the recipes are as like as I remember the originals, so whenever I go back home to visit, I can not but hope to find, if nothing else, at least the butter creams unchanged. And now, as I am a grown, fat man, I can make pilgrimage without so much as a by your leave from any of the surviving, respectable adults, and buy a whole box of these to eat on my own. I was not raised by wolves, so I always buy two boxes, one, as it were, for company, meaning mostly my brother and father, as my mother does not eat such things herself. But my box is mine. I can't eat more than a piece or two at a time, the candy being almost too rich even for me, but eat the whole box I am always determined to do. The only real privilege of being an adult, I find, is in being largely unmolested while overindulging. Others may shake their heads, seeing me parked in a lot, eating butter creams, but no one may take them from me. (Just you try.)

This last visit, tragically, I left the last of my chocolates behind in my emotional departure. All departures from the company of my now elderly and far off parents are more difficult than not. I know I had need thereafter of the comfort I might have had from just that little box.

I wouldn't much mind, right now, a butter cream, as I'm already feeling sorry for myself. Instead, I'll simply have to eat my crackers, drink my tea, and dream of better things, like dinner home, and butter creams, and peanut brittle, and carmels in dark chocolate and...
Posted by usedbuyer 2.0 at 10:42 PM