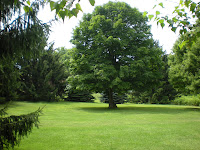 In an ongoing engagement that reminds me of nothing so much as a story by Turgenev, or possibly Chekhov, as it is as funny as that, and as sad, my father continues to mess with his newest neighbors. Some years ago a giant outlet mall opened up the road from my parents. This has meant little to them, beyond the inconvenience of an unexpected and unwelcome increase in traffic on their road, but every bit of commercial progress has other, unforeseen and unintended consequences, even out in the country. My father lost his ditch to the wider road, he was forced to hook up to the township's sewers, his porch became noisier to sit on. For some years now, a further development, a gigantic Walmart has been in the works, not up the road, but in the fields just back of my father's property. Many neighbors sold, in anticipation of the latest construction. Some made a profit, but most didn't really. My father did not sell. Some, though mostly in town, have fought the corporate giant, keeping it at bay for some time now. But come Walmart will. My folks are not opposed in principle. There is already a Walmart in town, just four miles from where the new one will be. That first one dwarfs every retailer around it, but, it seems, it is not nearly big enough. The proposed store will be, as I understand it, the size of airport or thereabouts. My father would sell, if he thought he could get what his land is worth. To date, he has had no such offer. So he sits. But he does not rest, anymore than the creatures of Walton do. All are busy still. 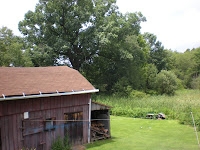 Some years ago, a smart young man, in a suit and tie, went wandering with a clipboard about my parent's place. My father, not meaning to be rude, asked him what the Hell he was about. Seems he had come from a government agency, to check on the wetlands at the back of dad's place. Now we have always called this a swamp, but times change, it seems, and what was once just so much mud and cattails, is now a protected bit of natural wonder. The puppy with the clipboard, in lecturing my father as to the limits of his ownership of this damp patch and his responsibility to in no way alter so much as as a blade of grass therein, had not reckoned on being laughed at. Couldn't be helped, I'm sure, but hardly nice. Taking umbrage at such disrespect of his suit, his tie, his clipboard and his little plastic badge, the government man drew himself up to his full if inconsiderable height and sternly warned my father not to add so much as a another inch of gravel to the path across the little stream that feeds that land, not to let another tire be flung in there by a passing litterer, or there would be the gravest consequences; fines, confiscations, jail. My father, assuming a seriousness he did not actually have about the situation, and respectful silence in the face of the full majesty and power of The State, let the little government man have his say.

The government man, my father finally concurred, nodding sagely, and stroking his little hillbilly beard, was awfully persuasive. No doubt he was right in all he'd said. My father considered himself warned. One fact though in the government figures seemed to my father to be not quite right. Directing the younger man's gaze out over the expanse of the little swamp, pointing out the height of the grasses, and the presence of crayfish, birds and fish, Dad suggested they might want to check their measurements more closely. Seemed to him they'd got the depth wrong.

"I'd be willing to bet," he quietly told the little man with the clipboard, finally smiling, " I could slip you right in there, clipboard, car and all, and none the wiser."

There have been, to date, no further government inspections of the wetlands behind my father's barn.

But now my father is confronted not with just one little bureaucrat or anything so far off and abstract as The State, but rather with the real power of Waltons, their minions, lackeys and runners, with lawyers and engineers and hired Pendot crews. His front yard has been staked, a path laid out across, around and up through the trees he planted forty years ago, all of this not in the service of anything so nebulous as preservation, but in the name of further progress, for a driveway for the Walmart. Under the pressure of such a force, the poor must always, inevitably bend. My father knows this. He accepts it as he does the weather, the indifference of politicians, Republicans and Democrats, to anything but money, and the passing away of the country life he's known for all of his. But my father will not bow.

"Might as well poke the bear a little," is what he says, "if he's going to eat you anyway."

And so my father now has a lawyer. Notarized letters have been exchanged. The smartly dressed young woman who, on her first visit, allowed my parents to assume she worked for the state of Pennsylvania, but who later proved to be neither more nor less than a real estate lawyer for the Walmart Corporation, was met with a very different reception on her second visit to inspect the arrangements for the destruction of my father's front-yard and the cutting down of his trees. she insisted my father was owed nothing for the land. That Walmart needn't spare him a nickel or a thought. Any suggestion that Walmart hadn't a perfect right to do just as they damned well pleased was absurd, and probably Communist, or at the very least un-American. She was only passing the time of day with my Dad out of plain good will. Dad was almost painfully polite again, but he'd decided on a different strategy this time. Having lamented at length the loss of so many beautiful old pines, he explained how that ten foot wide stretch of lawn out front, ironically enough, is just about his favorite bit of earth in the world. He told the woman and the bemused road-engineers in her hire, how he often sat, just there, of an evening, to watch the world go by, how invested that length of grassy dirt really was for him with all the happy memories of childhood, of having watched his children and grandchildren playing there, etc.

"I wouldn't be a bit surprised, next time you're back this way," he said, "if I wasn't sitting right there."

An offer was made soon after, though the amount was as insulting as the lawyer's letter it came in, and the family lawyer has said so and asked ten times the sum. There the matter stands, for now.

I'd have to say, they ought not to assume my father won't be sitting, just where he said he would, next time the Walmart folks come back. He might just offer them a beer, and he might not. Depends.
Posted by usedbuyer 2.0 at 6:47 PM