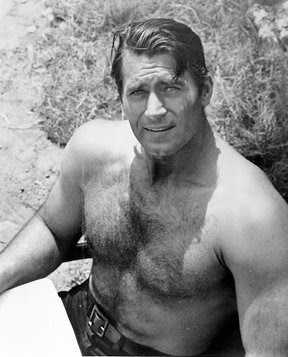 The husband is in the other room watching a DVD of "Cheyenne," waiting for Clint Walker to take his shirt off, again. I quite understand. See for yourself. I do wonder if Mr. Walker, still very much alive, evidently, has had occasion to consider the number of times he performed this particular service for his many gay fans in the course of his film and television career. As he is alive, let me thank him here, on behalf of us all. Thanks, Clint. You were awesome. Our continued attention, to his once quite remarkable good looks, if not to his career, isn't meant to be demeaning. I only bring it up because I'm curious to know if, even at the time, when stripped to the waist, he didn't find the admiration of gay men flattering. I've no reason to think he was necessarily even aware of it, or us, but then, I have no reason to assume otherwise either. It was, as so many like to imagine, a more innocent time, or rather, it was certainly a less open-minded atmosphere in Hollywood, forty or more years ago, if no less queer. One might safely assume, even then, Clint caused something of a flutter in the hair and make-up trailer, or among the less convincing cowboy extras. There must have been someone along the way, some powerful admirer in the studio, or even just a fan on set or at the beach, who asked him to flex a bicep, or asked about his work-out routines without really listening to his answer. It's possible, I suppose, that Mr. Walker mistook their curiosity for genuine interest in his diet and the like, but he did work in the entertainment industry after all. But however innocent Clint may once have been of the prurient nature of our interest, he has by now lived long enough to know something of the world, I should think, and I imagine, whatever his feelings on the subject of marriage equality and the like, he might by now be grateful to know there are still admirers, admittedly of a certain age, willing to watch hours of black & white westerns, just for a glimpse of his tits.

That's immortality, of a kind.

Before the introduction of legal pornography, video cassettes, and the innovation of Internet exhibitionism, the sexually deviant, among whom I proudly stand or stretch out, as the occasion might demand, had fewer options. Should any of my readers be so young as to not remember the time of which I write, you will simply have to trust me when I tell you, there was a day in America, not all that long ago, when not every male of legal age masturbated on camera for the delectation of friends, lovers and strangers. Hard to imagine, but quite sadly true. In those far off days, the sight of, say, Clint Walker without a shirt, in ridiculously tight jeans, chopping wood, as it were, constituted something of the same thrill our even more remote queer ancestors must have had the first time they stood in mute admiration and fiddled with their own, or if they were very bold and very lucky, their neighbor's codpiece, while staring up into the magnificent, larger than life, perfect marble ass of Michelangelo's David. Clint Walker's ass, whatever it's present state of dignity, was once every bit as magnificent, hard and larger than life. And Clint had the better of David, even at only life size, when it came to the magnificence of his junk, let me just say, at least to judge from still photographs of the period of Clint's greatest exposure. (Poor David.)

More than reminding everyone of the darker days of our collective sexual history though, I decided to pay tribute, just here, to the glory that was Clint Walker's ass, not only because it is the least his ass deserves, but also because I am genuinely curious that a television star from before even my time, could still have such a hypnotic effect on my husband. He has the same access now that I do to more explicit celebrations of masculine pulchritude. One has only to see his shocking slide-show of thoroughly filthy screen-savers to know that he has taken full advantage of the opportunities presented, free, by our friends in the amateur porn community. (Common interests make a marriage work, by the way, they really do. A bit of free advice.) So how is it, that Clint Walker, or Chuck Connors in "The Rifleman," can still displace in his dirty mind the more obvious charms to be encountered on "The Bait Bus" or "His First Time"?

The answer, to the extent one is either needed or all that interesting, may well be lost in the mists of autobiography and popular culture. The fact however remains. Given the chance to watch Clint Walker dismount a horse or to see two, or more, beefy boys from Venice Beach wrestle nude in baby-oil, my husband will gladly watch both. Sensible fellow. But he will still find Clint Walker, shirtless, at least as, if not more, thrilling.