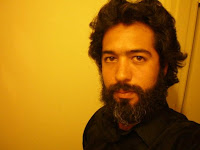 I use the word "boy" with many men no longer obviously so. For whatever reason, no doubt a little twisted, beauty in a man is easiest for me to see in those asymmetries and unrefinements, in the clumsiness of gate or the eagerness to please that, in even an old man, still suggests some some essential, residual androgyny, uncertainty, some grudging refusal, perhaps most deliciously unconscious, of the full weight of masculinity, of something still soft, still malleable, still less than settled and self-conscious and self-confident in his carriage, his cocksmanship, his right. In preferring the word "boy" to "man," I do not say anything about a man's actual age or station, anymore than I mean to suggest that some muscled hunk might deserve my admiration less than his skinny brother, or that a man with grandchildren might seem less boyishly attractive to me than his skateboarding descendants. In fact, it is the contradiction I admire most: gravity in the young, giddiness in the adult. That is the dynamism that tends to spark my interest, that draws my eye away from whatever caught it, to what may hold my attention.

In antithesis then to the Boy Scouts, I like to make boys of men.

Why is this? To begin with, I've always preferred women to girls, both in company and and as a noun. To call a girl a woman is something so infrequently done as to either make the expression individual, a compliment to her maturity, without meaning to detract from or ignore her youth, to acknowledge in her some quality beyond her years, or it's just creepy, conjuring the lasciviously avuncular, an older man wishing it were so that his interest might be less obviously exploitative. To call a woman a girl, in any context other than the amorous -- a context in which I have little experience -- or in fun, is insulting. But to call any man a boy, so long as race or respect are not at issue, to my mind, at whatever the age the man, is to do him the favor of admiring that youth that in him may still glow, to see some innocence still behind the eyes, a mouth still eager for jokes, and kisses, a form, however now padded out with labor and dignities, still frolicsome, still game, still fit to run and fuck.

There are then in my life as many boys as there are men, though none that I call boys are really any less then men. One friend in particular, not my husband, I hasten to note, I invariably address as My Own Boy, as in my eyes, he will always be a kind of Peter Pan; younger than me by no more than a decade, he is in every other way younger than I have ever felt myself to be since childhood; he is romantic, in both his politics and his personal life, he is adventuresome and daring, nomadic, gentle, sweet. He comes into my life, periodically, fleetingly, with all the unanticipated energy and enthusiasm of a playfellow seen every day rather than once in a very great while. Even when he is sad, as sadly he now so often is, it is a sadness born not of experience but of innocence betrayed, again. As he himself seem always to be in love with some boy, some fool so truly young, so beautiful to look at as to dazzle, but still so lacking in maturity as to never quite appreciate just how dazzling is my friend in turn, and how solid, true and honest, My Own Boy comes to me most often with his heart in need of mending. He always apologizes for this. He needn't. What could be more charming in a boy than a broken heart?

Then there is My Work Husband. Again, he is not all that much my junior. Intellectually, as a student of history, as a person with a very specific ambition and the means and motivation to see this realized, he is very much my superior. I am always a little in awe of his discipline, his shrewdness, his strength of character. But what delights me every day we work together is his silliness, which calls out my own, his grin -- there being no better word for how he smiles -- his very young, very handsome face and the sparkling, witty unseriousness which shyness might conceal from other people, but into which I have the privilege of dipping nearly every day. How I will miss him when his ambitions are realized and he leaves us at the bookstore!

Finally, I get to the man who inspired all these owleries tonight. It is his picture that so handsomely glowers from the top of the column. When we worked together briefly at the bookstore, we were too little thrown together, he off hosting events and the like, while I worked, as I still do, largely on the sales floor. But look at him! How could I not seek him out? How could I not want the chance to study that face, look into those eyes, make the pout of that mouth stretch into a smile? He is awfully good looking, isn't he? with or without the beard. ( I may have been the only admirer of all those whiskers. He grew it for a theatrical production. I chose to use this picture to prove my point, that age can not dim, nor whiskers conceal the joy in a genuinely boyish face, at least for me. How I should have liked to be tickled with those whiskers!) This friend is soon off to the East, throwing up his interests here to pursue a new line, to become a landscape architect, if I've got that right. It was my special pleasure to take this Brown Eyed Handsome Man out for dinner and drinks at a local pub, just the other night, to celebrate his acceptance in the graduate program he'd decided on, and to have one last chance at a conversation, and to look at him closely.

Who knows or cares what we talked about? I kept his glass full, knowing he'd drink it, sure that, if anything, he'd be even prettier slightly drunk than sober. I was not wrong. His eyes most often seem but half open, and all the sexier for this. With a few mojitos in 'im, he relaxed almost to drowsiness, but warmed the longer we sat, like a cat in the sun. He was full of ambition and enthusiasm for his new venture. He was a little skittish of the enormously new direction his life was about to take, and boyishly proud of his success in getting into the school he wanted. He was dead sexy, as he always has seemed to me, and charming, but sweet, that night, as well. He even told a story about an accident while golfing -- golfing! -- and never bored me for a minute, if anything, he managed to make even golf flirtatiously funny. Imagine that. It was a lovely evening I had, in the company of a lovely man. What a wonderful boy!

The Edwardians allowed for a special class of person, the professional beauties, most often actresses and or the mistresses of rich men, which at the time often came to the same thing. The primary role of such women was to be decorative, charming, witty and alluring. (Think geisha in tight corsets and bustles.) The modern equivalent, I might concede, would be the empty headed, rapacious beauties from reality shows and the like. But really, there is no comparison between the two types. The professional beauties, whatever their morals, were ladies. No such could be said Paris Hilton or Kim Kardashian, could it?

In my own modest way, I have about me, but some extraordinary luck, many handsome and interesting men, and some boys, at least as I see them, who really ought to have sugar, daddies or mammas, as their preference might dictate. I only wish I had the money to "sponsor" the ambitions of such properly. As it is, being both poor and married, I've had to content myself with friendship. And no bad thing that's been. Saying farewell the other night to A Brown Eyed Handsome Man, being allowed briefly to hold his brown hand, to hug him and linger perhaps a moment too long in his altogether straight embrace, I was glad of the chance to see something shy in his otherwise wicked smile, to hear a little something sad in his otherwise confident conversation. I was glad of the glimpse of a beautiful boy in so very handsome a man. I wish him every success. I wish now I'd kissed him.
Posted by usedbuyer 2.0 at 11:26 PM