They Have to Take You In 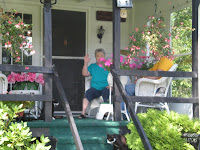 When I was a child, home was an irreducible fact. Its size and measure, its proportions, occupancy and even its location were mutable, but home it always was. I might imagine myself elsewhere, what child does not? I might even come to live elsewhere and quickly did, it seems to me now, but to it I might securely return forever. I was lucky in that. That was as it should be. Now I'm grown, home is divisible. Going home means one thing going, and quite another coming back. I'm grateful for the chance of both.

Home for me now is where I am, where I've made my life. My parents, briefly, had some small experience of life away from where they were born; my father had an adventure to California with a friend before they both were sent to war in Korea, my parents lived for awhile in Cleveland, but did not take to it. They came back and stayed. They raised me in the house my father was raised in, in the house, at least in part, his father raised, the house in which my brother now lives, our parents just across the yard in a house they bought and built before I was twelve. That is the place I knew as home and to which I just returned and from which just yesterday I came home. Our patrimony, those three and a half acres, those houses, buildings and sheds, that ground, date back in our family almost further than our admittedly careless memories can recall. Repairing the kitchen ceiling once in the elder house, my father found a carving on a beam dated 1857, but did not know whose hand made the mark. My parents had the advantage of being sure at least of the place they occupy. I was not made so, did not stay, couldn't have and still become who I am. I had to make my home in a place other than home, and with a man, a circumstance my parents could not have anticipated and may never fully understand, though they've come to love us both and respect the choices I've made and the man I made them with. Home for me now is where he is, as much or more than where they still are, and for longer now than I lived at home.

My parents are growing old, far away from me, still in the place where they grew up, where they met, fell in love, married, worked, raised their children. With each visit home, I wonder now how long they will still be as they are, as I have known them all my life. I can think of them nowhere else but where they are, where and as they have always been for me. Again, I count myself lucky. Like most people who earned their living with their backs and their hands, standing, bending, working, they are now older than their years. My father can not trust his legs to go hunting anymore. My mother doesn't make candy at Christmas, or get to every cobweb, or drive much, though she could if she wanted to. The depredations of illness and loss tell on them both, evident even to each other, though neither seems to see anything in the other but what has always been there, been counted on, known and trusted. They worry each other, and about each other, as much or more than they worry their children. When I'm not home, I hear all this on the telephone. When I am home with them, I see it, though not when they laugh, at each other, with me, at the weather, chance, memory, time, even death. That last, I think, may be the peasant in us, making rude gestures and jokes more easily certainly than any of us might pray, trusting more to luck and love than to any God or Fate.

54 years ago, today, my parents married. They stayed -- to raise their children, care for their parents, for strangers and the children of strangers, passing the seasons and the years together, inseparable. To imagine either without the other, my sister, who like me made a home from scratch, elsewhere, in her case in far away Texas, is unimaginable, unspeakable, dead wrong. She will not hear any talk of wills or death or the passing away of her other home or of the people in it. I understand her refusal. Our parents can not quite afford such anymore. I'm sure they find her devotion as touching as I do, but neither imagines the other indestructible -- the evidence, as my Dad might say, is all against them. Every day for them now, together, they would joke, is a jape at mortality, as it ought to be for us all, but, I think, also an affirmation of the rightness of their lives, though they'd never assume anything so important to themselves. I love them and may say such things.

If I do not live nearer them, it is no fault of theirs, let me be clear about that, but neither was it a choice I had. And if I've made a home and a family of my friends in a way and a place away from them, they made a home to which I still gratefully return, and now at last with the man in whom I found my other home. If I have made a home, it is only because they taught me how.

I wish them sincere felicitations on this day. I send them our love. I miss them more than I thought possible. I miss home already. I'm glad to be home again.
Posted by usedbuyer 2.0 at 10:02 PM