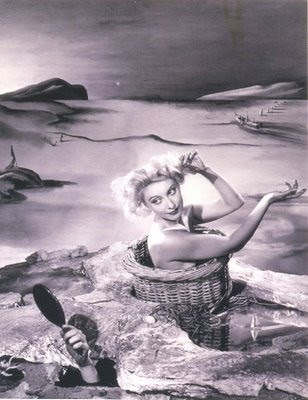 One of the lesser, but none the less persistent temptations of the Bargain Books tables in the bookstore where I work are the art books. I have never been a collector of these. The size and subjects of these tend not to lend themselves to a library such as mine. Photography though has always had an appeal. For many years, during what was a kind of renaissance of gay culture, it seemed that no gay photographer, past or present, wasn't being celebrated between covers. This was a wonderful opportunity for a humble bookseller such as meself, to contribute rather spectacular gifts to the gay Christmas revels, as these, as with all photography books not by Ansel Adams, had the shelf-life of peaches and were sure to end sooner rather than later on remainder tables, often as not still sealed in their original shrinkwrap; unopened, unmarked and pristine. Dear A. acquired quite a library of glorious queer smut in respectable hard covers in just this way. Eventually, I was warned off, as shelf space in out house became increasingly tight and as our fellow celebrants diminished in number, so that there were fewer and fewer gay boys sprawled, come Christmas morning, on our carpet, each with his nose in a book of nudes. Nowadays, There are fewer temptations on the tables too.

But now and then a book will catch my eye. Angus McBean: Portraits, originally from The Monacelli Press was such a one. So far as I can see, this division of Random House tends to print the kind of glossy interiors and travels that always make me think of the disappearing rain forests, rather than of luxuries denied the likes of me. No matter. Three years ago, someone with the wonderful name, Terance Pepper, the curator of photographs, at The National Portrait Gallery, London, produced this wonderful book for said publisher, and did it wonderfully well.

At roughly eleven and a half by nine and a half, the book is not so huge as to be unmanageable, and the production values throughout are splendid. If the biographical detail of the artist provided is slim and a bit prim, considering the hints at all sorts of fun he had photographing theatricals and celebrities, making theatrical masks and shoes, and getting nicked -- no fun, that -- for cruising the cottages, this is, after all, a quite serious sort of presentation. (I will have to look for a copy of the autobiography referenced in the text, Look Back in Angus.) For what it is though, this is a delightful book about an artist heretofore unknown to me. And at a bargain price of ten bucks, I could not pass it up.

Angus McBean, it seems, was a gnomish little queen with a square beard, a twinkling and discerning eye, and a penchant for whimsicality that first found expression in making rather wonderful masks, puppets and the like. At the same time, he became an accomplished photographer, bringing to his theatrical work, and his portraits for fashion and art magazines, that same sense of grandly goofy invention; using elaborate props and sets to layer his images, comment on and identify his sitters, and express his delight in the recognizability, as well as the beauty of the famous actresses, producers and comedians he photographed. Bea Lillie, for instance, poses on a huge keyboard, behind her, like a constellation against the black of the piano, a caricature of her profile, in chalk or paint, or again, later, Miss Lillie posed using the cups of two lilies like the mouth and ear pieces of an old phone. Many of McBean's portraits are far more elaborately staged, requiring full sets, to put Peggy Ahscroft, as Portia, into a surreal landscape, Flora Robson bursting through the dry earth, or Diana Churchill's head, seemingly misplaced by the leg of a kitchen chair. Many of the portraits are straightforwardly beautiful shots, of his friend and regular subject Vivien Leigh, for instance, or Audrey Hepburn. The photographer seems to have been very much committed to making even his less beautiful subjects look glamorous, but whatever the subject, setting or pretext for a particular photograph, McBean seems very much to believe in glamour as an absolute value. No one is left unflattered. His portraits are like Beaton's in this, but none is as cold as Beaton's photographs tend to be, and the best of McBean's are touched with an impish humor wholly absent from Cecil Beaton's studio photographs. McBean took glamour quite as seriously, but perhaps not himself.

As if to prove this, and to provide this book with it's most delightful surprise, there are reproduced here Angus McBean's annual self portraits, sent out as Christmas cards. In each he has staged some fresh silliness; his own head seemingly abandoned on a back stair, himself in pajamas with an open umbrella, sitting in a fish tank, or, my favorite, from 1982, when he was already quite an old fellow, lifting the globe from off a miniature tea party, where he is also the host, his guests, elaborately coiffed and costumed Edwardian dolls, doubtlessly of his own making. I would want to own this book just for the self portraits.

The wonder, for me, of finding such a book in the Bargain Books, besides the affordable price, is that I can still, in this way meet some unknown but congenial spirit, be introduced to the work of a delightful artist, and carry him home with me, to pour over his pictures at my leisure. Happy chance.
Posted by usedbuyer 2.0 at 12:21 PM