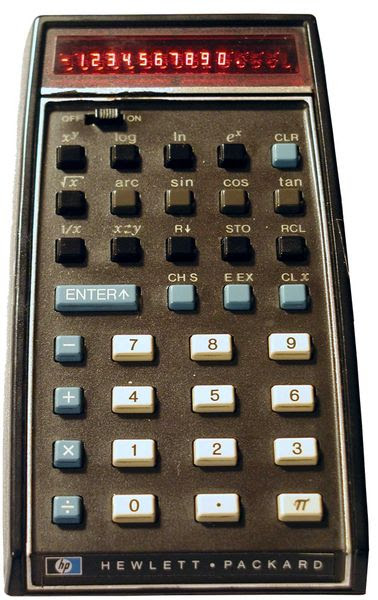 I still remember the day, in the fifth or sixth grade, I don't remember which, when one of the first male teachers I ever had, brought his calculator in for something like show & tell. The thing was the size of a Buick, had more buttons than a Doris Day dress, and had, as I recall, cost the man a small fortune. He explained the many marvelous functions of his magical machine. It all had something to do with numbers, so I can't say I really listened very hard. What has stuck with me though was his rhapsodic description of the near future. These calculators would soon be so small and inexpensive that everyone will have one, "They will give them away like toys in a cereal box," he said. We were skeptical of this, or perhaps I was just bored, but somehow, I never forgot that math instructor's prediction.

I remember also the great debate in earlier days as a bookseller as to the need for and efficacy of "a computerized inventory." At the time, we still kept track of these things on index cards, in long files that were carried out to the floor where the books were counted and the figures corrected on the cards. At the time I was managing a small branch store, the smallest store in the company. Having only just got our inventory cards into proper order and our counts corrected, I was reluctant to endorse the conversion. The store was never quite profitable enough to justify its lease, from out of which the company tried regularly to get. The last thing I wanted was any additional operational expense to tip the the scales. I was not much then for innovation. The lease being at last escaped, the store closed anyway, but I held off the upper management's help with my inventory system as long as I could.

The Internet, when it was still little more than a painfully glowing green screen, was explained to me, at length, as the single greatest development in communication since the invention of the telephone. Rather than agape with wonder, this information passed by me without producing so much as a nod. Likewise, later, when I had the opportunity to work with an early graphics program on an Apple Computer, my answer was to draw with a pencil what I was slowly being made on the machine. "When I need a two thousand dollar pencil," I told the computer enthusiast, "that can do this faster than I can, I'll be happy to hear more."

These little anecdotes may make me out more a Luddite than I am. The point of them here is to show not my resistance to technological innovation, but my abject failure to appreciate the opportunities I've been given, down the years, to see the future. I am not then philosophically opposed to new technology, so much as I am either too dim, or too shortsighted to see even what's put directly under my nose. I think I speak for many when I say, in hindsight, I've been a fool.

The price of the basic Kindle has been reduced by sixty dollars to just $299.00. The news of this went right 'round the world and did exactly what it was meant to do: the value of Amazon's stock went up 2.3 percent, by close of business day. I've seen one of these basic readers, actually handled it and pressed a few buttons. It reminded me very much of that math teacher's big calculator. It had the same clumsy feel to it, the same awkward unfamiliarity that suggested nothing so much as a simple thing, in the case of the calculator, simple addition, and in the case of the Kindle, a book, rendered unnecessarily expensive, complicated, and bulky. I've nothing against the thing, or any of its new rivals. I already know people who swear by their Kindles, who seem never to experience unsupported problems with theirs, or leave them in taxis, or spill their coffee on them. It is rather marvelous, I suppose, that one can have access to so many books in just the one wedge of plastic. I can't say I've been moved, even by the recent price reduction for what is, after all, just a kind of jukebox -- songs to be purchased separately -- to rush right out and buy such a thing for myself.

But then, please bear in mind how right I've been about this sort of thing heretofore.
Posted by usedbuyer 2.0 at 11:19 AM