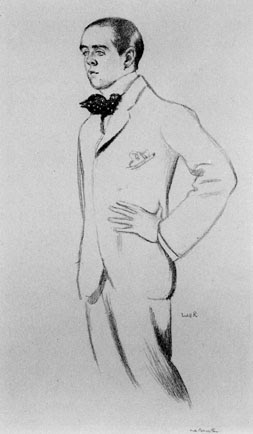 GOING OUT FOR A WALK

It is a fact that not once in all my life have I gone out for a walk. I have been taken out for walks; but that is another matter. Even while I trotted prattling by my nurse's side I regretted the good old days when I had, and wasn't, a perambulator. When I grew up it seemed to me that the one advantage of living in London was that nobody ever wanted me to come out for a walk. London's very drawbacks--its endless noise and hustle, its smoky air, the squalor ambushed everywhere in it--assured this one immunity. Whenever I was with friends in the country, I knew that at any moment, unless rain were actually falling, some man might suddenly say "Come out for a walk!" in that sharp imperative tone which he would not dream of using in any other connexion. People seem to think there is something inherently noble and virtuous in the desire to go for a walk. Any one thus desirous feels that he has a right to impose his will on whomever he sees comfortably settled in an arm-chair, reading. It is easy to say simply "No" to an old friend. In the case of a mere acquaintance one wants some excuse. "I wish I could, but"--nothing ever occurs to me except "I have some letters to write." This formula is unsatisfactory in three ways. (1) It isn't believed. (2) It compels you to rise from your chair, go to the writing-table, and sit improvising a letter to somebody until the walkmonger (just not daring to call you liar and hypocrite) shall have lumbered out of the room. (3) It won't operate on Sunday mornings. "There's no post out till this evening" clinches the matter; and you may as well go quietly.

Walking for walking's sake may be as highly laudable and exemplary a thing as it is held to be by those who practise it. My objection to it is that it stops the brain. Many a man has professed to me that his brain never works so well as when he is swinging along the high road or over hill and dale. This boast is not confirmed by my memory of anybody who on a Sunday morning has forced me to partake of his adventure. Experience teaches me that whatever a fellow-guest may have of power to instruct or to amuse when he is sitting on a chair, or standing on a hearth-rug, quickly leaves him when he takes one out for a walk. The ideas that came so thick and fast to him in any room, where are they now? where that encyclopaedic knowledge which he bore so lightly? where the kindling fancy that played like summer lightning over any topic that was started? The man's face that was so mobile is set now; gone is the light from his fine eyes. He says that A. (our host) is a thoroughly good fellow. Fifty yards further on, he adds that A. is one of the best fellows he has ever met. We tramp another furlong or so, and he says that Mrs. A. is a charming woman. Presently he adds that she is one of the most charming women he has ever known. We pass an inn. He reads vapidly aloud to me: "The King's Arms. Licensed to sell Ales and Spirits." I foresee that during the rest of the walk he will read aloud any inscription that occurs. We pass a milestone. He points at it with his stick, and says "Uxminster. 11 Miles." We turn a sharp corner at the foot of a hill. He points at the wall, and says "Drive Slowly." I see far ahead, on the other side of the hedge bordering the high road, a small notice-board. He sees it too. He keeps his eye on it. And in due course "Trespassers," he says, "Will Be Prosecuted." Poor man!--mentally a wreck.

Luncheon at the A.s, however, salves him and floats him in full sail. Behold him once more the life and soul of the party. Surely he will never, after the bitter lesson of this morning, go out for another walk. An hour later, I see him striding forth, with a new companion. I watch him out of sight. I know what he is saying. He is saying that I am rather a dull man to go a walk with. He will presently add that I am one of the dullest men he ever went a walk with. Then he will devote himself to reading out the inscriptions.

How comes it, this immediate deterioration in those who go walking for walking's sake? Just what happens? I take it that not by his reasoning faculties is a man urged to this enterprise. He is urged, evidently, by something in him that transcends reason; by his soul, I presume. Yes, it must be the soul that raps out the "Quick march!" to the body.--"Halt! Stand at ease!" interposes the brain, and "To what destination," it suavely asks the soul, "and on what errand, are you sending the body?"--"On no errand whatsoever," the soul makes answer, "and to no destination at all. It is just like you to be always on the look-out for some subtle ulterior motive. The body is going out because the mere fact of its doing so is a sure indication of nobility, probity, and rugged grandeur of character."--"Very well, Vagula, have your own wayula! But I," says the brain, "flatly refuse to be mixed up in this tomfoolery. I shall go to sleep till it is over." The brain then wraps itself up in its own convolutions, and falls into a dreamless slumber from which nothing can rouse it till the body has been safely deposited indoors again.

Even if you go to some definite place, for some definite purpose, the brain would rather you took a vehicle; but it does not make a point of this; it will serve you well enough unless you are going out for a walk. It won't, while your legs are vying with each other, do any deep thinking for you, nor even any close thinking; but it will do any number of small odd jobs for you willingly--provided that your legs, also, are making themselves useful, not merely bandying you about to gratify the pride of the soul. Such as it is, this essay was composed in the course of a walk, this morning. I am not one of those extremists who must have a vehicle to every destination. I never go out of my way, as it were, to avoid exercise. I take it as it comes, and take it in good part. That valetudinarians are always chattering about it, and indulging in it to excess, is no reason for despising it. I am inclined to think that in moderation it is rather good for one, physically. But, pending a time when no people wish me to go and see them, and I have no wish to go and see any one, and there is nothing whatever for me to do off my own premises, I never will go out for a walk.
Posted by usedbuyer 2.0 at 1:47 AM