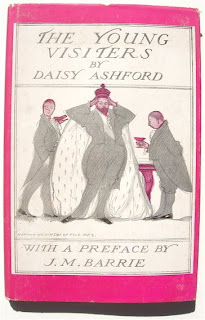 From The Young Visiters, or, Mr. Salteena's Plan, by Daisy Ashford

"Ethel and Bernard returned from their Honymoon with a son and hair a nice fat baby called Ignatius Bernard. They soon had six more children four boys and three girls and some of them were twins which was very exciting. The Earl only got two rarther sickly girls called Helen and Marie because the last one looked slightly french."
Posted by usedbuyer 2.0 at 2:25 AM