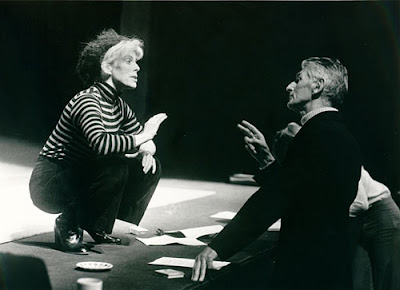 The best books, like some of the best meals -- some -- are unplanned. A book discovered under other books, or come across the buying desk, purchased not by me, but for me to find later, on the shelf, waiting to be priced, and read. The possibility, so obvious and yet a little staggering, that there will always be such good books yet to be seen, owned, read and reread, vivifies and justifies not just my job but all the waking hours of my day. If my greatest pleasure as a bookseller comes from putting good books, favorites and other, into the hands of readers, the greatest accidental joy of my job is in this; in the finding and reading of books hitherto unknown to me, the making of fresh acquaintance, in its way, almost as great a pleasure as old friends.

After a couple of decades selling books, and a lifetime of reading, there aren't so many surprises as there once were, perhaps. I have so many more connections now to so many authors, periods, styles and subjects. The great secret of all devoted readers is that there are really no new books, no new stories, just new connections to the familiar, newer tellings of old truths, fresh voices and the past, always the past, to which one may be returned, only now with better, if weaker eyes.

Not every new book is new, of course. Working with used books, one may find a book from a decade or a century past and see it for the first time. Perhaps the most remarkable charm of books is in their survival. When a book is first published, it is one among so many. There is no way, working in a bookstore, to see all the books one might read. The trees get lost in the forest. And one's interests change, one's tastes alter, subtly and not so subtly over time. A book that, had it been published just today, I would be eager to read, might actually have been published in 1996, when I wouldn't have known enough to notice it, when neither the author or the subject had yet been called to my attention. But books seldom pass entirely away. Buying and selling used copies, I'm given second, and third, and fourth chances to find a book I'm happy to take up long after I might first have done, only now being ready to read it.

Not every book need be a neglected masterpiece to create this same surprise and be taken home immediately to read. A whole vast literature of supplemental reading, of books not so much necessary of themselves, but in support of other books, other authors, drifts into view, presenting views not considered, aspects of a subject already being considered, though not from this unanticipated angle. These are the books that make a reader like me wonder at the workings of chance. Who knew I would want to read a memoir by an actress I have seen so rarely that her face was more familiar than her name?

The full subtitle will explain my interest a little. Billie Whitelaw, Who He? A memoir of the life on stage, on screen, and in collaboration with the great Samuel Beckett. Bingo. Beckett, as I've mentioned before, was not an enthusiasm of mine until quite recent days. I evidently had to be well past forty before I took him up and read his fiction. The publication of a his novels in Everyman's Library finally set me reading him. I was skeptical still that I would want to, until I'd started, found him not just a genius -- a fact I was willing to concede without experience -- but funny, and moving, and weirdly enough, eminently readable. Not easy, you understand, but genuinely readable. Then came a handsome boxed set of his collected works in English. That purchased for a Christmas or birthday present, brought more of Beckett into this room, and gave me a chance to wander with him further. Now his letters are coming out. The first fat volume is still too new, and too expensive yet for the likes of me, but it is just the sort of book, sooner or later, to end up on a table of remainders, or to come across the buying desk. I've only to wait for that. Meanwhile, I have plenty of Beckett to read as it is. And now I've read Billie Whitelaw's memoir, in almost a sitting, and I am so glad of having had it find its way to me.

Billie Whitelaw is of the last generation of British actors to have experienced rep, stage, screen and television when each of these was still not only a thriving concern in England, but when each was undergoing the kind of change and experimentation that produced good and lasting work, addressed previously neglected audiences, and seemed unafraid to explore unpopular and and difficult subjects, using unconventional methods and new technologies and unlikely accents. Whitelaw made her bones as a kid actor in traditional productions, and on the radio, posed for cheescake, acted in "kitchen sink" dramas where her Northern accent fit, but she was also the second or third Desdemona to Olivier's Othello, and went on to collaborate -- quite the best word for it -- with the great playwright, Samuel Beckett, for the last twenty-five years of his life, creating and interpreting roles in some of his most famous later work, roles in some cases written specifically for her. That is a remarkable career by any standard.

Reading her memoirs, I was struck by what a pain in the ass she must have been. She knows this about herself. Her memoir is as frank as to her faults as it is informative and entertaining about her triumphs. Unconventional in both her personal and professional life, firmly left-wing politically and more an instinctive, and emotional artist than a trained, technical actress, she must have been, as she freely admits, a real challenge for such old-school professionals as Sir Larry and his lot. She gives all the talented people she worked with their due, at least in her book, but she's not above being bitchy. If she is most unsparing of herself, it isn't as if anyone else in her life was spared much either. One person though is treated not just respectfully, but with worship by Whitelaw: Beckett. It is her relationship with Beckett that elevates the book, as it did her career, and her acting, into something rare and wonderful.

From her first role in a Beckett production, Play, at the National Theatre, in which she was made up in flaking oatmeal and stuck in a jar, Whitelaw's uniquely musical understanding of the words, and her willingness to let go of more usual techniques and preparation, positioned her perfectly for all the roles that were to come. Years later, when she achieved amazing things in Footfalls, and Rockaby, and Not I, working on television and stage productions of these and other Beckett works, directed by Beckett himself, or in constant communication with him via telephone after he had ceased to travel, it was Whitelaw's same instinctive trust and belief in the man and in his work that produced such definitive performances. At some cost, it should be noted. The weird physical demands, for example, of not blinking, or of sitting perfectly still, a light just on her mouth, in total blackness feet off the stage, etc., took an unexpected toll on the actress. The greatest cost to Whitelaw though came as a result of the extraordinary and strange intellectual and psychic rigours of working in such unusual and difficult texts, using tools she was forced to find only from within herself, with the help, if it can really be called anything so simple as that, from Beckett. In a way, Beckett made her, and in another, just as real, he wrecked her. She herself admits how hard it was to do what might have been good, having done something great.

I knew dancers who had performed so long, and worked so hard, in one style as to unsuit themselves for almost any other work. I'm thinking just here of a woman I once knew who had performed throughout her youth with Katherine Dunham, whose unique choreography shaped dancers to suit just that dance and no other. "I could no more dance ballet again," she once told me, when she was still just in her twenties, "than I could learn how to walk again." Dunham was in her bones, her hips, the shape of her limbs, the rhythm she moved in. Dancers give up a great deal to study and perform such specific movement, they truly suffer for what they choose to do. Ask them to dance at a party, ask them after they've retired, and you'll see what I mean.

Yet with Whitelaw, as with most dancers I've known, the work was worth it. Whitelaw is lucky, as are we, in having had so many of her Beckett performances recorded. Anyone can, s I've done tonight, go online and find film from the television recordings of some of her most famous roles. Having read something of the work that went into each of these short pieces, I have a renewed respect not just for Beckett, but for the actress, the artist, that shaped them.

And Whitelaw's book is a wonderful record of this extraordinary collaboration with the poet, for such he was. It is also a surprisingly warm portrait of a remote man. The actress and the poet came to an almost perfect understanding. That's a pretty rare thing, in life, and in the theater. They loved one another, as artists, and as friends. If they were never lovers, each having already quite enough of his or her own, they were in a way, soul mates. It was a wonderful thing to read something so personal about one of the greatest artists of the last century, and from one of his greatest collaborators in English.

Billie Whitelaw waited ten years to find me. Having read her book, and now watched her perform, -- and I must have watched Footfalls three times through just tonight, -- I am glad she waited until I was ready. I'm enormously grateful to Billie Whitelaw for both experiences.
Posted by usedbuyer 2.0 at 10:46 PM