Books about books are a category of thing of which I do not, in general, entirely approve. Too often, these tend to come in but two subcategories: books that recommend books, primarily to people who don't read books, or at least don't read enough books to be interesting, and books by book dealers and collectors in which books I do not often care about are discovered cheap and purchased by people for whom I would not care should we meet. The first are harmless enough, sometimes even helpful, even to actually literate people. Nancy Pearl's rather wonderful Book Lust comes first to mind, not only because I adore the woman, but because I've had occasion to use her books, and not just in the course of trade. The format of them is friendly, her advice sound, her taste good and her eccentricities of title, and her good humor, superior. Much of the rest in her area tends to the sententious or the relentlessly self improving. My habits are already stuffy enough, and any hope of reading for the improvement of character being long since abandoned, I would as soon be neither lectured by my betters nor cheered by my inferiors. Harrumph. As to the memoirs of antiquarians, dealers and the like, much as I may find these sympathetic, I've also found that my interest flags as soon as the titles discovered start sounding more interesting for their potential price at auction than of themselves. I am inevitably reminded of the excruciating conversations I had to endure silently as a child, as my father chatted up the used car salesmen he knew, about how some old wreck at trade-in turned out to be a superbly preserved old Pontiac, once the ashtrays were emptied and the car washed. I simply can not be made to care that in some dim back room in Weisbaden, turning over dusty volumes of leather-bound court-reports, some clever dick turned up a priceless volume on medieval partridge farming. I am happy for the find, I suppose, fascinating no doubt, but really... must go before the ice cream stand closes, hope you understand. 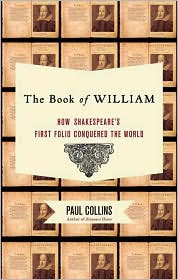 Paul Collins, however, writes neither advice nor celebrations of catalogue prices. What Collins does do is write memoir and history that is delightfully bookish. I've been a fan since his first book, a celebration of wonderful failures, called Banvard's Folly: Thirteen Tales of People Who Didn't Change the World. Any writer with such a healthy respect for, and curiosity about, the eccentricities of the glorious flop is, for me, a kindred spirit. It was his next two books though that won me over completely. Sixpence House: Lost in the Town of Books, about his time in the book trade in Hay-on-Wye, is the perfect antidote to every bookman's fantasy of a little shop in that dreamiest of settings. It is also perhaps the most charming portrait of booksellers since Eighty Four Charring Cross Road, and that is saying more than something. Collins' next book, Not Even Wrong: A Father's Journey into the Lost History of Autism, was a book I read only from affection for its never met author but came quickly to treasure not only as a good recommendation for customers facing similar challenges, but as that rarest of things, an unsentimental yet moving exploration of parenting, that also happens to a be fascinating exploration of a bewildering subject. Collins last book, a brief history of Tom Paine's extraordinary legacy, was among the best books of light intellectual history I'd read in years. Made me read more, by and about, even led me to finally work through a goodly bit of my previously ignored Library of America volume of Paine.

My happiness in finally opening one of the mounting pile of publisher's packages cluttering our entry way, to find a new book by Paul Collins was all but unbounded. I read it off at a tear. The Book of William: How Shakespeare's First Folio Conquered the World, is exactly the right sort of a book about a book. In it, Collins traces not only the history of the creation and influence of the world's most valuable book, but delightfully details his own travels around the world in search of copies, Folios, frauds, and collections, providing unexpected glimpses into the sometimes weird world of Shakespeare scholarship, bibliographers, collectors and librarians. Herein are amusing and moving portraits of Shakespeare's champions down the centuries, from the hack who corrected and defeated the greater genius of Alexander Pope, to a charming trip up the stairs to Samuel Johnson's lonely, and filthy attic office, and on to the man who secretly built the wonder that is The Folger Library and on to a Japanese academic, incidentally a nephew of Akira Kurosawa.

Throughout, Collin's own easy awe of Shakespeare and this greatest of great books stories is communicated with his usual, unpretentious and charming good humor, never more so than when standing in the surprisingly intimate book-auction room at Southeby's, noting the shabby gentility of his fellow book enthusiasts, as compared to the grander atmosphere of the art auctions, or when treated to cup upon politely proffered cup of tea as he works his way through the hierarchy of a great Japanese library to reach, and handle, a great Folio.

Paul Collins is a genuine enthusiast for books, but with the disciplined curiosity of a great popular historian. His errors, such as the likes of me chanced to find -- Hector rather than Hester Piozzi in his notes, and the suggestion that George Birbeck Hill's Johnsonian Miscellanies contain Johnson's Shakespeare criticism, which they don't, are, I suspect errors in editing rather than in either Collins' scholarship or writing. Such minor pedantries on my part should probably have been resisted here, but I mention these just to show off a little, and to point out how little I found otherwise to criticize in the book. After reading this happy new book, I want to read not just Shakespeare again, but Collins. What better recommendation can there be for a new book than that?
Posted by usedbuyer 2.0 at 12:22 PM