Selling it on the Street 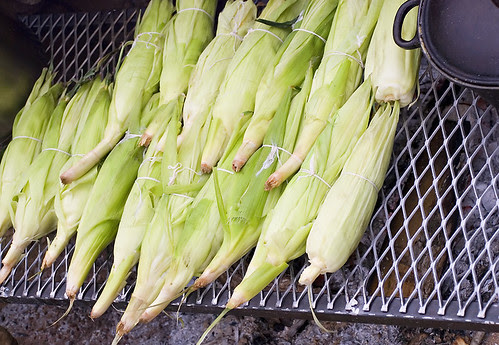 Years ago, in San Francisco, I found a young woman who made and sold hats. She had a booth at the Castro Street Fair. She was named Martha and she called her little business, "Martha Made It." I bought three, four, as many as half a dozen of her little knit caps. That was twenty years ago or more. I still have three of the hats I bought from her, the other having sadly been lost through the years. I've since looked for her and any sign of her business on the Internet, but Martha and her caps would seem to have vanished.

That purchase was one of the few of anything but food that I've ever made at a fair. I do not much like fairs. When I was a child, we had county fairs and Grange fairs and these had all the charm of novelty for their time and place. I discovered that there was money to be made from entering art contests, talent shows and the like and worked at these, going so far as to enlist my friends to act as fronts so that I might enter multiple drawings and paintings, dividing my winnings with the kids whose names I'd used. This brilliant scheme was undone when, at the Mercer County Grange Fair, prizes in real money were given over entirely to useless ribbons. You can not imagine my outrage at the discovery that a blue ribbon was to be my only reward, or my disgust when a friend under whose name I had entered multiple contests seemed thrilled to accept such useless stuff, earned or not. As the whole enterprise was of necessity secret, I could hardly complain. I date my dislike of fairs to that disappointment. But my dislike has grown since, not from disappointed greed, but from a dislike of both crowds and artisan gimcrackery: heavy pots, insipid landscapes, vulgar blown glass, clunky lawn ornaments and the like. There is nothing at this city's street fairs that interests me now but fried dough, in its many varieties, visiting barbecue and roast corn stands, and the passing parade of humanity. That I could watch all day, so long as I was supplied with a sufficient stock of fresh lemonade and frankfurters.

There's nothing to match the first airing of Spring limbs in Seattle on a surprisingly sunny day. The natives hereabouts are a calendrical people, undaunted by actual weather, and when May comes 'round, rain and cold be damned, they dress as if for a day at a Mexican beach. Pink-kneed, bare limbed, and shod in open-toed sandals, the people of Seattle will brave wind-chills, thunder storms, even hail to welcome Persephone back from The Land of the Dead. When we are blessed, as we were this year, with an actual warm day, with sunshine and clear skies, the press of humanity at such events as the just passed University District Street Fair resembles nothing so much as a riot, though a peculiarly respectable, pale sort of riot I'll admit. Blinking and bustling in the sun, the happy crowds wait patiently at every open street crossing, queue politely for overpriced meat on a stick, drink their beer at designated dinning areas, seem seldom to fight, dance or piss in the alleys, instead lining up, seemingly in their hundreds, to use the restrooms at the bookstore.

Now, other than allowing the use of the facilities, the bookstore has never, to my knowledge, taken any active role in the Street Fair. Among the store's employees, the event has taken on an unhappy reputation as a source of naught but chaos, mess and bad sales. Bad tempered babies in strollers crowd the lobby, already done with the whole business by ten in the morning. Ladies unknown to us but once a year have the audacity, at six in the evening, to complain of the state of the restrooms. Frozen custard and the tag-ends of various suspicious things wrapped in wet napkins are abandoned or dropped throughout the sales floor. Our trash cans are left brimming with garbage generated elsewhere. It can be a very trying day to work in the bookstore.

This year though, my coworker K. took it upon herself to bring the bookstore out into the street. For the first time in anyone's memory of the 40 year history of the Street Fair or the more than 100 year history of the bookstore, we set up a table outside and decorated it with books, a few sidelines, and some new T-shirts, produced specifically to promote the bookstore as an independent. The table was staffed by good and patient women who sat in such shade as they could find and greeted such passersby as hesitated long enough to be greeted on their way in to find the restrooms. A few books were in fact actually sold, much to our collective amazement, though that was not really the point. The point was simply to be out there, to remind that press of Spring flesh that they were passing by, in and out of one of the great bookstores in the history of this city.

To further this goal, some coworkers and I spent part of that same day passing out coupons up and down the busy street, good for fifty percent off the purchase of a single used book in the bookstore. K. and others did the same again on Sunday for the second day of the fair. The response to this was extremely encouraging. I have not myself handed out fliers or the like since the far off days of my first political activism in San Francisco. I dislike being approached in this way myself, so it was with some hesitation I undertook to be one of the people distributing these coupons. But it turned out to be a rather wonderful way to spend an hour or two of my day. True, the vast majority of people turned my coupon politely aside, but many, hearing that it was for the bookstore, turned back and took one from me. Time after time I was told how wonderful the bookstore is by people I have never seen in the bookstore in the better than five years I've worked there. Better yet, many of the people who took the coupon later used it to purchase a used book, most buying more than just the one discounted. Many, many of that day's customers expressed surprise and satisfaction in having by this means only just learned that we are in the used books business.

The street fair was then, thanks largely to K., a greater success for us than we might ever have anticipated. Used books owe her special thanks, as few other efforts at promotion seem to have been so immediately successful in increasing the awareness of this newish stock in the bookstore. And I owe her thanks for giving me so good an excuse for strolling through the crowd and gathering more smiles than frowns. There were some handsome sights among the general run of walkers. And the roasted corn was delicious this year.
Posted by usedbuyer 2.0 at 6:21 PM