Murder Not Most Cozy 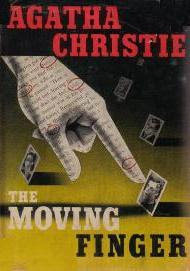 A couple of years ago, we had a whole collection of Agatha Christie come across the Used Books Desk. This was not of itself unusual. When one gets mysteries, and Christie books specially, they tend to come in bunches. This is how mysteries are read generally, at least by real fans and addicts. But the copies that excited my interest were not the usual mass market paperbacks, but rather a whole stack of Christie reissues for a mystery book club, in hardcovers, in handsome thin leather. The books themselves were hardly collectible or rare, most of the titles having been issued as premiums, i.e. the bonus books issued with membership in the book club. But they were attractive little things, and there were titles among them that I'd never read. I priced them quite cheaply and broke up the collection, sending some to every branch already selling used books, thinking someone in each store would thus find a pretty Christie or two. I read three of them myself before I sent them off.

Among the novels I read then for the first time, was the last adventure of Tommy & Tuppence, aka the Partners in Crime. Postern of Fate was the last book Christie wrote, and in it she chose to revisit the couple that had featured in a number of earlier books, a rather silly, glamorous pair that had started out in the twenties as Bright Young Things, solving murders between parties. They had grown up a bit through the years, even taking on espionage, and now here, in the last book, they were a retired couple, in their seventies, and at last moved to a typical Christie village. The crime plot wasn't very strong and resolved itself in the kind hysterical confession I'd tired of long before I'd stopped reading Christie, but I enjoyed that book the best of the three I read then because in it Christie wrote quite convincingly and charmingly of older people, not just her now gray, if still gay, in the older sense, detectives, but also of old people in general, in a home for the aged, not brilliant or self supporting old darlings, but rather more average people, quite real people in a realistic setting for the time. There was something quite moving in reading such a book, knowing that it was written when Christie herself was old.

Recently reading Laura Thompson's excellent biography, Agatha Christie: An English Mystery, was a treat because the biographer shared some of Christie's own sharp humor and her fundamental kindness, treating for instance the whole melodramatic story of Agatha Christie's "disappearance" as what it was; one rather strange and telling episode in a long life, rather than as a deep and mysterious scandal. The whole business was handled with an admirable seriousness, but not made too much of, much as Christie's Miss Marple might have dealt with it herself. The best of Thompson's very good biography though was, for me, her very fair estimation of Christie's gifts , which were considerable if limited, and the consistent sympathy with which Christie's accomplishments were celebrated and her personal life detailed with neither too little nor too much being made of where and how the author's life and work touched. The whole was a balanced, and often funny and touching life, very well told.

Dame Agatha Christie knew what she was about. She was an artist of a restricted range, but extremely clever within it. Rather than write what was not in her power, she practiced what she understood to be her craft, and ended up being better at it than anyone since Arthur Conan Doyle. The tendency now is rather to think that everything she ever wrote was as good as anything else, which isn't at all true, she wrote so much and some of it simply isn't very good, but she got better and better at it and in the process wrote some of the best genre fiction ever. Her books are consistently entertaining, constructed with an astonishing degree of precision and care, uniformly well observed and funny as well as exciting. If none of them is really any better than a thriller, some of them are among the best thrillers ever written.

But then, I'm either preaching to the choir here, or likely to be ignored. Christie, like all great genre writers, seems only to have fans and foes. A coworker who's taste in thrillers and popular fiction is far wider than my own, does not read "cozies." I understand. My own preference has always been for the tougher, American variety of mystery. But Christie, if the Grand Dame of what we now think of as typical English mystery, was not herself much enamored of silly books. Her silliest tend to consistently be her worst. Humor she had, and even wit, but she was not a humorist. She took crime quite seriously and in her best books, she is always respectful of the actual consequences of violence. Her curiosity about crime was seldom morbid, but it was real, and if her settings tended to alternate, with her detectives, between the impossibly self contained worlds of the upper classes and the cozy English village, she quite sensibly understood that neither was exempt from the uglier human emotions and thoughtlessness that lead to criminal actions. If criminality as a way of life did not much interest her, or at least seemed seldom to figure in her fiction, she quite sensibly recognized that she had little or no experience of it from which to draw. Life in a respectable English village she knew first hand, just as she came to know wealth, and academia and the foreign places where she occasionally sent her detectives. If she didn't know murder, she understood the murderous impulse, and being, largely, a rather predictably English lady of a certain class, she understood and wrote about the mysteries in just such people and places as she knew. There's nothing cozy in her evaluation of either humanity or our habit of ruining even the best of what we make. Her resolutions are not always happy, but they have always in them a rueful faith in the fundamental decency of most, if by no means all of us. She seems to have been just such a flawed but admirable person herself as the characters for which she is most justly famous.

I read one of her Poirots when I read those three books end to end. I found his English and his repetitious eccentricities more grating than I remembered. His extraordinary intelligence seems, with rare and wonderful exceptions,to never quite prevent one more corpse being added to the pyre just shy of his solution of the original crime. But still, I enjoyed it.

And now I'm rereading The Moving Finger, one of Christie's own favorites, and by general consensus, perhaps the best of her Miss Marple books. I only started it tonight, and Miss Marple herself has only just come on the scene, but I must say I'm having a wonderful time. A rather awful big girl named Megan said the most innocently wicked thing, for instance, on just page 35:

"I'm not wanted and I can't quite see why. Mummie doesn't like me a bit. I remind her, I think, of my father, who was cruel to her and pretty dreadful from all I can hear. Only mothers can't say they don't want their children and just go away. Or eat them. Cats eat the kittens they don't like. Awfully sensible I think. No waste or mess."

Christie, not a terribly successful parent herself, was clearly not afraid at least to say wickedly right things. Awfully sensible I think. And in this rather perfect little thriller, I have to say, no waste or mess.
Posted by usedbuyer 2.0 at 7:03 PM