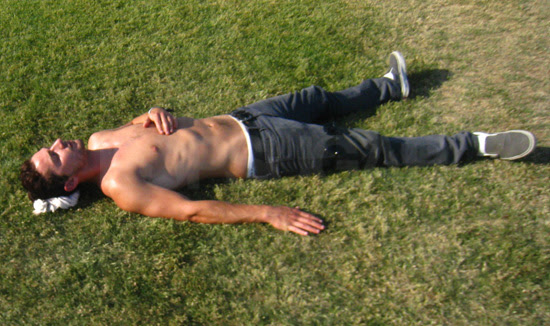 I suspect that the general impression I have given here is of a rather dear, if not precious, conservative leading a pottering, quiet sort of life, lived largely amidst books, usually old books, and that, by preference I remain "ignorant of the existence of anything that is not perfectly proper, placid and pleasant." That's not true. Actually, in my daily life, I'm a rather silly, vulgar sort of person. And I am not immune to the influence of contemporary culture, at least at its most overwhelming. I do get out now and then. It's quite true that I don't listen to pop music, but then I never did. Likewise, with the obvious exception of a few reality shows, I don't much follow the standard television hits. Hit fiction is generally left to age on the shelf before I'm inclined to read it, if then. There are exceptions to everything though. Lady Gaga's idiotic "Poker Face" lodged in my head a while back and would not shake loose. I love the "Jackass" boys so much that I watched Steve-O: Demise and Rise and happily cried a little when he finally went into recovery. Bless 'im. And when a book ceases to be just a popular book and becomes something like the salvation of the trade, why then I feel a professional obligation to at least give it a go over the weekend, so as to have at least some point of reference other than the reviews. I read a good bit of the first Harry Potter and of the first Twilight. Reading the former left me understandably wistful that such a thing hadn't happened when I was eight. J. K. Rowling's adult audience I still find mystifying, but I think I understand better the appeal of her work to the children for whom it was written having read a bit of it for myself. And I've watched the movies as they've come out, though admittedly only when they've made it to the discount movie house. Reading the first of Stephanie Meyer's books, on the other hand, I found just depressing. Her heroine is a dreadful, spineless little thing who might have dropped into the book from some morally instructive, late 19th Century girl's story. I could not understand what Meyer was up to, or explain the appeal of the thing to contemporary female readers of any age. Within a hundred pages of Twilight, I was deeply suspicious of some reactionary romantic agenda. Those suspicions have since been confirmed and explained by the appalling developments in the concluding book in the series and Meyer's own outing as an antifeminist Mormon. Oh dear. How truly awful. (As a bookseller though, I do very much want to thank the Angel Moroni, or whatever supernatural personage might be responsible for Meyer's continued sales. There seems to be no more rational explanation of the phenomenon, so again I say, well done Moroni! Besides, I just love that name, Moroni, don't you?)

Now as to movies, I admit to being not in the least immune to hype. I enjoy blockbusters and event movies, super heroes and action stars, heists and fisticuffs and car chases and aliens and the lot. I think Shia LaBeouf (see above, shirtless,) just adorable and find Daniel Craig irresistibly (right) hot. (Which puts me, rather awkwardly, between the demographic that reads Seventeen Magazine and their moms, in other words, I'm a big ol' faerie.) So, when it comes to the movies -- as opposed to film, don't you know -- I'm all for summer, but in a very gay way. What was surprising this weekend was that dear A. was just as eager as I was myself to see the new "Star Trek" movie. A. does not much care for the science fiction. A very straight friend of his, with whom he speaks on average at least once a week, was likewise very much taken aback when A. told him that we were both eager to see the "reboot" of the franchise this weekend. A.'s friend is something of a "Trekker" and knows A. not to be. Then A. explained himself by telling his friend, "I think that new Spock is adorable!" "Trekker" friend not amused. I, on the other hand, know just what A. means. I too think the new Spock boy is adorable, as is the new Kirk boy, the dear wee fellow playing Chekov, the new Sulu from the pot comedy...

We went and saw the thing in Imax. The hot dogs we had weren't specially good -- the theater was out of mustard -- but the movie was great fun. Not enough torn jerseys, but still. Everyone in the thing was awfully attractive, even the bad guys with the tattooed faces. The action was exciting, the effects were quite alright, the story was embarrassing as always in these things, but dear Simon Pegg was quite funny, even when teamed with a cabbage as a side-kick.

And did I mention everyone being extremely attractive?

I suppose I ought to mention something other than the uniform cuteness of the boys in the cast. Okay. I've always found Bruce Greenwood a damned handsome fellow. He's in this thing too.

The only thing that really bothered me about the movie, other than the suggestion that Tyler Perry will one day hold a position of responsibility in world government, was what always bothers me in these space adventures: the uniform silliness of all civilians on screen. Forget that the alien baddies might just as easily have aimed their giant, and surprising vulnerable to gunfire, crane of destruction at the North Pole rather than The Golden Gate Bridge. What bothers me is that the only response when this sort of thing happens in this sort of movie, and it always does, doesn't it? is a rather embarrassing panic. No one on the ground seems ever to do anything but run rather lazily around, from left to right and then from right to left. No one so much as fires a shotgun, dials 911, or launches a missile.