Dr. Longjohn at the Movies 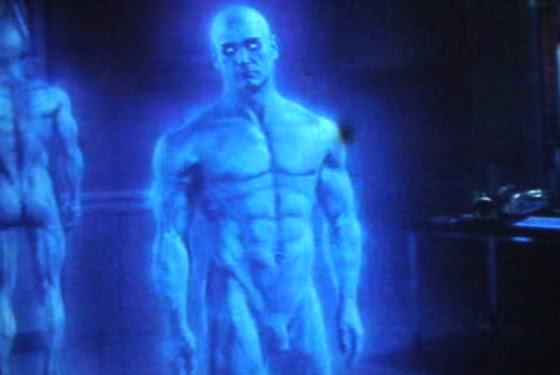 I'm not such a fan of der ubermensch in tights, at least not as literature. As a kid, I read super hero comic books, as I should think did every other American boy of my generation. I enjoyed them, I'm sure, though I had neither the inclination nor the means to be a real fan or collector. (Pity that, because as I understand it, I was then living in the "Silver Age," though I was blissfully unaware of any such thing, and evidently might have made my fortune.) I should think my interest in super heroes waned at about the same time I ceased to enjoy Pixy Stix, wax lips and candy cigarettes. I don't remember. I do remember thinking Christopher Reeves a charming Superman. After that, there was, for me, a bit a lull. But of course by then, I'd discovered magazines with real naked men in them, among other adult distractions. Now of course comic books have become art form and super heroes are again not only box-office, but the protagonists in "novels." Well, well.

No one would go see the "Watchmen" movie with me. I was not surprised that A. was disinterested. He enjoyed the new "Batman" movies. We agreed the second one was really quite extraordinarily good for what it was. He would not however watch "Ironman" even though he likes Robert Downey Jr. just fine. (I enjoyed it.) But I was surprised that no one else I mentioned "Watchmen" to expressed the least interest. Finally, it came to our local second-run movie house, the admirably down-market Admiral Theater, where the popcorn is cheap and plentiful, the theater cavernous and cold and where, on a Monday afternoon, I did indeed watch "Watchmen" quite alone.

I admit I knew nothing of the original comic books until the hype for the movie started up. A year ago, I did a display table for the bookstore on comix, featuring some of the wonderful Fantagraphics collections of classic comic strips, new graphic novels and memoirs, manga and the like. In the bookstore there is a clear distinction made between the "graphic novels," and the history of comix, which live in the Art Section, and super heroes and manga which live upstairs with the Science Fiction/Fantasy books. I asked advice of the expert upstairs about what to bring down for the table-display and the first thing I was handed was Watchmen, created by writer Alan Moore, artist Dave Gibbons, and colorist John Higgins. I admit I'd never so much as looked at the book, though I'd certainly heard of Alan Moore. I'd seen the not very good movies made of his earlier books, From Hell and V for Vendetta, and then read the comic books. I'd also read at least one of his collections of The League of Extraordinary Gentlemen, though I could watch only a few minutes of the exceptionally bad film made of that last. Of all the Alan Moore I'd read before I read Watchmen, his Jack the Ripper story seemed the best, a clever combination of rather hammy agitprop and loopy conspiracy horror. Watchmen, when I finally read it, summarized for me all that was entertaining, and distasteful not just in Moore's writing, but in the whole Super Hero genre. I was glad I'd read it. I enjoyed it. It did however reinforce my established prejudices.

Seeing the movie made from it reminded me what a mess the various plots and subplots had been in the book. I can't imagine anyone who hasn't read the book making the least sense out of the movie, which I understand was the critical consensus on it as well, and may help to explain the movie's failure to become quite the blockbuster it was clearly intended to be. Like Moore's earlier comic books, Watchmen is a portmanteau into which is crammed a great deal of genuine fun, much of it though, it must be said, coming from the illustrators whose surprisingly reverent and nostalgic recreation of older styles of rather boxy, hard-lined drawing and heavy colors becomes almost touching, particularly in the flashbacks to the early days of heroes in saggy-assed uniforms and heroines in cheesecake heels. The multiple story-lines, flash-forwards and flashbacks, and the tongue-in-cheek introduction of the unrelated pirate comic, added some interest to the book, and again, Moore's penchant for juvenile, even rather endearingly clumsy pop satire was fun. Some of the latter survived in the movie, though if anything, made even more muddled-headed than Moore's more complicated original. But what was rather sweetly silly in the original illustration was made insipidly silly when actual actresses had to walk around in Betty Page shoes and a grown man had to try to appear heroic, for instance, dressed as a hooty owl or, most hilariously, if briefly, some poor anonymous soul had to convincingly menace in a blind executioner's hood with a heavy, decorative noose worn 'round his neck like a threadbare fox-fur.

What was worst, in both movie and the comic book, was the never quite admitted absurdity of trying to critique and even spoof, in a rather solemn way, the inherent gangsterism of the genre even as it was being celebrated and memorialized. V for Vendetta was no less confused, but it was more blatantly, and therefore honestly, fantastic; playing out on a grand scale the chimerical transformation wish of the magically empowered geek made vengeful terrorist, the bullied, or in this case actually tortured, arty little fellow with a grudge, untold wealth and an all but indestructible new fantasy body as antifascist provocateur. Watchmen admittedly, in its best subplot, has one character at least, the psychopathic Rorschach, who comes close to the actual outcome of this kind of dangerous daydream. But the rest of the crew, and in particular the ultimate villain of the piece, show the actual intellectual and political poverty of this particular fanboy reverie. Without giving away the supposedly secret identity of this evil genius, or, in my favorite unintentional belly-laugh in the original comic book, sensibly changed into something blander but less giggly in the movie, said genius's plan to shock the world into world peace, let me just say that the failure of the fantasy nerds to mature intellectually and politically beyond a touchingly juvenile, if tedious disaffection is made embarrassingly obvious in the story's goofy Götterdämmerung.

In Moore's original hot mess, the notoriously wacky author of course mixed in an unhealthily nihilistic mysticism, to lend a weight of more ambiguous bullshit to his already heavy load, in the Zen passive, if no less bloody minded figure of the nerd as Tidy Bowl blue God, Dr. Manhattan. In the movie the more Alan-Moorish aspects of this character were left largely, blessedly unarticulated, except in the occasional voice-over from Mars. But the whole movie, for me, went from depressingly silly to something very like honest-to-God, eye-popping, blockbuster entertainment every time we were allowed a glimpse of the good doctor's, which is to say, Billy Crudup's, Big Blue Dick. In the comic book, Dr. Manhattan's occasional full frontal was tastefully rendered in the usual three looped "W." On screen though, the actor added dimension and a real weight to his part, or at least to parts below his waist. My only real regret is that the director did not treat us to a single peep at this guy's goods when he expanded into a giant the size of the Chrysler Building. Now for that, I would have paid full price at the Imax.
Posted by usedbuyer 2.0 at 11:59 PM