Something for the Puter Leat

Talking with dear W. from the Wednesday book group, I was reminded that the reading of serious fiction is not always a part of the intellectual lives of even the brightest people I know. Poor W. is a student and spends her days studying fish and forestry and other such respectable, unfathomable things. She is a brilliant, warm and very funny woman who, along with her equally brilliant, warm and funny partner A., joined the club to have a regular evening out. (One presumably can only spend but so much time reading and reading about trees and fish, and studying Russian at one point as well, by the way, just to give you some idea of the kind of first rate minds I'm talking about here.) I am awfully grateful they decided to make the club their point of contact with community. Feels like I've known them for years. Between them, they make me laugh so regularly and hard I wonder we haven't giggled ourselves into asthmatic fits.

W. does not have the habit of literary novels, so the book club is something of a departure for her. It can't have been an easy thing, making the time for and investing in novels by the likes of Gore Vidal and Patricia Highsmith for a reader not much accustomed to such. What W. told me that she does read -- or did before she decided to take a course load that would tax the endurance of a bus load of Jeopardy nerds -- is dystopian Science Fiction. She was rather apologetic as she admitted this. What for? True, I'm a snob, but into every genre a masterpiece or two must fall, no?

I told W. as much. Much of what I think of as dystopian fiction is older than the SF genre, so the dystopian SF I remember tends to be from movies. (Where the future comes in only two outfits: the distressed leather ala "Mad Max" or unitards, hopefully filled with dreamy Michael York, as in "Logan's Run.")

Thinking about the best of same, at least as I remember it from the days when I still read SF, I remembered two. A Canticle for Leibowitz, by Walter M. Miller, Jr., otherwise unknown, at least to me, is a wonderfully caustic, comic firestorm of a book. After the usual nuclear devastation (published in 1961, this sort of thing was a matter of course,) society rebuilds along medieval lines, with an order of monks preserving not so much the best of the past, as those bits of it they can find in the dirt of the American southwest. These include the writings and relics of the blessed Saint Isaac Leibowitz. The flight of this reconstituted society ever forward toward the same sorry ends accelerates as the novel progresses and the effect is dizzyingly dazzling. 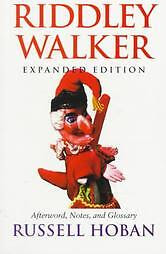 My other favorite I would likewise rate with the best books of the second half of the late century,Riddley Walker, by Russell Hoban. Again the world has blown itself to bits and now, centuries later, barbarism has held sway for some time, with religion and government again one and the same. Here the amazing power of the book, rather as is Anthony Burgess' A Clockwork Orange, is in the invented language -- a twisted, post-apocalyptic, yet liltingly Kentish version of English -- in which the book is narrated. Riddley is a bright and resourceful boy and his is a voice both hilarious and powerfully moving. The strange new English he uses is a truly remarkable invention, and the novel is a wonder.

I wonder if other, regular readers of dystopian fiction -- a category of person it would not have occurred to me existed until W. described herself so -- have no issue reading the end of the world, dark barbarism everywhere, civilization and other comforting abstractions blown, but, like W., might be squeamish of actual violence on a human scale? W. refuses to watch violent movies, for example, as these give her vivid and horrible nightmares. She likewise expressed an entirely sincere horror of the Cormac McCarthy she'd read other than The Road. So perhaps dystopia isn't quite the place she actually visits regularly. Perhaps, with her ebullience and brightness, she sails through these dark places, secure in the knowledge that so long as there are such as her partner and herself moving in the world, the actual chances that it will all end are fractionally less likely. I like to think so certainly. Now to see if I can convince her, should she ever again have the time to read more than one novel a month, to read my favorites. It's what friends do; take you with them through the fun-house.
Posted by usedbuyer 2.0 at 2:15 AM