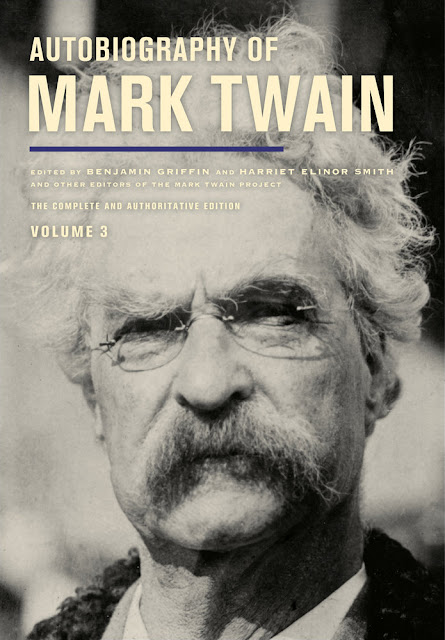 And so the last ungainly bale of Mark Twain's autobiography has at last been none-too-gently offloaded by the University of California Press and the Mark Twain Project.  Unlike the first, back in 2010, there's been blessed little notice of this, the final shipment.  Hard now to remember the fanfare that greeted the project's inaugural volume, which quickly became one of that holiday season's most unlikely bestsellers.  To date, at the bookstore where I work we've sold one copy and that to me.  Don't know that we will move the other four copies ordered any time soon, and that's a real shame.

Autobiography of Mark Twain: The Complete and Authoritative Edition, Volume 3, edited by Benjamin Griffin, Harriet Elinor Smith and Co. is every inch as intimidating as either of the earlier two, which is of course the blessing and the curse of the whole enterprise.  Unlike earlier editors like Charlers Neider and Bernard DeVoto, the present Project crew determined to take the elderly Twain at his word.  Early on in the dictation of these pages, Twain announced that he intended a new kind of autobiography; one not restrained by either chronology or narrative convention.  Whatever he may or may not have intended to do, these three volumes have made painfully clear that what the old boy did was talk, and talk, and talk.  Sometimes he talks most entertainingly, as one might expect from one of the supreme talkers in our literature.  Often as not though, not -- at least when the dull stuff is  measured by weight.  Still, now, thanks to this "authoritative" edition, no one can say he hasn't had it all out.

Bernard DeVoto spent years among Twain's unpublished papers and produced various worthy and still readable volumes, none of which laid claim to the title of Twain's "Autobiography." Neider, confronted with the same hay-mow of material, attempted to shape the autobiographical stuff into some kind of recognizable story.  His book remains a thoroughly readable abridgement, if by no means what Twain seems to have had in mind. Neider's is a book to which I have returned many times, always with pleasure and great respect for his herculean effort.  Twain's editors then, down the decades, may be not only the only people to have read all of Twain's Autobiography, but the only people ever likely to.  At least now, those of us inclined to browse about may do so just as we please.  Here at last we have the whole of Twain's original, tidied, but hardly "edited" in any sense that those earlier gents might recognize. (Even as to the bare minimum of useful footnotes, there would seem to have been no room left in this new version for anything but Twain's original text, various supplemental additions ((!)) and an index, in other words, more of more.)

Just by way of contrast, Oxford University Press last year released an authoritative text of Anthony Trollope's autobiography, at 328 pages, including a new introduction, selections from some biographical essays and his biography of Thackeray, an appendix of "Passages Omitted from An Autobiography," and a section of explanatory notes.  The comparison is not entirely fair.  Trollope's book is a notoriously tight and workmanlike effort and Trollope a much less expansive character than Twain.  I mention Trollope's book both as a model of what Twain evidently did not choose to write, and as an example of what an academic press can do to enhance such a book for the common reader.  But then, I've already read An Autobiography by Anthony Trollope and already own at least two editions.  And now it seems I also own all three giant volumes of Twain's.

I can't say I regret the opportunity.  In the 700+ pages of this third and concluding volume there are stories already familiar to me from earlier biographies and from more finished versions of some of this material in previously published essays and journalism.  Even within the text of this edition there are repetitions, sometimes within pages of one another, sometimes from volume to volume -- though all of these, it must be said, are the fault of the author and not his editors, as so I suppose we must call them.  There's much that is boring, a considerable part that is devoted to subjects and personal relationships of no great interest, I should think, to even the man's biographers.  That said, there is still much to delight the more casual reader willing to browse around.  This last volume being particularly rich in Twain's reading of the newspapers and his ongoing amusement at the sometimes ridiculous exploits of then President Theodore Roosevelt.  There's a brief and very funny three day stretch describing  the "overgrown boy" from the White House rather haplessly hunting bear in Louisiana.  Twain side very much with the bear.  Finally he suggests that the President's trophy was just as likely a cow, considering the unreliability of the witnesses and the newspapers reporting the event.

A perfectly good book might have been made -- and might still be made --from just Twain's reading of the newspapers.  DeVoto did something very like in his books on Twain, after all: Mark Twain's America, Mark Twain in Eruption, etc.

Now that the last volume of this new edition is out, it seems safe to conclude that no matter what the old man intended when he took the project up of dictating his autobiography, what he ended up with was little more that a barn full of talk, baled and stacked and left, at last, to moulder.  It seems clear now that what he was doing was neither writing nor even dictating a book, but passing the time until Halley's Comet came back.  (He famously said that having been born when it first appeared in 1835, he expected to go out with it when it returned in 1910, and he did.)  It does no good to pretend that all of this  talking amounted to an autobiography at all, but that doesn't mean that the common reader has any reason to regret the Mark Twain Project's effort to see it all in print and available.  Scholars will no doubt benefit from the effort, but so will anyone willing to treat the result less like a book -- which it simply isn't -- and more like an opportunity to access material otherwise unavailable for generations heretofore.  If then the autobiography is a failure, so be it.  Twain failed to shape the material into anything much, and his latest editors can't imagine that they have produced anything more than a definitive text from which, presumably books might yet be made, or remade.  Whatever these three huge volumes actually are, and however few the readers they are likely to find, at least they exist.

If the whole thing has proved hardly worth the wait, at least the freight's been paid, and I for one am grateful to have the result, even if I can't imagine we'll be selling any of the damned things come Christmas this year.