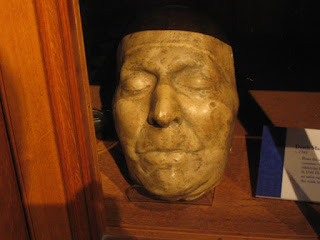 From Swift: The Man, His Works, and the Age, Volume III, Dean Swift, by Irvin Ehrenpreis

"One day in mid-march, as Swift sat in his chair, he reached towards a knife.  But Mrs. Ridgeway moved it away from him.  He shrugged his shoulders, rocked himself, and said, 'I am what I am, I am what I am.'  Some minutes later he repeated the words twice or three times.  About a fortnight afterwards, he tried to speak to his servant, whom he sometimes called by name.  Not finding words to tell what he meant, he showed some uneasiness and said, 'I am a fool' -- his last recorded words."

From Chapter Thirteen, He's Just Alive
Posted by usedbuyer 2.0 at 12:38 AM