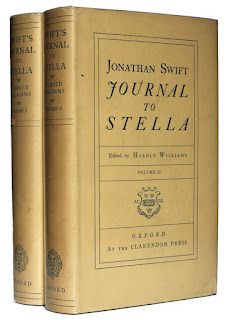 From Journal to Stella, by Jonathan Swift

"I was this morning to see Mrs. Barton; I love her better than any body here, and see her seldom.  Why really now, so it often happens in the world, that where one loves a body best -- pshah, pshah, you are so silly with your moral observations. Well, but she told me a very good story.  An old gentlewoman died here two months ago, and left in her will, to have eight men and eight maids bearers, who should have two guineas apiece, ten guineas to the parson for a sermon, and two guineas to the clerk.  But bearers, parson and clerk must be all true virgins; and not to be admitted oil they took their oaths of virginity: so the poor woman lies still unburied, and so must do till the general resurrection."