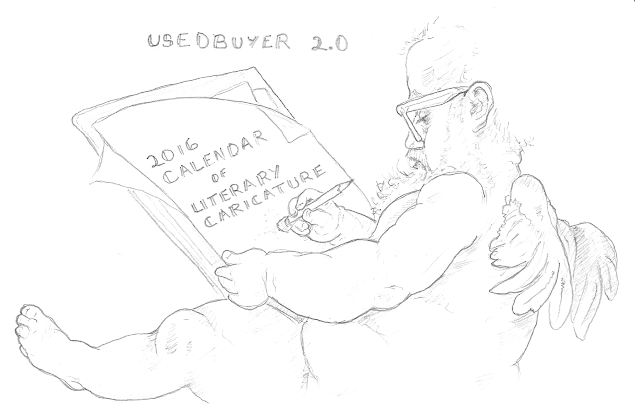 And here we are again!  Yes, it is that time of year; the leaves are being blown from the trees, the temperature is dropping, I'm already worried about Christmas, and, yes, the Usedbuyer2.0 2016 Calendar of Literary Caricatures has arrived at the bookstore where I work.

The signs were not auspicious this time around.  The place I'd taken my sketches every year to have the calendars printed went out of business.  Panic. At the old place they knew me already.  They were used to me.  I was used to them.  What then to do?  Luckily, a new copy store recently opened just two doors up the street from the bookstore.  Going in I was nervous to explain why I wanted a calendar made of pencil sketches of (sometimes) obscure literary personalities -- and with me as a very naked li' Puto for the cover yet. I would need ato print a bunch, quickly, and hopefully at a sufficiently low price per unit as to be able to sell the things at an unembarrassing price. 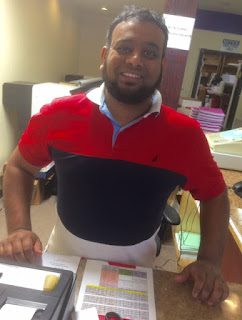 I was lucky.  Amer at EZ Copy N Print saved me.  Very nice fellow.  I handed him the thumb-drive with the pictures, he said "No problem," and we were off to the races.  In fact, Amer was a sweetheart; suggesting better paper-stock, checking the results with me all along the way, charging me the same price as the old place, and he was fast.  Couldn't have asked for a a better experience.

Took a few days to get the calendars into the bookstore's inventory and tagged, etc., but finally I am again for sale.

This year's number is, if anything, perhaps even less likely to fly off the counter than it's predecessors.  There are more unlikely subjects than before (Charles Augustin Sainte-Beuve, anybody?  Maria Edgeworth?  Anybody?  Anybody?) There is also at least one picture that will be a bit of a puzzler for most as my Elizabeth Taylor is not the Elizabeth Taylor but rather the delightful English lady novelist (1912 - 1975).  She's a particular favorite of mine, and too little known in the US, despite having one of her books, Mrs. Palfrey at the Claremont made into quite a good movie in 1999, and another, The Real Life of Angel Deverell adapted by French director Francois Ozon in 2007 as Angel.  I love her.  I have no illusions of influence, so it's not like her inclusion in the calendar will bring her surging back into print, but there are at least a couple of her titles still available, A View of the Harbour, and You'll Enjoy It When You Get There: The Stories of Elizabeth Taylor, both recently reissued by NYRB, bless 'em. 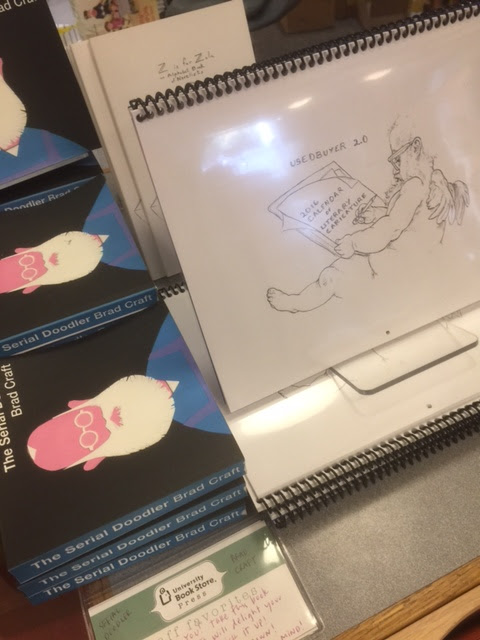 Not every sketch in the thing is of some long dead author.  Here, for example, the last American writer to win the Nobel Prize for Literature: 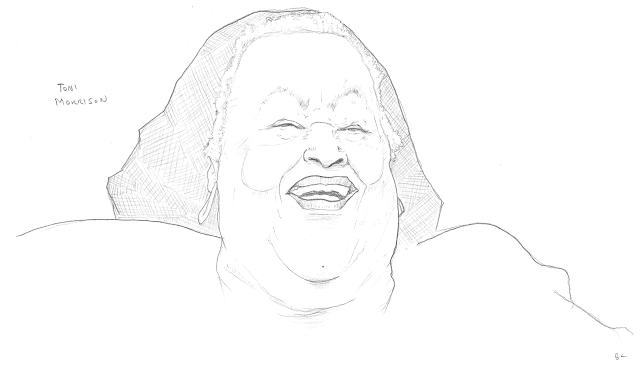