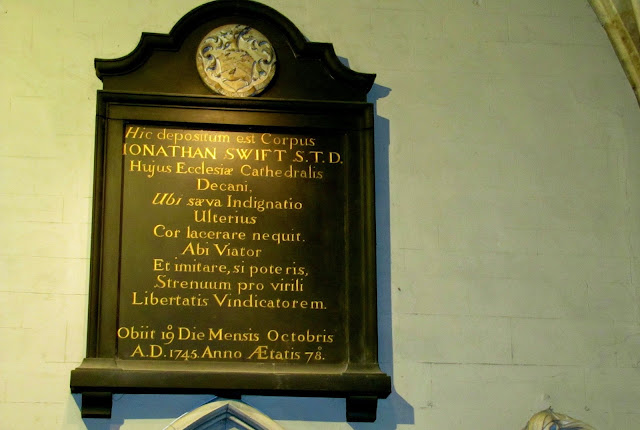 Jonathan Swift wrote his own epitaph -- not so unusually as it might seem to the modern reader -- and in Latin.  The text, in translation reads:


Here lies the body of Jonathan Swift, Doctor of Divinity and Dean of this Cathedral,
Where savage indignation can no longer lacerate his heart;
Go traveller and imitate if you can, this dedicated and earnest champion of liberty
He died on the 19th October 1745, aged 78 years

Below and to the right of the plaque on which this is inscribed is a bust considered to be a specially good likeness, though made some considerable time after the subject's death.  While I myself have never had the opportunity to visit Dublin, I have studied that face and like it far the best of the portraits I've seen.  It is a kind face, and the only likeness that to me suggests something of both the writer's great humanity and his melancholy.  (None of the portraits betray so much as a hint of a smile, let alone his humor.) 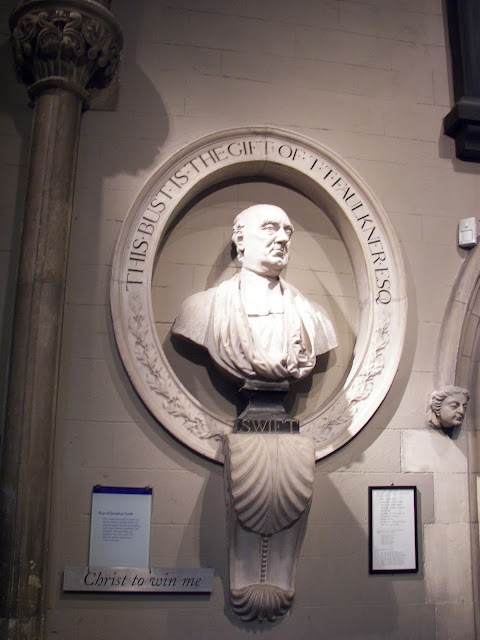 The great Dean of St. Patrick's Cathedral, Dublin is memorialized variously in his church, perhaps most famously in the brass plaque that marks the location of his actual grave.  Next to it, is the plaque for Esther Johnson, his "Stella."  (She was his dearest companion; quite possibly either his mistress, his secretly married wife, or his niece, or so at least one just plausible theory goes.  The evidence actually supports none of these speculations to the point of proof.  We know they loved one another.  That's all we actually know or are likely to ever know.) Most curiously, there is a cast of Swift's skull, taken when his body, and Miss Johnson's, were moved after their tomb was damaged by a flood.  Their caskets were opened and Swift's skull was examined "scientifically" by a crack team of Victorian medical men and phrenologists.  That last flummery led to the laughable assertion that the Dean's "organs of wit" were notably undeveloped.  So much for the phrenologists.  (An interesting historical note: among the medical men was the eminent Dr. Wilde, father of Oscar.)  Eventually, Swift's and Stella's bones were reinterred, this time together, and their grave sealed and covered with concrete, as I remember it. 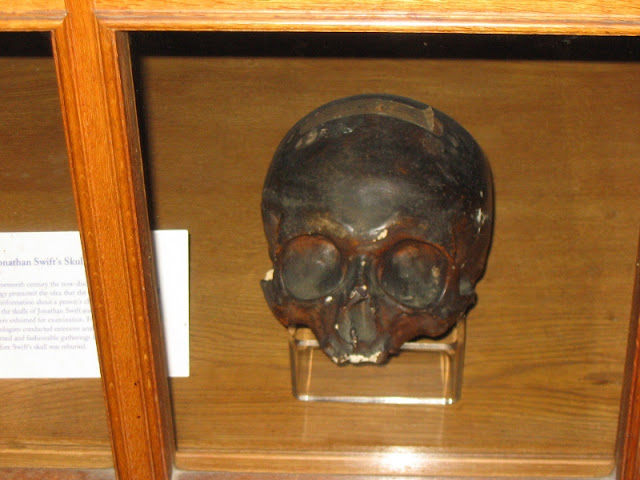 None of these however speaks to me so eloquently as two other memorials, not to the Dean but raised by him.  The first is a large, marble stone marking the final resting place of Frederick Schomberg, First Duke of Schomberg, (1615 - 1690), Marshall of France, etc., and the great Protestant hero of the Battle of the Boyne.  It is not his military career that concerns us here, but rather the story of his memorial.

In 1729 Dean Swift of Saint Patrick's Cathedral, Dublin took up the task of writing a series of hectoring letters to various grand persons, reminding them of their duty to their forebears.  Swift needed money.  Various monuments within the Cathedral has fallen into disrepair, while others among the illustrious dead buried there lacked any proper markers at all.  Among the latter was the great General Schomberg, whose granddaughter, the Countess of Holderness, had already failed to respond to any earlier letter on the subject from the Dean.  Swift, who had known the lady for nearly twenty years, wrote to the Countess a second time, asking her to at least put up a "plain marble monument."  Again, Swift's request was ignored.  Incensed, he communicated his displeasure, threatening that if she would not comply with his request, the Dean and Chapter would do so themselves and that she would not much like the result.  In 1731, that is exactly what happened. 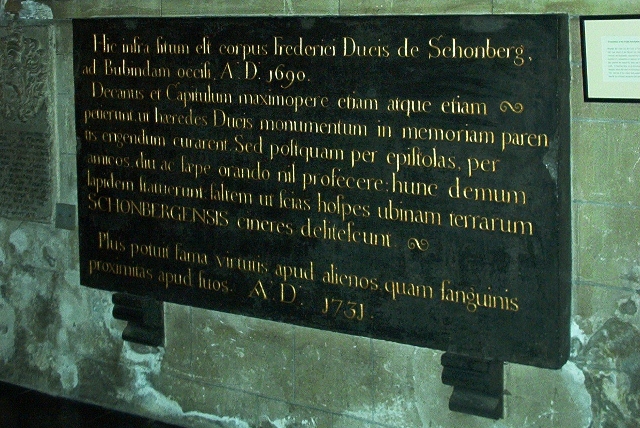 Swift wrote the text, which in Latin reads:

And here, the English translation:

Here below is placed the body of Frederick, Duke of Schomberg, killed at the Boyne, A.D. 1690. The dean and the chapter fervently sought, again and again, that the heirs of the Duke see to the erection of a monument in memory of (their) parent. But, after asking for a long time and often, through letters, through friends, they accomplished nothing; finally they set up this stone; so that at least, visitor, you might know where in the world the ashes of Schomberg are concealed. The fame of his valor had more influence among strangers than the relationships of blood did among his own (family). A.D. 1731

Whatever we might now make of Schomberg, his granddaughter, or the resulting controversy, here is Swift as we know him still; acerbic, ruthless, brave and, in his indignation, hard as the stone he caused to be put up in his Cathedral for all to see.  I think the whole thing admirably done.

However, the picture is incomplete.  It is another monument raised by Swift in his Cathedral that tells not so much a different story as another side of the man.  Nearly a decade earlier, Swift suffered a very different loss.  He wrote to a friend, "I have the best servant in the world dying in the house, which quite disconcerts me.  He was the first good one I have had, and I am sure will be the last.  I know few greater losses in life."

As Irvin Ehrenpreis -- from whose exhaustive biography I take these stories -- goes on to say, "On a modern sensibility such words start no deep vibration, but Swift behaved himself remarkably."  According to Swift's great biographer, The Dean "bestowed a gentleman's funeral" on his servant.  A generous and unusual gesture it seems for the times.  More, Swift, who called his man his friend, put up a memorial to him in Saint Patrick's, right there amidst the Lords, Ladies, Deans, Bishops and heroes. 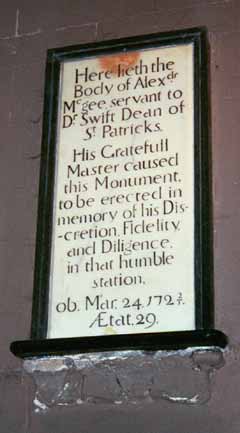 Here leith the body of Alexander McGee, servant of Dr Swift, Dean of St. Patrick's.  His grateful friend and master caused this monument to be erected in memory of his discretion, fidelity, and diligence in that humble station.

A snobbish friend persuaded Swift to omit the words, "friend and", but even so, it is an extraordinary thing to see in such a place, I should think.

It is telling of the man who put it there as well.  In both of these memorials we find Swift the Irish patriot; the author of the Drapier's Letters and A Modest Proposal -- that last perhaps the greatest satire in the language -- both but two examples of his glorious indignation and cutting eloquence in defense of the common people against the powerful.  In the tablet he put up to his servant, Alexander McGee, we get a glimpse also of Swift's great loyalty, affection and respect for those he loved in any station in life.  That is something for which the great satirist gets too little credit.  He was a good master.  He could be a very good friend indeed.   He loved and was loved and respected in return.  He was a good man. Yet, Swift is responsible for not being thought a very nice one.  It was Swift who made his own reputation and he who defended it, sometimes to his detriment, even as he denied authorship of much that made him.  He had a horror of being thought less than what he was; in genius, dignity or station.  He was proud and prickly and terribly sensitive to slights, real or perceived. He was an angry man.  His earliest biographers did not have to exaggerate much to make him terrifying.

What I've learned from reading Ehrenpreis is that Jonathan Swift was not so much a man of contradictions -- that tiresome cliche -- but rather a man of parts. No one who was always furious could have been such a comic genius nor have made so many friends.   He fashioned the masks through which he spoke, usually in the person of characters other than his own: a plain Anglican clergyman, as Lemuel Gulliver, the Drapier, Isaac Bickerstaff. As a political writer in an age notorious for the prosecution of writers and publishers (i.e. "booksellers" as they were called then,) he had cause to be careful not to attach his name to the things he wrote, but he also enjoyed the ruse, and the seeming contradiction of being both the Dean of Saint Patrick's and the author of Gulliver's Travels. It's important to remind ourselves, reading Swift or about him that he could always appreciate the joke, however bitterly he made it. The good he did he often did in secret, but resented not being promoted or rewarded for it -- even as he complained, not always sincerely, and to anyone who would listen of being ill-used.  In fact, he insisted his life long that he never had the recognition he deserved, even when he had it. As they rang the bells to announce to the whole town that the great Dean had come back to Dublin, he described himself as bitterly disappointed not to still be in England!  He claimed to despise Ireland and the Irish, but was vituperous in his country's defense. In some of his most partisan and bitter writing, he feigned indifference or impartiality as a rhetorical devise, but few fiercer, or funnier men ever lived.  He loved the company of his friends, famous and powerful and otherwise, the company of intelligent women and of the best writers of his day; Temple, Gay, Pope.  He entertained and amused them all and they loved him.  He dismissed his relations as useless, yet supported and promoted them as well.  He was nakedly ambitious, but as often undone in his ambitions by loyalty and honesty as he was by insincerity or obvious and obsequious flattery.  He laughed at his enemies until he broke them, but laughed at himself until, sadly he drifted loose of himself and disease and senility overtook him, as he himself had predicted it would.  Besides his own epitaph in Latin, he also wrote, in one of his greatest poems, his own obituary, On the Death of Doctor Swift.  It is a remarkable performance and more like it's author than anything that's been written since. No monster ever wrote such a poem.

He was capable of much and made much of the talents he had, but was never satisfied with either the results of his labors or his rewards.  He failed, and he laughed at his failure, laughed at the frailty of man, and condemned his failures, relished life and ruthlessly revelled in the gross fragility of physical existence.  These things are not contradictions in a man of Swift's character, so much as they simply are his character.  It is worth the walk through the length of St. Patrick's, Dublin, through the biographies by Irvin Ehrenpreis and Victoria Glendenning and Leo Damrosch, through the essays and the letters and the Journal to Stella, through the Sermons and Lilliput, Brobdingnag, Laputa, Balnibarbi, Luggnagg, Glubbdubdrib, and Japan, most supremely worth the trip to the Country of the Houyhnhnms and back to land of one's fellow Yahoos, just to have the company of the great and good Doctor Swift, Dean of St. Patrick's.