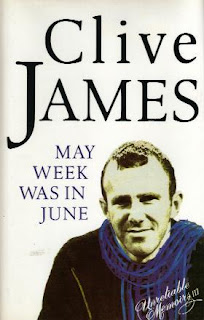 From May Week Was in June, by Clive James

FOR THE FIRST HOUR

"For the first hour I was the life and soul of the party, in my opinion.  My conjectures as to which bits of the wild boar were concealed by the thick gravy were widely received as brilliantly original after Francoise had translated them.  Then I got sick.  Bee venom and wild boar had done something to each other that a gallon of chianti couldn't fix."