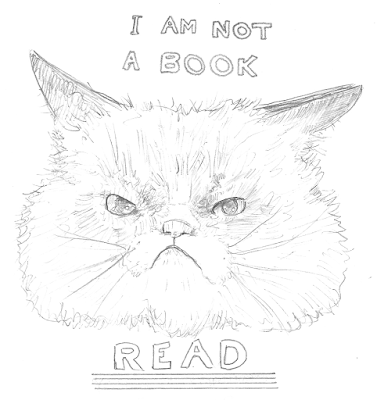 Tonight, at the bookstore where I work, we are hosting a "book signing" by a cat.  That's right, a cat.  That one, from the Internet.  It is in fact her third book.  Friends, via social media are already asking me if I plan to attend and or have my picture taken with the famous feline.  As she would say herself to such a question, "No."

This does not mean that I begrudge her her fame, or the bookstore it's event.  Neither do I mean to suggest anything untoward about her owner, her publishers, her fans, or the Internet that made her famous.  It's a funny cat.  I laughed.  Further, tonight's event has not displaced some more serious writer from the use of the hall.  We are in fact hosting no fewer than four other book signings tonight in other venues.

We've done this sort of thing before.  Last year, we had the dog who sits on various things and has her picture taken.  That went very well for us, despite said dog roaming the bookstore unaccompanied for an hour or more before, during and after.  We've certainly had our fair share of events featuring other  Internet celebrities, four-footed and two, at least as blissfully unaware of the occasion as that dog.  (To say nothing here of the infamous Courtney Love signing of a few years back.)

Finally, the crowd this sort of thing draws is invariably happy, polite, and cooperative with staff, something that can not be said, for example, of everyone afforded the opportunity of meeting a former President of the United States.

It is however my anticipation of tonight's crowd, and specifically what they will say, that makes me peevish.  (Happily, my shift will end before the event gets properly going.  By the luck of regular scheduling, I will be spared much and am grateful.)  Now, however happy these people will be to be at the bookstore for this event, however well-behaved and orderly, the vast majority of them, I'm sure, will be people we have never seen before and are unlikely to see again -- at least and until the next time we manage to book, say, "Pizza Rat" or Cary Elwes, or some other nominally famous "personality."  In other words, the fact that they are coming to a bookstore will likely mean very little to their enjoyment of the occasion.  Might as well be a "signing" in a Costco or a circus-tent.  Doubtlessly, they will appreciate that the bathrooms are clean and that we offer validation for their parking, but what of books and bookstores proper?

Well, I can tell you what they will say.  I've heard it too often not to anticipate the conversation:

And that will be the moment I will try not to throw an actual book -- a nice thick one, like Jaume Cabre's Confessions -- straight at their harmless little heads.  Most people, it seems, are not so impatient at their own ignorance as to actually do anything about it.  Instead, even when surrounded by the evidence of all they might do, learn, read, -- while standing in a long line to have their picture taken with a cat, for example -- that abstract yet popular villain, time, will be blamed for not putting out a hand to touch salvation.

It drives me mad.

In a bookstore, any bookstore, but specially a great bookstore like the one in which I work, to not see the possibilities from the minute the door opens is both mystifying to me and deeply discouraging.  To be in a bookstore, for whatever reason, and to not open a single book, glance at a display, read so much as a dust-jacket...

What the Hell is wrong with people?!

So, here's the thing, if you get in line at a bookstore to have your photograph taken with a famous cat, or football player, or a dog that sits on things, or an actor whose last memorable film role was in 1987, or a rock star whose last hit came long before his latest grandchild, welcome.  We're glad you could make it.  It's a pleasure to have you at the bookstore, honest.  If the only book you buy is the one that cat is "signing," that's just fine by us.  Thanks for coming out.  Hope you had a great time. If, however that is the only book you will actually be buying for the foreseeable future, and if you cannot actually remember the last time you "had the time" to read a book, all I would ask is that you keep that sort of thing to yourself while you're actually standing in a fucking bookstore for two hours and not looking at books.  Once you've got your selfie with the cat, I'll be happy to validate your two hours of parking.  We look forward to seeing you again -- you know, if we book a fainting goat or something.