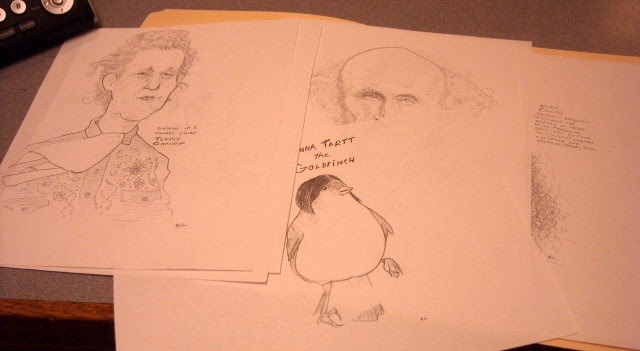 It is that time again, or rather, it's past time, but here we are.  I'm always meaning to do things.  This is a thing I actually enjoy, so one might think I'd do it in a more timely fashion than not, but no. Well, just today it's done.   I've dropped off the pictures at Ave. Copy to have my annual calendar made, and I've approved the prototype, so now there's naught to do but wait for the printing, and the bill.

In the same spirit of belated industry, I finally went downstairs in the bookstore where I work and bought myself a proper "archival box" in which to store my caricatures.  Something I've meant to do for ages.  Heretofore all my pictures and doodles and assorted whatnot have all ended up in great messy piles, in and out of manila-envelopes and folders, all over my desk at home.  I've never made the least effort to organize the stuff; keeping them in no order at all, never separating the wheat from the chaff, as it were, losing some, no doubt, and letting others mingle indiscriminately with unpaid bills and forgotten notes about movies we should rent and phone-numbers I should put in my address-book.

So, the other night, I sat on the floor of my office at home, a great heap of unsorted paper in my lap, and began sifting pictures into my new, black box.  There were some very old pictures indeed, near the bottom of the haymow, but most were indeed drawings I've done for this blog.  I sorted by size -- putting the doodles on scrap-paper to one side, and putting the caricatures into the box.  (And handful of these were indeed so unsuccessful, and so painful to see again that I made a third pile for the shredder.  Most liberating.)  Still quite a tidy collection, by the time I'd finished. 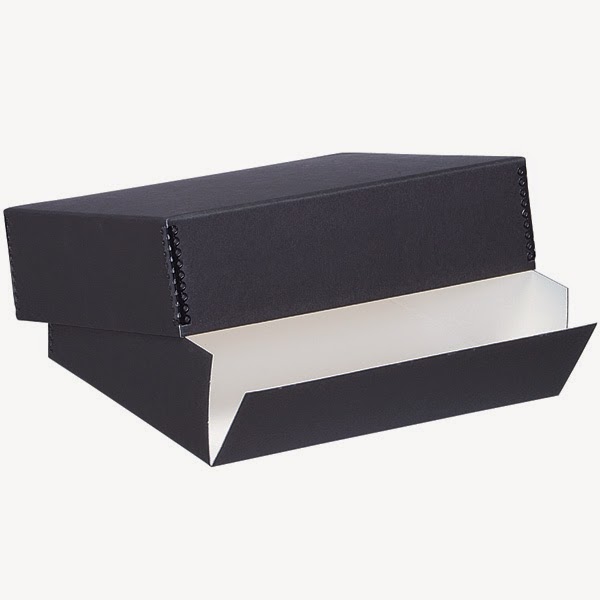 I even found a caricature of the great Temple Grandin that I'd particularly liked, a picture I had intended to include in my calendar last year or the year before, but had been unable to locate.  Most satisfy to able to put it in this year's edition.

(As it turns out, I will need to buy a second box, just for the doodles, which tend to be on much smaller squares that would unbalance a larger, more uniform stack of typing paper-- my preferred medium for the fine work.  Ahem.  Seems I've used up a lot of scratch paper, indeed so a new box for the doodles too.)

In the process of sorting I arrived at perhaps two dozen pictures to consider for my calendar this year, not counting the Temple Grandin.  Of these, I decided to exclude anyone so obscure as to require more explanation than would be possible in a wall-calendar (Holbrook Jackson, Sadakichi Hartmann,) and anyone appearing under a pseudonym ("Robert Galbraith," "Oolon Culluphid.")  A couple of last minute substitutions for more balance between the sexes, and I'd found the mix I liked. 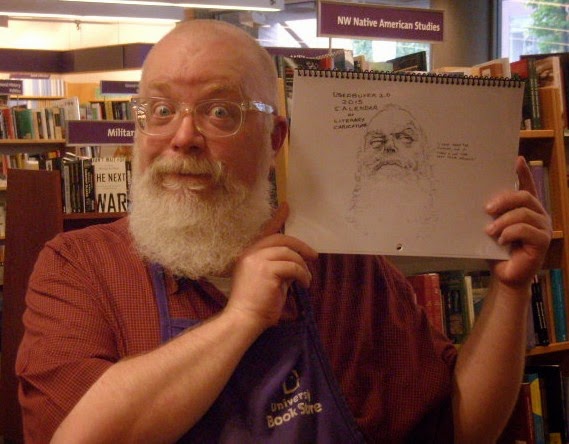 This year's cover will feature the traditional self-portrait, though this one seems a bit darker than usual, but then it was taken from a photograph illustrating the ill-effects of a long head-cold.  (Shown to a coworker, she remarked that I looked "more dignified than usual," which was both flattering in  one way and cutting in another, no?)

I've decided to reduce both the print-run and the number I intend to mail out to friends and family this year.  I can always have more made, should the demand demand.  There will be fewer for sale at the bookstore so as to avoid last year's embarrassment of seeing myself marked down in bulk come January and a few last remnants of glory left to circulate hopelessly in a discount bin marked "90% Off!  Last Chance!" until I bought them myself, just to see them gone.  Humbling indeed.  As for my own copies, I'm afraid I went a bit mad last year and papered the far corners of the Earth with unasked-for calendars, spending more on shipping ultimately than I had in making the damned things.  (I love everyone, honest, but enough already.)  Let's just see how the sales go in December, shall we?

Meanwhile, my archive if you will, begins to look a serious and most sober business with everything stowed in waxed-cardboard and ready for the scholarship of future generations (or the same incinerator into which my heirs are instructed already to pitch my earthly remains.)  I can't imagine anyone making much of a fuss over my pictures when I'm gone, but meanwhile it will be nice to finally have everything in some kind of order rather than heaped under the day-bed.

Perhaps I will someday invite some comely undergraduate back to my den to show him my "etchings."  "Have some madeira, my dear, I have a small cask of it here..."

And at least this year's collection has come to something already, if just another calendar, you know, like I gave you last year.
Posted by usedbuyer 2.0 at 8:47 AM