The One in the Middle 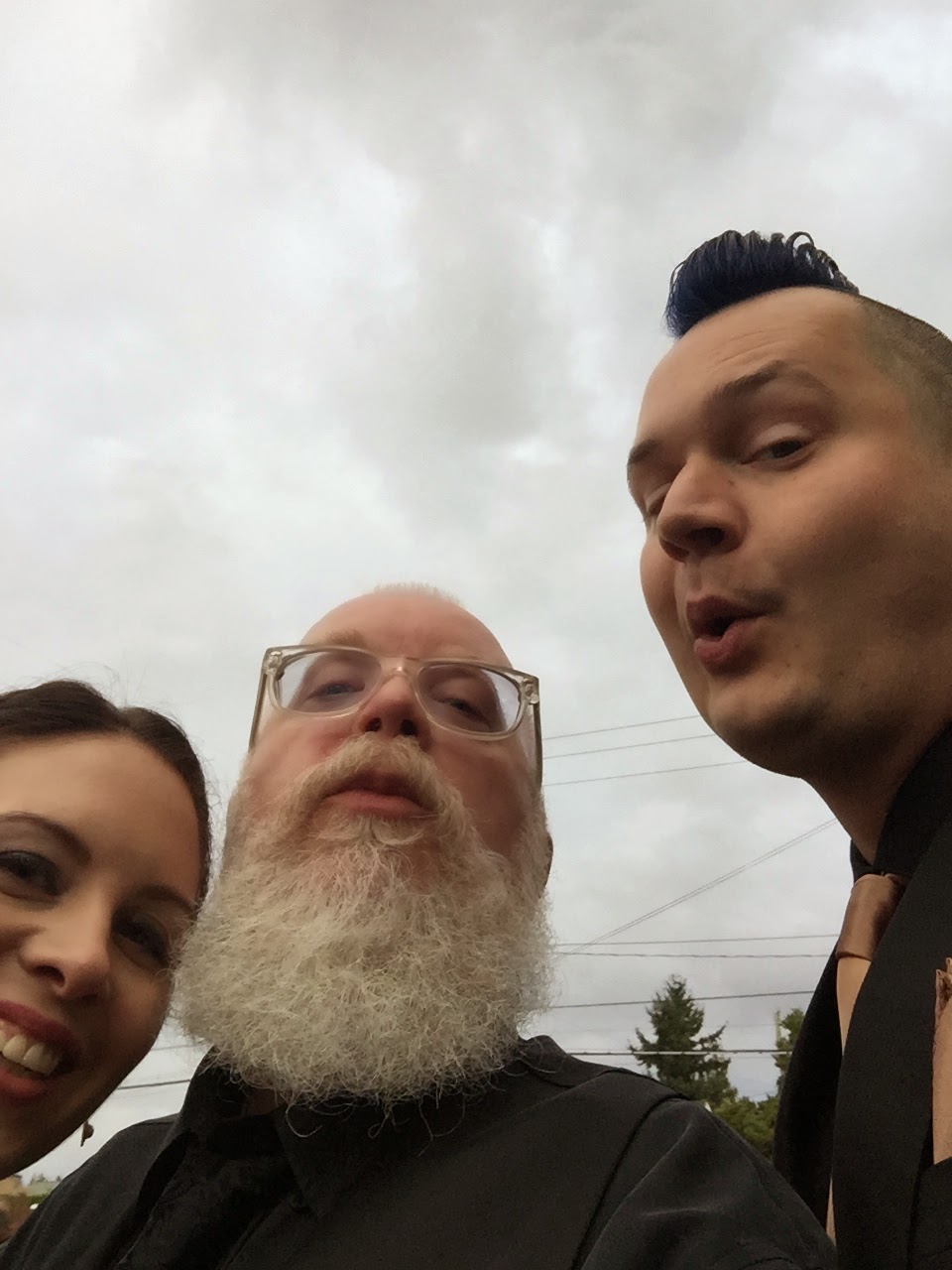 I'm the one in the middle.  That's the simplest explanation when people ask what it means to be an officiant.  There's a little more to it than that, of course.

I'm not a priest, not a preacher, not a minister in any sense save insofar as I am required to be as a registered officiant, legally empowered by the Internet and the state of Washington to conduct weddings.  Thirty bucks, online, registered, done.

Before it was legal for two men to get married in the state of Washington, I just did it anyway, unofficially, at the invitation of friends.   Then, when it became legal, I did it again, for the same friends, only now with a license and paperwork and the aforesaid approval of the state.  Since then, I've done it for two women, and now, for the first time, I married a husband and wife.  Everyone I've married -- so far -- has been a friend.  Friends of friends asked me once, but then thought better of it when I mentioned I haven't much to do with God so, if they wanted him invited, they'd have to do that themselves.  They went another way, as they say.  No offence taken, either way.

I have an old friend who is a proper minister; robes, degree, congregation, the lot.  He's Presbyterian, very much of the old school (think Walter Scott's Old Mortality, or better yet, the later novels of Marilynne Robinson,) and from him, no doubt, you get the authentic, traditional, God-and-all service.  I haven't watched him do it, but I'd bet you, he's pretty good at it by now.  With me, I'm afraid, it's new every time.  From me, depending, you get maybe poetry, or maybe Aristotle on "the good."

I try to be thoughtful, concise, and quick.  Quick is more important than you might think.  I've been to my fair share of weddings, commitment ceremonies, and the like.  Believe me -- even my friend, the Reverend might agree -- nobody's there for the sermon.  I may be the one in the middle, but the it's about the people either side of me.  I try to remember that.

Somebody recently asked another friend of mine to be an officiant.  My friend asked me a couple of questions, now that I'm such an ol' hand at it, so I'll answer.

Yes, I do still get very nervous.  Even though I'm reading from a prepared text, even though I've rehearsed what I'm going to say, even though I've done it before, my legs shake every time.  Every time I make eye-contact with the people getting married, I have to try not to either cry or grin like a monkey.  Yeah, it's not easy.

This last wedding was hard because these are two of the sweetest people I know.  I know their story.  I know how right it was that they should marry, how long it took to get there.  I was so excited for them, so happy I could hardly stand it.  So beautiful!  Such good people.

Two more reasons for reviewing all this here.  First, because I had a poem picked out for this last wedding, just in case, but then I didn't get to stick around long enough to read it to them.  (Probably just as well.  Poems make for rather long toasts and long toasts keep people from drinking the champagne before the bubbles die and that's not good.  Avoid the long poems, people.)  Anyway, here's the poem, by Sir Philip Sydney, of Arcadia fame:


My true-love hath my heart and I have his,
By just exchange one for the other given:
I hold his dear, and mine he cannot miss;
There never was a bargain better driven.
His heart in me keeps me and him in one;
My heart in him his thoughts and senses guides:
He loves my heart, for once it was his own;
I cherish his because in me it bides.
His heart his wound received from my sight;
My heart was wounded with his wounded heart;
For as from me on him his hurt did light,
So still, methought, in me his hurt did smart:
Both equal hurt, in this change sought our bliss,
My true love hath my heart and I have his.

That is so much better than anything I actually said, I blush to recall it.  Wouldn't have quite worked, me saying that in the ceremony, I realize, or even at the reception, but I just keep running those words through my head.  And I can't think of a couple for whom those words might better have been written than for my friends, Mr. and Mrs. Damon and Kelsey Vanhee.  (Their vows, by the way, were beautiful.)

The other reason I thought I might write something about my role in this wedding and the others I've done is just to remind any who might find their way here that there is no one way to do this; no one ceremony or service, no one text or tradition, no one wedding that needs be the only kind of wedding we know.  Times and traditions change.  You may think that a bad thing, but it's true and it always has been.  Humans are an eminently changeable, adaptable species.  Any but the most narrowly sectarian reading of history supports that truth.

To marry is to be part of something larger than ourselves alone, to lay claim to family, community and citizenship in  a way uniquely recognized in our society as both selfless and celebratory.  It is a good thing for everyone who does it with a sincere intention and a true love, and it can be, as it clearly was last Saturday when I got to help it happen again, a joy.

For me, it's been an honor, every time I've been asked to help.  If I never do it again, I will always be proud I was asked to do it at all.  I can only hope, as seems increasingly likely nowadays, everyone who wants to has the opportunity to marry whom they wish, in the way that best suits them, before, as it were, The Law.

So if you get asked, my friend, do it.  Listen.  Say what they want you to.  Say what you feel, and then get out of the way.  It's not the one in the middle that matters, but it's niced to be asked to be there.