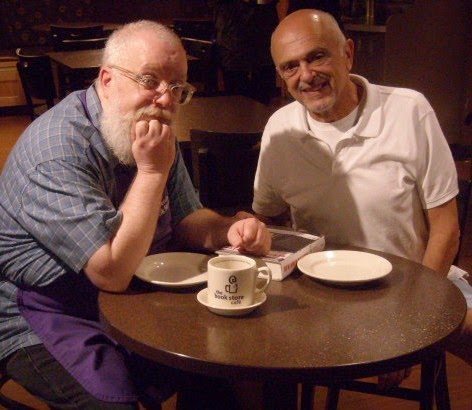 Every Thursday, my friend Nick DiMartino comes to the bookstore before it opens for the day.  He picks the books he will stock and feature at the branch of the bookstore on campus where he works.  Every Thursday for years now, he and I have had breakfast together and talked about what we are reading, among other things.  There's usually a lot to talk about.

Nick runs two book clubs, reviews for Shelf Awareness, and reads new books, particularly forthcoming books, the way other people read their horoscope in the newspaper; nearly a new one every day and always with an eye to future.  I, on the other hand seem seldom nowadays to read anything not already hallowed by the dust of our ancestors, and yet we have always found plenty in common, albeit Proust or Forster or Andre Gide.  I've never known a better read man, nor had more fun discovering new books with anyone else.  His enthusiasm is unbridled and relentless.  Most Thursday mornings I just have to ask, "so, what are you reading?" and off he goes.

This in mind, it occurred to me a couple of months ago that it was a shame not to let other readers in on Nick's conversation.  It's not like he doesn't do exactly this sort of thing all day and every day at his branch of the bookstore, but that is a somewhat limited audience.  True, there are customers who -- for forty years some of them -- have been going to the HUB branch specifically for recommendations from Nick, but why not make my friend available to the more general public?

I've spent the past year or two exploring new ways in which I might make some small contribution to promoting the bookstore's mission, without submitting over-time hours or, to put it gently, over-stepping.  New people have brought about new ideas, and the New & Used Books Department has made a major commitment to expand our presence online.  I've tried to do my part.  The bookstore's blog has come back from extinction, for instance.  We've launched a very successful Tumblr account.  I've even drawn on a couple of blackboards for displays.

So, why not a podcast?  I regularly listen to two or three of these, including at least one to do all but exclusively with books.  I don't know that any we might make would be as good, but they certainly could not be so bad as the worst I've sampled.  Seemed to me, my weekly conversations with Nick -- with some judicious if inexpert editing -- were basically ready made to the purpose.  I proposed the broadcast to Nick, who said yeas easily enough, and then to the powers that be who likewise agreed.  (Their only proviso being that we use only language suitable to broadcast and keep to books.)

I had not counted on two technical difficulties that would turn out to complicate things considerably to start.  The first being that I do not own an iPhone or similar device for recording our conversations and so would have to borrow one every week.  (My beloved husband, dear A., has addressed this problem, first by regularly, if somewhat grudgingly loaning me his, and now by buying me a new iPhone of my own, to be delivered next week, bless him.)  The other problem proved to be the more difficult to overcome, namely the very slow learning curve of the middle-aged bookseller learning a new trick.

Oh, the agonies of learning "Garage Band"!  Now, I know this will seem absurd to most people younger than myself, and to anyone else who may have had a Mac as long as I have but who may have done more with it, but even with some experience recording short readings and posting them to Youtube and then here, I felt a very old dog indeed learning a new program, however simple.  The recording I eventually managed, and dear D. at the Used Books Desk managed to email the recording to me, but even after multiple tutorials from younger, brighter coworkers, it's really taken me two months to become comfortable enough to record, edit and post to Sound Cloud a short, roughly fifteen minute podcast on the same day.  Breakfast at the Bookstore # 6 being the first, I'm embarrassed to say.  Hopefully hereafter I can continue with roughly one new podcast a week.

So, why do this at all?  (A question I asked myself quite a few times in the past two months, believe me.)  The only answer I have is this: I think that if independent bookstores are to survive, they must expand their role in not just their local communities, but in the larger community of books and readers.  The Internet need not be just a challenge to our traditional business model.  It can also an extension of our mandate to connect independent readers to the best books, an opportunity to reinforce the bonds between booksellers, a new way to communicate with our vendors, and finally, a way to sell books.  From the get, we independents have concentrated with such grudging perplexity on trying to figure out that last -- with some exemplary exceptions, like Powell's -- that we have largely failed to notice, let alone participate in the wider social revolution of the Internet Age.  Nothing could guarantee our eventual irrelevance so completely, I'm afraid, as just such a failure to see beyond our sales-figures.

Whatever the popularity or lack thereof of this effort or any of these experiments in community hereafter, the lesson here is to try, I think.  Why not?  Just look, will you, at the two fellows above who are now producing a podcast!