"We love books for their wisdom, their beauty, the pleasures they afford, and the comfort they give: they open doors to the only freedom we may know.  Let us collect them for those reasons and no other." --  Paul Jordan-Smith.

The quote above is taken from "An Unexplanatory Introduction" to For the Love of Books, published by Oxford University Press, 1934, of which the accompanying photos depict a first edition.  Paul Jordan-Smith (April 19, 1885 – June 17, 1971) was a Unitarian minister, a writer and editor. Academically, he is regarded as one of the foremost authorities on the 17th-century British author and scholar Robert Burton, author of The Anatomy of Melancholy.  He also wrote most delightfully on the subject of collecting books, as here. 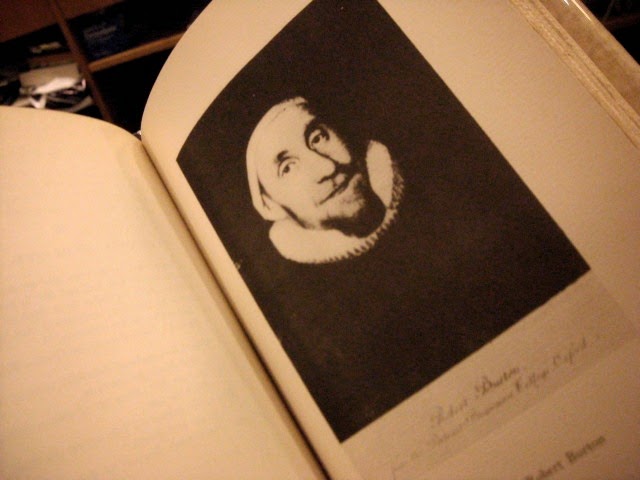 My inclination, having just acquired this copy, is to quote the entire introduction, if not reproduce the whole book, in bits, to wit, from "Collecting Americans":

"If the book that lays hold on its own generation have not some word too big for its decade, it will prove too little for even it's own century."

Or this, again from his introduction:

"The personal pronoun has been vulgarly conspicuous throughout these essays.  But I have been voicing my own enthusiasms, explaining my prejudices, and making a tour of my own library; therefore I make no apology."

I'll stop.  Find yourself a nice used copy.  It's full of good things.

Jordan-Smith would seem then a kindred spirit: bookish, earnest but charming, eccentric yet with an accessible style, curious, eager, and by his own repeated admission, "impecunious."  My kind of dead guy.  As to his poverty, keep in mind the year of this book's publication, 1934.  Seems he did quite well for himself nonetheless. (Though some of the prices quoted -- a Stephen Crane first purchased for a dime --  can still be quite startling.)

So why would I not already know this fellow or own this book?

When I was talking with Nancy Pearl for the television a couple of months back, she posited an antithesis between collector and reader, an argument I did my best to dispel.  As Nancy mentioned at the time, I am both, so I felt some obligation to defend the honor of my tribe.  Really, I was eager to deny the opposition because I think it unhelpful, if not unfounded.  In my experience, book collectors are all but invariably devoted readers, at least of the authors they collect.  Conceding the exception of the rich who can afford to pick up a First Folio Shakespeare here or a Gutenberg Bible there -- because books do furnish a room -- most of the collectors I've met have been interested in the body of the book, as it were, because they already loved the soul.  (Go on, roll your eyes, ye hoy polloi of the lending-library, ye ascetics content in your caves reading on "devices.")  Among readers, I insist, we collectors are the true romantics, the sensualists, in love with the word, yes, but also with the past, with every dimple and rib of our darlings -- you know, the way celebrity-stalkers are kind of like fans, but without what I understand are called, "appropriate boundaries."

Which brings me to the bookstore category of "Books on Books,"and why, as a rule, I don't collect them. To start, your obsessions are not as mine.  Even here, with a charming old thing like For the Love of Books,the author's fascination with Burton and all things 16th Century and older is not my really my bailiwick.  For me, Thomas Browne, yes, Robert Burton not so much.  I can appreciate Paul Jordan-Smith's enthusiasm without sharing it, but only so far.  Books about books tend to be about the other guy's obsession, and that can get a bit tired if not shared.  (As regular readers here could testify.)  The other, major drawback to books about books as a category of reading is that collectors of this kind tend to rattle like grandpa's pockets; too much noise of the coin, too many tired stories and stale treats about the ol' days, when a bargain was a bargain, a cup of coffee cost a nickel and that time George Jean Nathan found the missing scroll of Aristotle in a Gladstone-bag on the Orient Express.

That last I made up.  Still, it points to the kind of discomfort with collecting at which Nancy was hinting in our conversation, I think.  Reading about how much or how little a book may have cost, if carried on too long rather misses the point of books altogether.  Books about books are notoriously peripheral to serious criticism and even to literature, most of 'em.

Like all such sweeping conclusions though, at least from the likes of me, there are always delightful exceptions, special finds and rare pleasures.  So here I am richly enjoying a classic example of the book-about-books, and no apologies.  I'm not saying I never, am I?

“If you like not my writing, go read something else.” -- Robert Burton, The Anatomy of Melancholy.