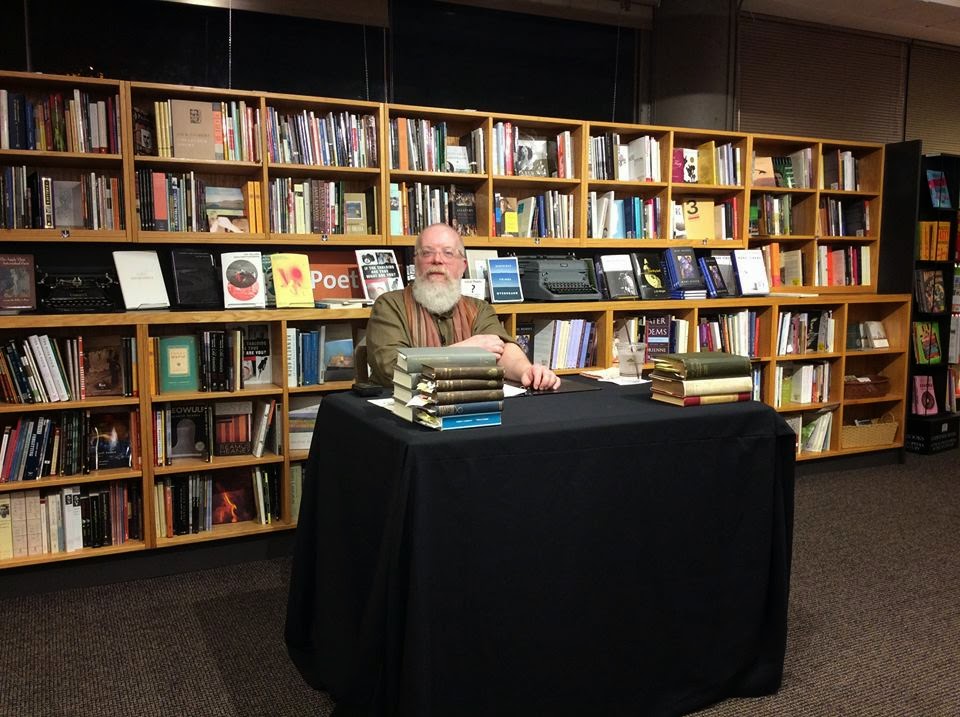 “Books are not seldom talismans and spells.”-- William Cowper

One of the most remarkable features of William Cowper's biography is the number and devotion of his friends.  Think of it.  A shy man, often ill, sometimes to the point of insensibility, living by choice if not necessity in rustic isolation, a poet little read and less known until he was nearly sixty, and yet... and yet.  His surviving correspondence fills four, fat volumes!  Everywhere in it, and in the poems, he addressed "My Dear Friend," and "My Dear Cousin," "My Dear Sir," and he meant it.

When I do a reading, I like to have my books about me.  I'm not selling these, you understand; these are my books.  I don't use them on the occasion, having long-since made a clear copy of the text I will read.  Most are still punctuated with paper-slips, notes and markers, from the research I've long-since done.  Why bring them out then and display them on the table?  In Cowper's phrase, I fear, they are but "talismans and spells."  I believe they represents the absent poet, as I do not, even when I read aloud.  I feel, as silly as it sounds, that having William Cowper's books, his biographers, his letters and his friends around me makes a magic circle of a sort and consecrates the space to the memory of the author; call it an invitation to the spirits.

Now I know that sounds rather a lot of gassy nonsense, specially from someone not much invested in the invisible, but I do still like the idea that there may be, somewhere, somehow something of Cowper, of Mrs. Unwin, Lady Austen and Lady Hesketh in the atmosphere and that whatever that may be might find it's way of evening to the bookstore.  I like to think Cowper among friends again.

As was I, tonight while I read him.  One friend, too long apart, came the furthest and made me happy in being present, as some of what I read I could not help but direct to him. Being a poet himself, I knew he would understand, as Cowper says:

"There is a pleasure in poetic pains
Which only poets know."

I was glad to have him there for Cowper then, and of course for me.  Indeed, I was surrounded tonight at the bookstore -- despite the final game of the World Series -- by friends myself, and that made all the difference.  I can only hope I did some small justice to the memory of the poet, William Cowper.  I hope more that I might have made him some new friends as well.  He had the gift of friends.  That may well be the one grace we have in common.  It is for friends I know I am most grateful tonight, and always.
Posted by usedbuyer 2.0 at 11:43 PM