Nothing Novel, Nothing Strange 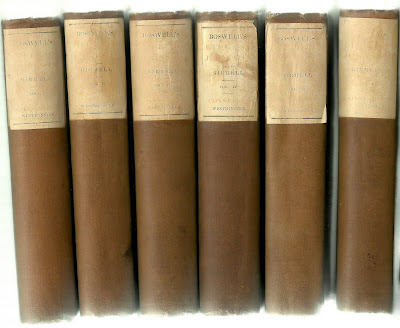 My Samuel Johnson is not handsome. I might say my Boswell's Life of Samuel Johnson, LL.D., to be clearer. Six homely little volumes, rescued from the oblivion to which they were well on their way when I found them, I bought them for myself and decided to see if I couldn't repair them just enough to be read. I'd meant to read the book again anyway, thinking that what I'd read before had either been incomplete or an abridgment, anyway something I'd never got through, for all that. Couldn't say why. I owned some monstrous Modern Library thing, the print so small and the book so big as to make reading it anywhere but in bed under a strong light impractical. When I met with this set, I was working in a different bookstore, a rather quiet used shop, and these sad little books came across the desk, scattered through a few boxes from some dear old soul's estate. I put them aside as I found them, each little book looking worse than the last, thinking the set might be worth something, even in such disgraceful shape, if complete. (It's not, by the way, even in good condition.) Eventually, I found all six. Four of the six were cracked and at least two were completely gone at the hinges. All six were filthy with dust and damage. The owner, at some point, looking I like to think to save an old favorite, had wrapped each one in a hard cellophane that had gone tacky with age, so that the stray volumes were stuck either to each other or to some other unfortunate book. Having paid just a few dollars for the set, I made a project of restoring the books as best I could.

The edition appealed to me because of it's editor, Augustine Birrell, an Edwardian essayist I like, and because of the perfect proportions of the books; neither too small to be read, nor too big to be put in a coat pocket. Took me a few hours, working on them in just my spare time at the store, to see what I had. The tops of the books were black with soot, though this came away easily enough with a thorough dusting. The worst of the work was when I had to carefully disengaged each book from it's sticky homemade wrapper, first by slitting the cellophane along the spine with a knife, and then peeling away the dry bits down to the pasted edges folded inside the books. Here and there the cellophane had stuck to the covers and had to be shaved off using a razor and some lighter-fluid. Only when the last bits of ancient amber tape and primitive plastic came away, could I assess the real damage. The labels on the spines were all more or less intact, but had faded to a near nullity, and the spines themselves had all gone brown with age. The green cloth covers were all discolored and dimpled to varying degrees, the worst this way being the third volume, which had bowed from the moisture slowly collecting under the wrapper. One of two had flecks of white paint, and at least one volume had a circle of candle-wax on the back cover. I took off whatever dirt would come away. I glued the hinges with plain white glue. I stacked all six under some heavy dictionaries and let them heal for a day or two. The glue made the hinges stiff, but, as I'd already observed, the stitching inside the spines was sound, so if I open each book quite carefully, I'm alright after the first few pages. Well worth doing, as I've found in the years, and readings, since. The result of my twenty dollar investment, and my entirely amateur efforts at restoration could ultimately not have better pleased me. This, I now think, is my favorite book, just as it is, ugly as it is, and all six, precious volumes, more mine in a way, than any others I own.

I am tonight reading this best of books, in this, my favorite edition, yet again. As the old year dies, and the New Year rises, I find myself unusually restless, and in need of good, boisterous company. I know no better among my books. I can fall into good company in any of the six volumes, at almost any page. Even in the first number, so often criticized, and justly no doubt, for what James Boswell did not know of his friend's life before they met, there is Boswell himself, and him I like. Not everyone does, but I do. I like his nervousness, and his rush, I like his chattering recitation of fact, his sympathy and his antiquated tact. For a man much criticized first for his indiscretion and intrusiveness, and then by later scholars for his prudish recasting of quotation and events, I still like his charming belief in every anecdote of the infant, intellectual Hercules, and his sincere devotion to the reputation of his mentor and friend. Some of Boswell's contemporaries, and rivals for his subject's affections, found him annoying and obsequious, and not a few considered him unworthy of the task he undertook well before his great friend died, to preserve Johnson's conversation and character for future generations, yet none proved Boswell's equal in this, just as no one since, scholar or not, has written a better book about Johnson, or a book better kept next to those that Johnson wrote. The Victorians, and none more influential than Macaulay, dismissed Boswell as a species of idiot savant, lucky in the company he kept, but no kind of writer and of a character no gentleman might like. (I love Macaulay, even in his essay on Boswell and Johnson, as Macaulay was great critic, and in his way a stylist near the equal of any critic after Johnson, excepting Hazlitt. I'm not really bothered then that Macaulay was wrong about Boswell, or anything else, much.) Later still, when Boswell's journals finally saw the light, his reputation seemed to triumph, even at the expense of the person who made his name. In the past few decades, Johnson has come up again, the Yale Edition, and the tercentenary of his birth restoring much of the luster that might otherwise have dimmed in the modern era, with scholars like Donald Greene correcting long-standing misinterpretations of his politics, and biographers like Peter Martin writing excellent and well informed new books. 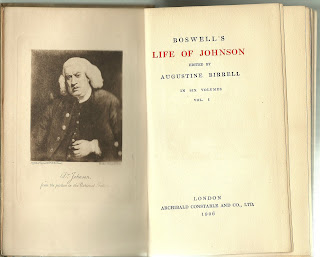 But it's Boswell I go back to.

This New Year's Eve, the husband has a head-cold. I gave it him, no doubt, and have kept some symptoms for myself, by way of keeping him company. We don't go out to parties anyway, but this year we saw the New Year in watching the celebrations in New York. One of the great advantages of living on the West Coast of the United States, we've discovered, is that we may have a kiss at midnight, by EST, watch the fireworks go off nearly everywhere but here, and then be about our business for the night. In the case of dear A., just tonight, this meant taking his dose of cough-syrup like a good man by nine-thirty and then settling into his pillows without a murmur, and for me, yet another night curled in the guest-room with my books. I'd vowed, most solemnly, to read the night and the year away in quiet contentment; reading something new, and edifying, for the New Year. But what I read in this way did not satisfy. I did not need new ideas, or gentle music. What I wanted was a bit of excitement it seemed, though even the murders I had waiting for me seemed surprisingly dull. I tried book after book, each, it seemed, further and further from my original intention. I could not settle, even with so many good options already at my elbow, until I was up and standing on a foot-stool to fetch my Boswell down from the top of the case. I was not really happy then until I'd stepped into a conversation and heard the familiar roar:

And Boswell aside right after, "Here standing erect, in the middle of his library, and rolling grand, his pause was a truly curious compound of the solemn with the ludicrous; he half whistled in his usual way, when pleasant, and he paused as if checked by religious awe. Methought he would have added -- to Hell -- but was restrained. I humoured the dilemma."

That was what was wanted; "nothing novel, nothing strange," but good old friends, conversation, and company, after all. And so, another year begun in the same old way, and all the better for that.

These old friends of mine, all six ugly little books of them, will simply have to last me another year.
Posted by usedbuyer 2.0 at 7:43 AM