For a Limited Time Only 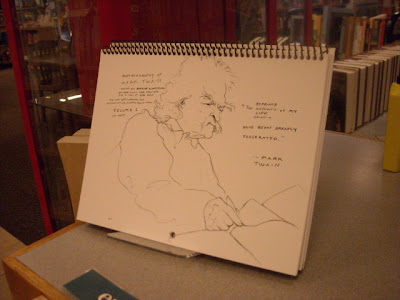 Ah, Christmas projects! Should anyone be so rude as to lift the edge of the duvet on the daybed in my office, they would find the ruins of many a clever, crafty idea, mostly to do with my making things more personal this Christmas -- or last, or the one before that. Even I don't remember just what it was I intended to do. Didn't get done, whatever it was. And yet, I would seem to have thrown nothing away... What to make of a bolt of burlap, dried corn-husks, a bag of black-eyed peas, three kinds of colored string, turpentine, shellac, paper, pens, all manner of spillage, artistic and otherwise? Wrecks, failures, flops and everywhere, everywhere the undone, the half-done, and or the half-assed.

Again this year, I had what I still think was a clever notion.

The idea was gift I could mass-produce, in a very modest way, and ship without spending too much in postage. I was not sure what the quality of reproduction would be, or if what I do with a pencil to put up here would register at all when copied, even professionally, into a calendar. Well, I was pleasantly surprised. This kind of thing has evidently come a long way from the days when I had to cut and paste construction-paper to make friend's advent calendar. (Finished that one, though he didn't find my various "surprises" as hilarious as I did. So much work, making all those little paper doors! Many of my little jokes had to explained. Always deadly. Should have just used real candy.)

Nothing wrong then with either the original idea, or even the eventual outcome. My timing though. I didn't pick my pictures until the very last, or organize them properly until I was at the counter in the copy place. Each got a Post-it with a month scribbled on it.

"And for the cover?" the clerk asked sweetly. Oh. That would be why the cover is the same as January. Wasn't thinking about a picture for the cover. Mark Twain had to do for both. 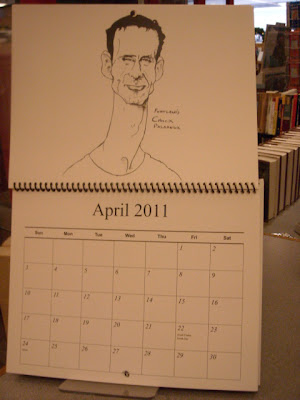 I chose the drawings I thought would register best when reproduced, rather than what I necessarily thought the best of the batch, if that was something I would ever be willing to say. I did choose some as being appropriate to the month -- Dennis Cooper for October being the most obvious, at least to me -- but really, by the time I'd finally carried the pictures to work and down the street, I hadn't thought much further than that. This selection does by no means represent a selection of my favorite authors either. Portland's Chuck Palahniuk is here because I thought the drawing would work, whatever that might mean. I also recognized that not everyone would recognize every author caricatured herein. Tried to avoid anyone unlikely to be known beyond Seattle, so no friends or booksellers, just the first twelve, of national or international reputation, and with strong enough lines to be read in flat black and white. Some worked better than others, as drawings and as subjects for a calendar. Overall though, even the strongest lose something of whatever subtlety I was able to give them with a pencil. Still, they look okay. 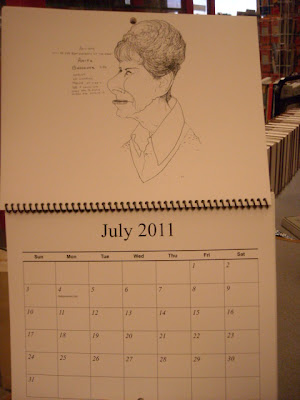 The chief irony in the final selection is that no one in my family will recognize anyone but Twain, I shouldn't think, or find anything very funny in these pictures. I sent each of the clan a copy, nonetheless, just 'cause it was something I made 'em. (Childish ego, but there it is -- like a clay ashtray from Summer Bible Camp. We did things like that, way back. Nobody thought anything of it at the time.) Even the friends to whom I'm sending copies will not necessarily want, say, Dame Anita Brookner smiling down at them for a whole month, but there we are. I did the best I could with what I had, when I finally actually did anything at all after weeks of not.

I've purposely ended up with about a dozen extra copies, so that I might make a brief experiment. Our real calendars at the bookstore where I work will see their prices cut in half come the New Year. That gives me about a week to see if anyone in the bookstore, Christmas shopping or after, will actually buy one of these things. A kind coworker created a record on the inventory system for me and made labels. I put some out on the Used Books buying desk, and my work-husband, dear J., also put a few up on the edge of the main Information Desk, without being asked, bless 'im. So now we'll see.

If I do sell one or two, I will think about maybe doing another of these next year, and try to get myself organized in better time. Never know, it could happen. Put more thought into it, and maybe make some images specifically with this purpose in mind. I'm not looking to be the late, great David Levine or anything like that, with annual customers who depend on finding a new calendar each and every Christmas. Don't know that I'll still be doing enough drawings to justify such a project, in a year's time, or doing anything like a calendar again. Just for now though, it will be fun to see if anyone I don't know will so much as pick one up to look at it. (Not a nibble so far today.) Selling these things at cost, which was too much per calendar, frankly, so there's no money to be made, but curiosity rather than capitalism was the motive, so that's alright. An exercise in Christmas ego, this, honestly, now I think about it. Oh well.

I needed a project, and at least it's done! I seem to say that so rarely, it feels rather good. That's something, isn't? Won't say that it's the thought that counts. Didn't get any of these into the mail in time. Typical. Anyway, we'll see.